Film: Hotaru no Haka (Grave of the Fireflies)
Format: DVD from DeKalb Public Library on laptop. 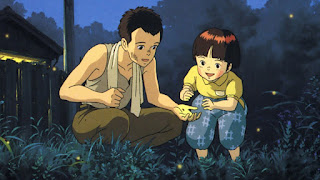 If you’re of the “animation is just for kids crowd,” you’ve picked the wrong day to come to this website. Hotaru no Haka (Grave of the Fireflies) is about as far from a kids movie as one can get. The film opens with the line, “September 21, 1945. That was the night I died.” You’re not going to get a happy ending from that. I knew going in that this was going to be a rough ride and even then, I’m not sure I was fully prepared for the emotional flensing that is Hotaru no Haka. Don’t for a moment think that this means it isn’t a great film. It is; it’s not specifically an enjoyable film, but it deserves to be spoken in the same sentences as films like All Quiet on the Western Front, Idi i Smotri, and Jeux Interdits.

What the opening means is that we know where this film is going. When we flashback to the effective start of the story (the bulk of the film is told in flashback) and meet our two protagonists, we already have a good sense of their eventual fate. Seita is a teenaged boy, probably about 15, who lives with his mother and his young sister Setsuko, who is four or five. Their father is a member of the Japanese navy and is fighting the war. The story opens at the beginning of an air raid, a massive firebombing of the city of Kobe. The kids’ mother heads to a shelter, but the kids are caught out in the bombing, but manage to get through it. Their mother, however, is horribly burned and soon dies.

The kids head to a nearby town where their aunt lives. She takes them in, but as food becomes more and more scarce, she begins to resent the addition of two additional mouths to feed and no additional income from the two children. Despite Seita providing her with all of the food he has managed to keep or scrounge and his selling of his mother’s possessions, she continues to complain about the children, and does not object when they strike off on their own, moving into an abandoned bomb shelter.

It is here that the film gets its name. The children use fireflies for light in the bomb shelter, but the insects do not live through the night. In reaction to this, Setsuko buries them, and struggles with the concept of why the insects, and their mother, were killed. Eventually out of food, Seita is forced to steal from nearby farms and to loot homes during air raids, but the food he collects is never enough. Desperate, he takes his ailing sister to a doctor, who informs him that Setsuko is dying of malnutrition. The doctor offers no help. In desperation, Seita empties the family bank account, but learns that Japan has surrendered and, since the bulk of the Japanese navy lies at the bottom of the Pacific, that his father is almost certainly dead.

It doesn’t get any happier from here. We know from the start of the film that Seita does not survive the narrative, and we also know that he does not have Setsuko with him in his moment of extremis. That what happens is a foregone conclusion does not in any way detract from the emotional suckerpunch of seeing it in front of us.

Hotaru no Haka is one of the most emotionally ripping films I have experienced. For those who are of the opinion that an animated film cannot carry the emotional gravitas of live action, I can only shake my head. Its emotional impact is on a level with the films I mentioned above--Idi i Smotri and Jeux Interdits come to mind immediately. There is no lessening of this power because the children depicted are cartoon characters. They don’t act like cartoons. They act like kids and they sound like kids. The dubbed version of the film is decent, but the true emotional impact of this is felt in the original Japanese version. Ayano Shiraishi, who voices Setsuko, is poignant and brilliant throughout.

There are plenty of films in which terrible things happen that do not affect me as strongly as does this one. There’s a reason that I mentioned the films in the previous paragraph that I did—they share not only the anti-war theme of this film, but also the extremely important element of the victims of that war being innocents. There is something particularly awful about the loss and destruction of innocence. We want these kids to have normal lives and we know from the start that it’s not going to happen. All we can do is watch their slide down to their eventual destruction.

There are moments of lightness, of course. There have to be. The fireflies, which float through any number of scenes, are an obvious metaphor for the brief but beautiful lives of these two kids. Just as important is the tin of fruit pastilles that starts as a connection to their lives and ends the film as so much more.

It’s heartwrenching. It’s also beautiful and tragic and gorgeously animated. Hotaru no Haka is the definition of a “must-see” film.

Why to watch Hotaru no Haka: One of the great anti-war films ever made.
Why not to watch: It’s wrist-slittingly depressing.

Email ThisBlogThis!Share to TwitterShare to FacebookShare to Pinterest
Labels: drama, Grave of the Fireflies, Hotaru no Haka, Isao Takahata, war