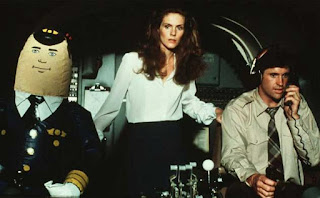 I had plans tonight to watch something emotionally draining and fairly long. Those were my plans at least. I decided that I’d had a pretty rough week and needed something easy, something light and stupid and silly and funny. Airplane! it is. Airplane! was made in a time when people actually understood parody, something the seems to be a lost art based on what passes for a parody film these days.

So here’s the short version if you’ve managed to somehow skip this film. An ex-Air Force pilot named Ted Striker (Robert Hays) has been unable to get near an airplane or even hold a steady job since a terrible war experience. This has caused his stewardess girlfriend Elaine Dickinson (Julie Hagerty) to dump him and get on with her life. However, Ted decides to follow her on her current flight to Chicago. The plane is a Noah’s Ark of personalities and includes a young girl who needs a heart transplant.

Since Airplane! is a parody of disaster films, specifically those of the Airport genre, there has to be some serious complication. In this case, the complication is a serious case of food poisoning. Pilot Captain Clarence Oveur (Peter Graves), co-pilot Roger Murdock (Kareem Abdul-Jabaar), and navigator Victor Basta (Frank Ashmore) all eat the fish and all get horribly ill. Naturally, only former pilot Ted is on hand to land the plane, and the only help he’ll get from the ground is from multi-substance-addicted Steve McCroskey (Lloyd Bridges) and his old hard-nosed commander, Rex Kramer (Robert Stack). Additionally, he has Dr. Rumack (Leslie Nielsen) on board to help with the sick passengers.

Okay, that’s the plot, but that’s not really the point here at all. The point is that there is a joke about every three seconds in this film, and often there are multiple jokes going on at the same time. The jokes hit swing at everything, and not everything works, of course. I’m guessing that there are a couple of hundred jokes that I’ve never gotten because I’ve never noticed them or never understood the reference. But that doesn’t matter, either. The whole point of Airplane! is that the jokes do not stop coming ever. Directors Jerry and David Zucker and Jim Abrahams also wrote the script, and they put in every possible gimmick they could think of, none too stupid.

That, more than anything is the point. Airplane! runs a very quick 88 minutes and a good reason for this is that it just couldn’t be sustained any longer.

The problem in terms of writing this up is that the vast majority of the jokes don’t translate to text at all. There are terrible puns throughout, sight gags abound, and goofy cultural references everywhere. But there’s no good way to really describe what’s going on here. It’s constant, and while it isn’t always funny, it’s funny consistently enough that if you don’t at least crack a smile every couple of minutes, you are likely lacking a pulse or a sense of humor. Seriously, despite having seen this film multiple times, I still laugh out loud at dozens of places in this film. It might well be the funniest film I’ve ever seen, and for the most part, there’s not a single guilty laugh in the whole thing. They’re all genuine.

I’d be remiss not to mention Stephen Stucker, who plays Johnny. Johnny is an imp of a character who really can’t be explained, but a lot of the gags and insanity of the film are is, as are a lot of the fourth wall breaks. He almost universally becomes everyone’s favorite character.

So, it should be pretty evident that I’m a big fan of Airplane! but I wish it was easier to translate just what makes it so genius. Genius it is, though. It’s not always appropriate for the younger kids—there are a couple of sexual jokes in places that might be a little bit racy for younger viewers. Additionally, many of the references (like those to Saturday Night Fever and From Here to Eternity) will pass over the heads of a number of younger or less film-savvy viewers.

If you haven’t seen this, go see it. Now. Seriously, your life is lacking without this film.

Why to watch Airplane!: Uninhibited, pure comedic genius.
Why not to watch: The state of modern parody.