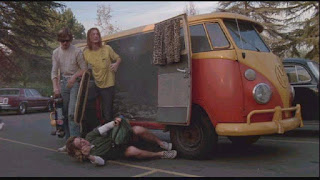 I wonder when watching a film like Fast Times at Ridgemont High if an actor like Sean Penn looks back at it, does he do so with fondness? I imagine he probably does. For what is otherwise a funny but ultimately throw-away teen comedy from the early 1980s, Fast Times has a huge number of people in it who went on to do a hell of a lot more, like Penn. This has to be one of the reasons it was selected for The List. In addition to Sean Penn and Jennifer Jason Leigh and Judge Reinhold (an icon in and of the ‘80s), we get appearances from Forest Whitaker, Eric Stoltz, Anthony Edwards, and Nicolas Cage before he changed his name from Coppola. It’s also the debut screenplay from Cameron Crowe. For what most people think of as a teen sex comedy, it’s got a pretty good pedigree.

The other, were I to venture a guess, is that it’s one of the rare teen films that blends the sort of raucous sex-and-drugs comedy that most of its key demographic are looking for with some actual drama. If it’s been awhile since you’ve seen this, you may forget that there’s more than just Sean Penn getting stoned with Eric Stoltz and Anthony Edwards and Phoebe Cates taking off the top of her swimsuit here.

This one is kind of plotless, more or less following the lives of several teens at Ridgemont High. First is Brad Hamilton (Judge Reinhold), a high school senior who wants to break up with his girlfriend for no reason other than to play the field, but who is stymied from this desire when she breaks up with him. Another important player is his sister, Stacy (Jennifer Jason Leigh), who, at 15, is concerned that no guy will ever want to have sex with her. She is constantly pushed toward sex by her friend Linda (Phoebe Cates). Mark “Rat” Ratner (Brian Backer) has a crush on Stacy, but is usurped by his friend Mike Damone (Robert Romanus), a ticket scalper. Running through all of this as sort of a stoned Greek chorus is Jeff Spicoli (Sean Penn) and his collection of fellow wasted surfer dudes, who fight constantly with the high school faculty, particularly Mr. Hand (Ray Walston).

So let’s get to the meat of this, past Sean Penn whacking himself in the head and shouting about how that was his skull. Fast Times at Ridgemont High was one of the first mainstream films that made the shocking claim that young girls are as curious about and desirous of sex as teenaged boys. Sure, there were films with girls wanting sex in the past (look no further than Faster, Pussycat! Kill! Kill), but those women tended to be depicted as aberrations of the rule. The girls in this film are typical, normal girls who just want sex. And all of this becomes serious when the 15-year-old Stacy gets pregnant from a far-too-short tryst with Mike Damone.

But really, no one is watching Fast Times at Ridgemont High for a treatise on abortion or safe sex, are they? While there are elements of drama here, this is first and foremost a comedy, and the appeal was to the Jeff Spicoli crowd more than anyone else.

My biggest issue with this one is that it hasn’t aged very well. It’s very much a product of its time, and it’s a time that hasn’t stuck around. While some of the situations are still funny and even relatable to the present day, this is not a film that carries the same weight it did 30 years ago.

And that’s really it—this film is required viewing to understand the ‘80s in a lot of ways, but it isn’t a film that carries over into now. That’s not unusual with comedies. Many are very much a product of their times and remain in their times. Fast Times at Ridgemont High just doesn’t hold up this long after the fact. It’s a shame, but it’s also the truth.

Part of this might also be the fact that I’m older now, and the things that I thought were really funny once aren’t as funny now. Seriously, Mr. Hand has gone from being this complete prick of a teacher to a guy I look at as a role model and even a hero. Mr. Hand is badass. More teachers should be like him. If you’d told me 30 years ago that someday I would say that, I’d have called you a liar.

Why to watch Fast Times at Ridgemont High: You can’t understand the ‘80s without it.
Why not to watch: It hasn’t grown up, despite its age.