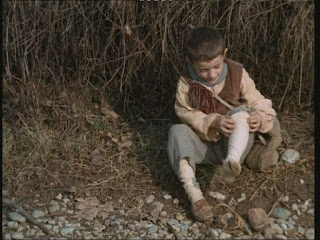 What are we to make of L’Albero Degli Zoccoli (The Tree of Wooden Clogs)? This is a film that runs just shy of three hours (178 minutes and change) and a great deal of the first part of this film—actually all of this film—is about setting up the time and the place and creating an entire world around the simple lives of the peasants who populate the film. In truth, the entirety of this epic can be summed up in a sentence or two, but reducing the story to a couple of sentences would remove the importance of seeing these lives and learning about the people who live them.

But really, the story is as simple as it gets. The main story of the film boils down to this: A peasant family in Italy at the end of the 19th century has a son who appears to have some gift for learning, so they send him to school rather than put him to work on the farm. One day, the boy breaks his shoe on his long walk home from school and the family does not have enough money to get him a replacement, so the father (Luigi Ornaghi) chops down a tree on the property of the man who owns the farm where the peasants work and live. Eventually, this leads to problems, as cutting down the tree is akin to stealing from their employer. That’s really it.

Along the way, though, there are plenty of small stories and big events that happen. Essentially, while the wooden shoe and the tree are the central point of the tale, this is more or less an epic film about the lives of this collection of four peasant families who live in the same house and work the same land, and are forced to give over 75% of everything they grow to their landlord. We see them go through their daily routines and through all of the different experiences of farming through an entire year. There are courtships and a marriage. Crops are planted and fertilizer harvested to ensure a better crop. People work in the fields and wash clothing. Life goes on around this story, almost to the point of there being very little in the way of story at all.

There is, almost in spite of itself, a haunting quality to this film in its so-slow-its-almost-stopped pace. The peasants become something more than they are to us as we experience their lives vicariously. But it’s slow. I mean really slow. There are times when it’s difficult to stay awake here (I was forced to jump back to earlier in the film more than once when I drifted). I think that’s an intended part of the film. While not precisely dream-like, there is a dreamy quality here, or one of natural rhythm that both pulls the viewer in and also orces the viewer’s mind to wander off.

L’Albero Degli Zoccoli is a difficult film to dislike mostly because of this sympathetic portrait of the people and because of the gorgeous camera work and cinematography. It’s also, for me, a film that is nearly impossible to love. I appreciate this film for what it is and for what it sets out to do, but the slow pace is a real detriment. I liked these characters for who they are. At the same time, I could have wished for something a bit…snappier.

This is a pretty film, and one that I can be happy to have watched, but it’s also one that I’m not sure I’m willing to sit through a second time. Olmi certainly has a message he’s trying to get across here, and I’m certain that my lack of Italian citizenship and my equal lack of history of the time does me a great disservice in this respect. Even with the layers pulled back, it appears like little more than a film about a group of peasants and a particular action that results in bad luck.

Ultimately, I see a lot worth seeing in L’Albero Degli Zoccoli, but I’m not completely sure it’s a film I can recommend to most. Its pace is its greatest strength, because it is this slow track through time that allows us to really care about and worry about the people in their little collective. But this pace is also the most likely reasons for this film to turn someone off to it. At three hours, it just might be too much.

Why to watch L;Albero Degli Zoccoli: It’s beautiful.
Why not to watch: For a three hour film, it sums up in a sentence.