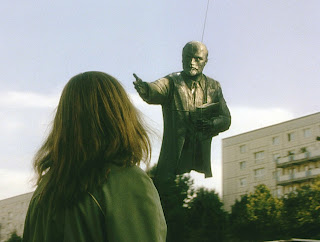 One of the great things about the movies is that they are a tremendous opportunity to play make believe. With a good premise you can get away with almost anything. Good Bye, Lenin! is that sort of a film, one that banks on an unbeatable idea for a story and then plays it out by sticking to it as closely as it possibly can. I love it when a film buys into its premise so completely.

In the late 1970s, the father of a family in East Berlin vanishes to the West on the day that the first German launches into space. His wife, Christiane (Katrin Sass), throws herself into becoming the very best citizen of East Germany that she can. In 1990, as the times are changing, she witnesses her son involved in a protest. As her boy Alex (Daniel Bruhl) is tossed into a police van, she collapses. This near-fatal heart attack leaves her in a coma for months.

As it turns out, she misses some important months. Specifically, she misses the beginnings of the reunification of East and West Germany. The West invades what used to be East Berlin. Christiane’s daughter Ariane (Maria Simon) quits college, gets a job at a Burger King, and has her new boyfriend Rainer (Alexander Beyer) move in to the family apartment. Alex loses his job in a television repair shop, but gets a new one installing satellite dishes around the city. He also starts a relationship with Lara (Chulpan Khamatova), who happens to be Christiane’s nurse.

And then Christiane wakes up. Alex and Ariane are told that any additional shocks will likely kill her, because she will not survive another heart attack. Desperate to protect his mother as much as he can, Alex recreates his mother’s room and brings her home from the hospital. He monitors everything, rigging a television to a VCR so that she can only watch videotapes of old broadcasts. He tells everyone who visits to maintain the fiction that the reunification has happened. When a Coca-Cola banner goes up on the building across the street, he and his work friend Denis (Florian Lukas) fake a news report and play it for her to explain it away.

It’s desperately sweet and sad and beautiful. It’s also filled with some tremendous imagery, like Christiane wandering outside the apartment at one point and being confronted with a helicopter carrying off a statue of Lenin with one hand outstretched. It’s also desperately funny. After the statue moment, Denis and Alex rig another fake broadcast. Denis, wearing a fake mustache and no pants under the desk, presents the fable that the situation is so bad in West Germany that East Berlin has opened its gates to anyone willing to come.

Of course it can’t last, and it doesn’t, but it’s a fantastic ride getting there. It does strain the limits of believability. Alex’s scheme is sweet and tragic, and because of it, something beautiful to watch. The ending is perhaps inevitable as well, but is also pitch perfect.

It’s also far more complicated and involved than I’ve let on here. A great deal happens with the reunification; in particular, it means that Alex’s and Ariane’s father is now a part of their lives. Eventually, it comes out from Christiane that he didn’t run away from the family to be with another woman, but to lead the way for all of them to escape to the West. When suspicion came down, Christiane decided to stay with the children to protect them. This, like much of the rest of the film, is beautiful and tragic as well.

Were parts of the film not so terribly serious, Good Bye, Lenin! would be the modern equivalent of a screwball comedy. In parts, it is. Alex’s desperate search for an empty jar of East Germany pickles he can use to pretend that the old brand is still available, for instance, takes on a life of its own through much of the film. It’s a common refrain that he garbage picks for empty containers to maintain the fiction of old products and is frequently interrupted by a disgruntled neighbor who is frustrated at being suddenly out of work and forced to pick through the trash himself.

It’s worth saying here that I was in Berlin in October of 1990, exactly one week after the official reunification of the two sides. It was a fascinating time to be there. It was also a happy time for just about everyone we met.

Good Bye, Lenin! is a special film, and a nearly perfect blend of comedy and drama, and most importantly, a deep love of a son for his mother. This is another film I’m happy was on The List, because I’m extremely pleased to have seen it.

Why to watch Good Bye, Lenin!: One of the best premises you’ll ever encounter.
Why not to watch: It strains believability.