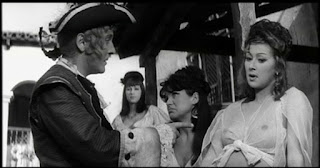 When I write a review, I do my best to come up with a title that really exemplifies the film in question. I’m not always that great at it, but sometimes I get it right. With a film like Rekopis Znaleziony w Saragossie (The Saragossa Manuscript), the word above is as perfect as I can get, and for the record, I did have to look up the term. An ouroboros is a snake eating its own tail, a long-used symbol for cyclical happenings and self-reflexivity. If I’ve ever seen a film more self-referential and more devouring of itself than this one, I have no memory of it. More likely it’s because this is the most spiraled-inward film in existence.

The problem here is that there is so much self-reference and reflexivity that the film becomes incredibly difficult to follow on a first viewing. In the first part of the film, we get a series of repetitions, actions that happen repeatedly with slightly different results each time. The second part consists of a series of stories within stories within stories, a narrative matryoshka. One person tells a story that involves another person telling a story, that includes a story from another person, and on and on. It’s Inception before anyone had the special effects budget to spin a hotel corridor around. If Russian nesting dolls aren’t your thing, you can consider this a series of nested quotes or parentheses within parentheses within parentheses.

We start with a soldier in the Napoleonic Wars who hides in a hotel only to be captured by his enemies. He is captured because he has discovered a book that has engrossed him completely despite his not being able to read it. His captor can read it, and begins to, discovering that it was written by his grandfather, a military captain. The story involves the captain spending an evening at a haunted inn where he is accosted by two sisters who claim to be his cousins and both wish to marry him, provided he converts to Islam.

Eventually, the sisters force him to drink from a goblet made of a skull. He passes out and wakes up under a gallows, where he meets a hermit who is helping to cure a man who tells a very similar story about the same deserted, haunted inn. The captain leaves again, is captured by the Inquisition, and is rescued not only by the two sisters, but also by the men he saw hanged on the gallows. Forced to drink from the skull goblet again, he again awakens under the gallows, this time encountering a follower of the Kaballah. This leads us into the second part of the film.

Here, we get the series of stories mentioned above. I’m not going to try to make sense of the stories within stories here, because it’s not too long before we’re so far down the rabbit hole that we’re beyond lost. I’m not sure it’s possible to follow it completely on a first viewing or even a second viewing. The stories aren’t merely nested, but frequently intertwining. Characters appear in a story only to tell their own stories later. Eventually, after stories and stories and stories, we come back to the cabalist and the captain and the two sisters and their uncle and the writing of the manuscript that got us started in the first ten minutes of the film.

With as far down as this film goes—much further than, say, “Cloud Atlas,” I’m not ashamed to say that I was simply confused through the last hour. Don’t take this to think that I didn’t enjoy myself, though. Rekopis Znaleziony w Saragossie is a film that allows the viewer to enjoy being completely confused. Each of the stories is entertaining in its own right, and while I’ve certainly lost bits and pieces of them or misunderstood them or simply not understood them at all, I enjoyed the hell out of watching them.

Part of the reason for this is the comedy with which many of these scenes are played. There’s no specific “laugh out loud” moment, but there are pieces of comedy throughout that range from the subtle to the broadly slapstick. It’s really difficult to dislike a film when it’s so evident that the actors and the director are having such a good time with the material.

There are times when Rekopis Znaleziony w Saragossie seems to move very quickly and other times when it feels much longer than it is simply because of the layers of narrative. At close to three hours, it’s also not a film that I would typically recommend multiple viewings, but this one requires it. Fortunately, a rewatch or two are not much of a chore, since it’s a lot of fun to see unfold.

In the interest of full disclosure, I should mention that there is a vast amount of corset-enhanced cleavage thanks to the period elements of the film. So, if you need another reason to see it again, there you have it.

Why to watch Rekopis Znaleziony w Saragossie: Because it’s fun to try to unravel it.
Why not to watch: It’s impossible to unravel with a single viewing.