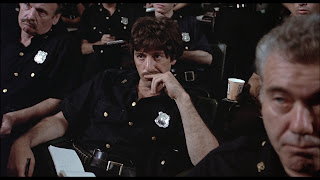 Serpico is a film that is right in line with a lot of American sensibilities, I think. It may also be in line with the sensibilities of other nations; since I’m not as aware of what the typical Norwegian or Spaniard or Sri Lankan have to say about particular character types, I’m not willing to suggest that Serpico is a universal story. It may well be, though. It has the familiar feel of 12 Angry Men, a lone character standing alone against a group who wish him ill. That the lone man stands for truth and justice and honesty is only natural. That in this case it is based on a true story makes it something exceptional.

The film opens with Frank Serpico (Al Pacino) being rushed to the hospital after being shot in the face on a drug bust. We’re unaware in the moment of what might happen to him or if he will survive the car ride, let alone once he gets to somewhere he can be treated. A few frantic phone calls suggest that Serpico’s wound might well have been inflicted by another officer. From here we flash back to Frank Serpico’s graduation from the police academy.

What we discover along with Serpico is that every cop in New York City appears to be on the take. It starts in little ways—a restaurant owner giving the local beat cops a free lunch (and resenting it when Serpico asks for something other than what was suggested). Even here Serpico’s natural honesty comes to the front, offering to pay for his lunch to get something he actually wants. He also learns that many of the cops are more concerned with following procedure and stealing credit than they are with actually preventing or punishing crime.

Eventually, he makes his way into the plain clothes division and learns that the free lunches of the beat cops are actual real payoffs for the cops with a little more pull. On his first day, he is handed an envelope of money. Being honest, he tells his fellow officer Bob Blair (Tony Roberts), who helps him report the corruption up the food chain. And this is where Serpico’s frustrations begin to mount. It appears very much as if the cops at the top of the ladder are willing to turn a blind eye to the rampant corruption in the police force.

Even transfers don’t help. No matter where he goes, Frank Serpico finds every officer receiving money on a daily or weekly basis. Some of the schemes are elaborate, involving bagmen making pickups and distributing shares to the other officers. In other cases, retired officers make the pickups to prevent those on active duty from being liable for the payoffs. Serpico quickly develops a reputation of being the one guy who won’t take the money, even when his partner does. This leads to suspicion, distrust, and eventually outright aggression.

While there is a plot here, Serpico is more about the experiences of the real-life officer who lived the story. It’s something between a narrative and a character study. There’s not quite enough of just Serpico for a true character study. It is, though, absolutely compelling. This is partly because it is based on reality (although I do not know how much reality it is based on. The text at the end indicates that it’s fairly close to the truth, though). It’s also because there is that natural story of someone standing up for what is right and decent in a world that is anything but.

The whole film centers around Pacino’s performance, and it is a masterful one. He hadn’t yet achieved his trademark level of histrionics, but Frank Serpico comes close. The main character trait that comes through beyond his dedication to his ideals is his obsession with the corruption he is facing. In fact, this leads to the eventual destruction of virtually every relationship he manages to establish, even forcing his fiancée Laurie (Barbara Eda-Young) to leave him.

Serpico would feel like a Hollywood movie were it not for the real guy. It’s a tried and true story, though—the one person who can’t be bought or paid off and for whom honesty is not only the best policy, but the only policy. Audiences can’t seem to get enough of the story, especially when the hero ends up vindicated in the end. We love it when the little guy fights the good fight.

Because of that, though, the story may seem hackneyed. Don’t let it dissuade you, though. This one is worth it for Pacino.

Why to watch Serpico: Pacino doesn’t get much better.
Why not to watch: Despite being based in reality, it’s a story you’ve seen before.