Film: The Cool World
Format: Video from The Magic Flashdrive on laptop. 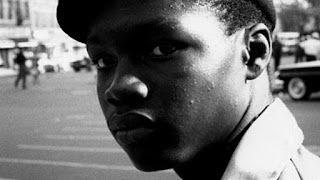 When I started this blog three and a half years ago or so, I made the commitment that I’d write full and complete reviews of every film. While I’m certain there are a couple of films that have gotten short shrift, in general I put up 750 words or more on every film (sometimes a lot more). This causes problems when I come across a film like Shirley Clarke’s The Cool World. When I looked for pictures of this, most of what I found were shots of Dizzy Gillespie. For the life of me, I thought this was going to be an underground documentary on jazz. Now that I’ve seen The Cool World, I’d have rather watched jazz.

For this being an independent film, it’s actually pretty straightforward. A young kid in Harlem named Duke (Rony Clanton) wants nothing more than to get a gun from a man named Priest (Carl Lee). With this gun he hopes to take a leadership position in his gang, the Royal Pythons. His goal with the Pythons is to get them to start rumbling again.

It’s not that difficult to get the subtext here—this is more or less the story of Duke attempting to prove his manhood. Duke’s identity is tied to his ability to acquire the $50 necessary to purchase the pistol, and thus become a man of substance in the world he inhabits.

As such, while a standard story, it’s not a bad one. It’s the same story that gets retold now and a again. It’s possible that a film like Boyz ‘N the Hood might not exist without a film like The Cool World to lead the way. Like any good urban or gang drama, conflict comes from both within and without. The Royal Pythons have a feud with another local gang called the Wolves. Additionally, Duke’s looking for a piece is specifically so that he can compete with the current gang president, Blood (Clarence Williams III). The patter of the characters as well as the slang puts me in mind of The Warriors, which I know came after this. It wouldn’t shock me too much of Walter Hill found this film as an inspiration for his.

The issue I have with this film is that it’s incredibly cheap. The film stock is cruddy, and the sound is for the most part obviously overdubbed. It’s not so much that the film is bad, but that it’s incredibly amateurish, and this unquestionably detracts from the overall effect. It’s certainly a decent film by amateur standards, but by professional standards, it’s really lacking.

This is also true of the acting, despite having a few people who would go on to have decent careers. It’s easy to tell when someone with acting chops walks across the screen. Clarence Williams III, who plays Royal Python leader Blood, is a case in point. He’s not recognizable this young, but it’s immediately evident when he appears on screen that this is someone who can really act. Antonio Fargas shows up, too, although he’s in a minor role.

And unfortunately, I don’t have much more to say about this film. It’s a fairly standard story that has been done better and far more professionally in the years since, and frankly before as well. It’s notable perhaps because of the all-black cast and the modern urban environment and for its Dizzy Gillespie soundtrack (which explains why I find pictures of him when I looked for stills of this film). But I can’t get over the feeling that Shirley Clarke spent more on the soundtrack than she did on anything else.

Why to watch The Cool World: A classic story in a new environment.
Why not to watch: It’s unprofessional.