Film: The Killing of a Chinese Bookie
Format: Streaming video from Hulu+ on laptop. 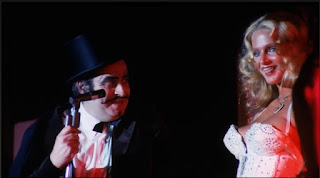 There’s something about film noir that I find attractive and compelling. I can’t get enough of it. Technically, film noir is a style, not a genre but I don’t really care that much about the specific definition of such things. I dig film noir, and when it’s done well, I like neo-noir just as much. Anything that touches on these sensibilities I find interesting, at least when it’s done well. The Killing of a Chinese Bookie is done relatively well. It just doesn't quite feel as realistic as it should.

Cosmo Vittelli (Ben Gazzara) is the owner of a strip club. As the story begins, he has just finished paying off a debt to a loan shark (Al Ruban). With his debt paid off, he decides to celebrate. He takes three of his dancers out for a night out. Cosmo ends up at a poker table where he is extended a very large line of credit by the people who run the game, who turn out to be the Mafia. Cosmo’s luck doesn’t change, and he runs up another massive debt. In the whole to the Mob for $23,000, Cosmo finds himself in a difficult situation—he’s at the mercy of a group of very difficult, impatient men who don’t take no for an answer and who don’t care about which side of the law they are on.

Fortunately for Cosmo, the Mob is willing to let him work off his debt. Unfortunately for him, the job isn’t a tasteful one. If you’ve noticed the name of the film, you have a good idea of what they want him to do. They want him to bump off a small-time bookie in Chinatown, someone who has been giving them problems. They suggest he spend a day in Chinatown and look for the man in question. He goes, but spends the day in a theater, since he’s not interested in killing anyone. However, he’s ultimately not given a choice.

What he doesn’t realize is that the man he is supposed to kill isn’t a small-time bookie, but the man in charge of the Chinese Mob. He also doesn’t realize that no one expects him to come back alive. In a sense, the hit is a gamble. If Cosmo is successful, the mob gets rid of a serious enemy. If he fails, well, there’s no connection back to them, and the $23,000 loss is just a loss. The gamble pays off and Cosmo makes the hit successfully, but is wounded badly in the shootout. The last half of the film concerns him dealing with his potentially fatal injuries, evading the Chinese Mob, and dealing with the men who set him up.

The Killing of a Chinese Bookie is noir as stripped and pared down as it can get despite being in color. The bulk of the film happens without music. Even the scenes in the strip club happen without music except for some a capella songs. There are no niceties here. Writer/director John Cassavetes goes right for the grit and stays there. It plays out like a dark slice of real life.

It reminds me in particular of Odd Man Out, another pseudo-noir in which a man is badly injured committing a crime and spends a good percentage of the film trying to figure out what happened and get back to safety. That basic idea is really all the two films have in common, though. There is a sense of ideals in Odd Man Out, even if they are potentially misguided. Here, it’s pure survival and nothing more. Cosmo isn’t fighting for some grand ideal or the betterment of his people or against oppression. He’s killing someone to void a debt he incurred playing poker and nothing more. This film feels grimier, but also much more real because of it. It’s seedy, and never strays too far from Cosmo’s world of half-nude women, frustrated lust, and crime.

This is not to say that this is a perfect film by any stretch. There are several points with which I take real issue. First is the killing itself. It happens as if Cosmo has been doing this sort of thing all his life. He gets past the guard dogs the way he’s told to—with a sack full of hamburgers, but then he just has the run of the house. He walks past guards and searches the house for his victim as if he lives in the place.

More importantly, it’s not evident that Cosmo has been wounded until much later, because he acts as if he hasn’t been. Even when the wound is revealed, he goes right back to acting as if he’s perfectly fine, heading back to his strip club and just hanging out rather than, you know, writhing in pain like a man who’s just been shot.

The Killing of a Chinese Bookie is a great idea for a film. It’s gritty and dangerous and exciting. It’s just not that realistic despite the emphasis on making this as real life as possible. Had Cosmo not been injured at all, it would certainly have changed the last half of the film, but not completely, and might have made for something that stuck to its realistic and believable premise. This is a flawed film, but one that is still worth seeing.

Why to watch The Killing of a Chinese Bookie: Neo-noirs don’t come any better.
Why not to watch: Evidently, a gunshot wound can be shrugged off.