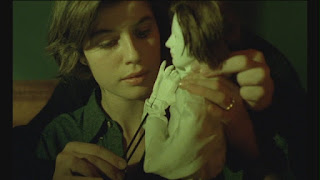 Krzysztof Kieslowski may well be the most spiritual of directors I have ever encountered. All of his work, at least all of his work that I’ve seen, is imbued with a a spiritual quality that comes across as genuine, simple, and beautiful because it isn’t forced. It’s honest and, for lack of a better word, pure. This is definitely true of Dekalog and of the Three Colors films. It’s also almost immediately evident in La Double Vie de Veronique (The Double Life of Veronique). This is a film of simple beauty and pleasure, and sadness.

We spend the initial part of the film with Weronika (Irene Jacob), a singer in Krakow. She attends a rehearsal for a men’s choir and, unable to control herself, accompanies them, which draws the attention of the choir director, who asks her to audition. When she leaves, she walks out into the middle of a demonstration that is becoming violent. Across a plaza, she sees a tourist board a bus; the tourist looks exactly like her.

Weronika’s exceptional talent allows her a successful audition, but she seems haunted and troubled by something, and looks ready to collapse from a pain in her heart. Later, when performing with the choir, during a solo, Weronika collapses and dies on stage. Sad, of course, but Kieslowski’s work always has an intense spirituality to it, and Weronika’s death is almost as if she could no longer contain her own joy and wonder at life.

From here we switch characters to the titular Veronique (also Irene Jacob), who we meet mid-coitus with her boyfriend. Veronique, of course, is the tourist we saw on the bus in Krakow, and is Weronika’s double in all ways, including name. Despite the distance between Krakow and Paris, she is somehow aware of Weronika’s death and burial. Her life changes at this point, moving in a variety of unexpected ways.

Like our original Weronkia, Veronique’s life is tied up in music. She’s not a singer, but a teacher of music. At her school, she sees a puppet show in which a ballerina breaks her leg and then turns into a butterfly. She encounters the puppeteer later and so begins a very strange sort of courtship. The puppeteer is Alexandre Fabbri, (Philippe Volter) an author, and the puppet show is based on one of his books. And there’s a connection here—it appears that Fabbri has become as obsessed with Veronique as she is with him. She begins receiving mysterious gifts in the mail, all of which are connected to one of his stories. She also receives a cassette at her father’s house that consists of a variety of seemingly random sounds. With a little detective work, she tracks down where the cassette was recorded and finds Fabbri.

There is a sense of fantasy to La Double Vie de Veronique but not of high fantasy. It’s almost magical realism, but there’s not quite enough magic there to call it that. Instead, it’s merely the outer reaches of human experience, just barely in the realm of believability, and yet still maintaining that element of the fantastic.

One aspect of the film is a constantly repeated piece of music. It’s what Weronika is singing as she dies and the song that Veronique is working on with her students. We hear it over and over, not as a sort of refrain, but more as a touchstone, a constant centering. We are consistently brought back to the same thing, the same piece of choral and orchestral music to continually keep us grounded in the shared mental and emotional world of Weronika and Veronique. It’s the same sort of thing Kieslowski did in Three Colors: Blue in particular, using the music in large part to track our journey through the story.

I seem to have recently gone on a kick of films that have this dreamlike quality to them, films that seem grounded in reality but also seem to touch another world tangentially. La Double Vie de Veronique is the best of these that I have seen recently, the most interesting and the most spiritually dense. It’s a beautiful film, but I expected no less from Kieslowski.

Since this film touches on the spiritual as it does, it’s also a film that translates into a meaning both easily and with great difficulty. The story is easy to understand, but its meaning is a sort of tabula rasa, allowing the audience to attach whatever deeper meaning they see fit to give it. For me, La Double Vie de Veronique is a film about connection and interconnection, the idea that there are things that connect us all, often in ways that we sense without truly understanding. That’s my read, but there are likely dozens or hundreds of others.

Why to watch La Double Vie de Veronique: It’s beautiful.
Why not to watch: It might be a little too dreamy.