The Last of the Titans 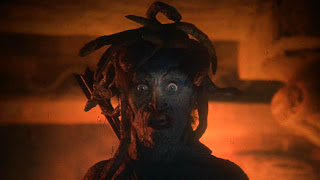 The world lost Ray Harryhausen today, and the world is worse off for it. The man was, pardon the pun based on today’s film, a titan in the industry. Like a lot of people in my generation, I grew up on some of Harryhausen’s best work--The Golden Voyage of Sinbad and most especially the original Clash of the Titans. The man was special in a way that we’ll probably never see again. Nick Park at Aardman is probably the closest we’ll ever come again to what Ray Harryhausen did. I spent part of the day looking for a copy of Jason and the Argonauts to no avail. So I went to the bullpen and childhood favorite Clash of the Titans.

Watching this as an adult is an interesting experience. This is a film in its 30s, and as a special effect film, it doesn’t hold up as well as my memory of it. The double exposure shots are blatantly obvious and kind of sad in our world of CG and camera trickery, but back in 1981, boy, this stuff was high-tech. But Harryhausen wasn’t known for that—with him it was all of the wonderful stop motion work and monsters and creatures that couldn’t be brought to a film audience any other way.

Clash of the Titans is a reworking of the story of Perseus with liberal poetic license from the original myth. I was a Greek myth junkie as a kid, and I knew then that there were significant changes from the story. Hermes figures in the original myth prominently and he’s nowhere to be found in the film. One of the gifts Perseus receives in the story are winged sandals—Pegasus accompanied Bellerophon in the stories. But so what? For a 13-year-old kid, this stuff was magical, and it gets the main chunks of the story right enough.

Perseus (Harry Hamlin) is sent a-questing by Thetis (Maggie Smith). Why? Revenge. Perseus is the son of Zeus (Laurence Olivier) and is thus favored by him while Thetis’s son Calibos (Neil McCarthy) is punished. This punishment includes terrible disfigurement, which prevents his marriage to Andromeda (Judi Bowker). Just to prove a point about her son getting a raw deal, Thetis puts Perseus into her patron city of Joppa. Calibos has brought a curse down on Joppa—now, every potential suitor for Andromeda must answer a riddle or be burned at the stake. Through the power of divine gifts granted at the whim of Zeus, Perseus is able to learn the secret of the riddle and thus win Andromeda’s hand in marriage.

Ah, but that would be too easy. The pride of Andromeda’s mother Cassiopeia (Sian Phillips) brings down the wrath of Thetis. By Thetis’s command, Andromeda must be sacrificed as a virgin (so much for the wedding night) to one of the last remaining Titans: the Kraken. Perseus now has 30 days to discover a way to kill the Kraken and release his bride from being eaten by a giant sea critter. Helping him along the way is the playwright Ammon (Burgess Meredith) and a host of redshirts.

Harryhausen’s contribution to Clash of the Titans, beyond co-producing, that is, is the host of mythical creatures—Calibos and Pegasus in long shots, a giant vulture, a two-headed dog, giant scorpions, Medusa, the Kraken, and probably a few others that I’m forgetting. It’s obvious when we switch to stop motion work, but it doesn’t matter, because it’s still really cool. And it still really works. I watched this tonight with my 10-year-old daughter, and she was completely into it the whole time. In fact, when Perseus and his remaining redshirts reach Medusa’s cave, she crawled up next to me and grabbed onto my hand for support.

More than anything, that made me happy. It made me happy to know that even if I’m a jaded bastard of a film watcher, this thing still has the magic to get a kid worked up and into the story and to have her legitimately frightened for the hero in a tense scene. It was fun to get her reaction to the moments of decapitation and goopy blood and such. It’s difficult to turn off my critical eye on such things, so seeing them through her eyes was very much like seeing it for the first time.

That’s why Ray Harryhausen needs to be remembered. It was his painstaking frame-by-frame work that made films like this magical for the kid I was and the kid my younger daughter is now. There’s a genuine power in that sort of magic, and obvious stop motion or not, it’s a magic that is very real and still very much alive in his films.

I still think that Jason and the Argonauts is the quintessential Harryhausen, but on a night like tonight, I’ll take what I can get and be happy with it. Here’s to you, Ray; may the joy you brought me and countless others never fade away.

Why to watch Clash of the Titans (1981): Because it’s Ray Goddam Harryhausen.
Why not to watch: You’re a terrible, joyless person.

Email ThisBlogThis!Share to TwitterShare to FacebookShare to Pinterest
Labels: Clash of the Titans, Desmond Davis, fantasy