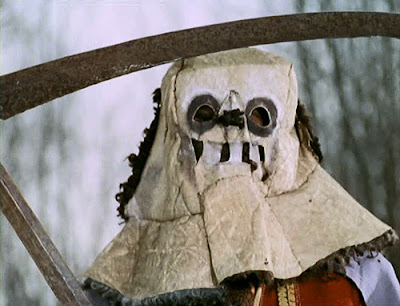 I remember my first foray into the work of Sergei Parajanov. I’d love to say I remember it fondly, but that would be a lie. In fact, that was such a weird experience that it’s taken me this long to get to his second film on the list, Tini Zabutkyh Predkiv (Shadows of Forgotten Ancestors). The good news for those of us not well-versed in the tradition of Armenian surrealism is that unlike Sayat Nova, Tini Zabutkyh Predkiv is more than just a collection of surreal images and unexplained nonsense. There’s an actual story here that can be followed.

What’s important here is not what I have said, but what I haven’t said. Yes, there is a narrative here, but that doesn’t mean that this film is easy to understand. Yes, it’s far more coherent than Sayat Nova, but that doesn’t make it coherent. And none of this means that I got anything out of watching it. No, there’s a part of me that certainly wishes I had knocked this one out a year ago if only so I didn’t spend part of today watching it.

So let’s get the basic plot out of the way quickly, because it won’t take long. In the Carpathians, a young man named Ivan (Ivan Mykolaichuk) falls desperately in love with the daughter of the man who slew his father. This girl is Marichka (Larisa Kadochnikova). The two of them belong to feuding families, much like the Montagues and Capulets (or the Hatfields and McCoys, should you prefer a more similar backwoodsy reference), which makes their romance difficult. However, both Ivan and Marichka are dedicated to the idea of being together forever one day. Knowing that their marriage will be difficult, Ivan leaves town to make money to build their house. While he is gone, Marichka drowns while saving a wandering lamb.

So, when Ivan returns (and he evidently returns on the day she drowns), there is much gnashing of teeth and sorrow. Ivan becomes a recluse, but eventually snaps out of it when he meets Palagna (Tatyana Bestayeva). But the marriage is an unhappy one because Ivan can not let go of his memories of Marichka. His physical coldness forces Palagna into the arms of a local wizard who might curse or bless Ivan, depending on one’s point of view. In either event, the film winds down to an inevitable conclusion and we all shake our heads at the awesome power of fate.

Or not. Parajanov’s work is highly symbolic, and Tini Zabutykh Predkiv no less than any other. This is a film that strays far from reality, giving sorcerous powers to Palagna and bizarre visions of his lost love to Ivan. I can’t quite call it magical realism, but there’s something beyond the real world here. What there isn’t, is a reason for me to care that much about what is going on. I couldn’t help thinking as I watched this that I’d seen the same thing just a couple of days ago when I watched Conte d’Hiver. The difference is that in Conte D’Hiver there was nothing supernatural going on and that I cared even less about the people involved, since their separation from lost loves was entirely their own doing.

I won’t deny that there’s a great deal of beauty in Tini Zabutykh Predkiv, but I’m not sure what the beauty of the cinematography is in service of. Again, as with Sayat Nova, I feel like I’m missing a lot because I don’t know the legends or the people on which this film is based. I don’t know if this is a traditional story (I suspect it is not) or something created to take place in a certain time and place.

It’s worth noting that Parajanov was dedicated to his vision. This film was created in a time of realism in Soviet cinema, and Tini Zabutykh Predkiv went against everything Soviet cinema stood for at the time, It wasn’t long after the release of this film that Parajanov was essentially blackballed, creating a 12-year gap in his filmography (although in the interests of full disclosure, he did make Sayat Nova before being kicked out of the club).

I think it’s safe to say that I got more from this than I did from Sayat Nova, but that doesn’t say much. I didn’t get anything but confused from Parajanov’s follow-up to this film. I understand the appeal of this and can even understand why many people find this film one of the essentials. I’m not one of those people, though. Once is enough, and I doubt I’ll remember much if you ask me about this in a couple of months.

Why to watch Tini Zabutykh Predkiv: It makes more sense than Parajanov’s other work
Why not to watch: It doesn’t make that much sense.