Self-Sabotage as an Art Form 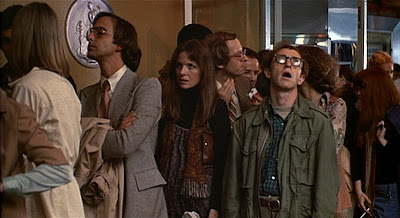 I don’t think there’s a great deal of middle ground on Woody Allen in general. If you like him, you like him a lot and even his weaker films have something worth seeing. If you don’t like him, you really don’t like him in general, although a few of his films might do it for you. I consider myself a fan, not an obsessive one by any stretch of the term, but a fan nonetheless. I tend to like what he puts out. I like his writing a great deal, and I’ve read a couple of his books—Getting Even, Without Feathers, and Side Effects--multiple times. Knowing this, it’s very much embarrassing to admit that until today, I’d never seen Annie Hall.

Yeah, I know. Get your scorn out now. I was so embarrassed by this, in fact, that on the site where I list the full range of films on The List that I marked it as previously-seen just so I didn’t have to hear other people yelling at me for not having watched Annie Hall yet. Why? Well, assuming you’re one of the apparent 95% of humanity that has seen Annie Hall, you likely already know why it’s considered an essential. If you haven’t seen it, well, you really should, even if you end up not liking it (ahem…Chip, I’m looking at you here).

Like the bulk of Allen’s classic work, Annie Hall is as Woody Allen as he ever gets. It’s funny and weird and more philosophical than most comedy. Allen makes references to just about everything, and it’s easy to get lost in his dialogue because of it. But at the same time, he’s not above turning a philosophical discussion into a dick joke. This is a unique talent, and one I appreciate.

Like a good romantic comedy, there’s not a ton of plot here because the plot is entirely about the relationship in question. We learn from the outset that our male lead, Alvy Singer (Woody Allen) has been a year without Annie Hall (Diane Keaton). He’s still trying to make sense of the relationship and the loss of the relationship. It’s this story that then takes up the bulk of the film.

Our couple meets on a tennis court and have their ups and downs. During their relationship, Alvy examines his two failed marriages. The first, to Allison (Carol Kane), tanked because Alvy tanked it. The second, to Robin (Janet Margolin) ended because the sex was bad. At the same time, he investigates Annie’s past relationships, not understanding what she saw in the men she was with. Eventually, the pair breaks up, comes back together, and breaks up again, following the pattern of many a real-life relationship (and it’s appreciated that it’s merely on-again/off-again without repeating the cycle indefinitely). And through it all, Alvy analyzes and tries to figure out what went wrong, where it went wrong, and who was responsible for making it go wrong.

It’s a simple film, so the devil here lies in the details. There are great moments of Alvy looking back into his past, reliving events as a child as an adult now. We see the relationship of his parents as it happened, but through his adult eyes, with Annie and his friend Rob (Tony Roberts) watching. He defends his past actions with the hindsight, clouded memory, and defensivenessof an adult, justifying everything he thinks he thought and felt, trying to square those memories with his present understanding.

The classic Allen character is a neurotic mess who is inexplicably successful in a creative career, and Alvy Singer is no different. He embodies all of the neuroses of Allen at his most Woody Allen while being a successful enough comedian to have appeared on network television shows. But it’s not enough because it’s never enough. It all comes hurtling back to his own insecurities, his own inadequacies, and his own disappointment with everyone else. Annie will never be perfect enough for him, never smart enough or sexual enough, or anything enough to make him happy.

Beyond this, there are great moments throughout—the moment in the movie line where Allen as the director is able to pull Marshall McLuhan out of nowhere to back up his own point of view, the lobster boil, the “spider the size of a Buick” in the bathroom. Admittedly, Allen tends to write dialogue that’s far better than people actually talk, but that’s part of what makes it great. There’s a quip or a one-liner for every possible situation. Sure, that’s not reality, but it’s certainly part of the charm here.

I get it. I understand why Annie Hall is considered a must-see film, and why of all of Allen’s films it is generally considered at or near the top of the heap. Radio Days remains my favorite of his scripts; it’s filled with the same sort of humor but is also filled with a rose-colored nostalgia that I find infectious. Annie Hall is funnier, though. It’s more barbed and more pointed, and much more of that is pointed back at Allen himself. And that’s really what makes it work. It’s cruel in a way good comedy is cruel, but that cruelty is self-inflicted, which somehow makes it all right.

Why to watch Annie Hall: Woody Allen’s writing at its best.
Why not to watch: I’ve got nothing.

Posted by SJHoneywell at 7:14 PM