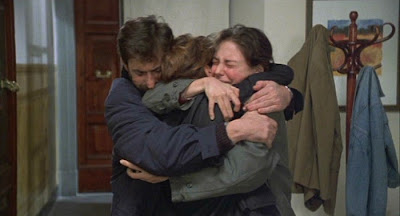 Nanni Moretti seems like a really nice guy. He seems like someone it would be fun to hang out with or live next door to. I always get that impression from him, and got it just as strongly while watching La Stanza del Figlio (The Son’s Room). This is a film that plays like an Italian version of Ordinary People, and yet in many ways, it is more emotionally satisfying rather than shattering.

Giovanni Sermonti (director and co-writer Nanni Moretti) is a successful therapist who spends his days listening to the banalities of his patients’ lives. While some have more interesting problems than others, he is not the sort of therapist who treats non-functional schizophrenics or psychotics. No, he deals with people who have strange compulsions or obsessive thoughts, and while some may be prurient or interesting, they’re mostly pretty typical. He is an active father and husband and spends a lot of time with his wife Paola (Laura Morante), son Andrea (Giuseppe Sanfelice) and daughter Irene (Jasmine Trinca). And this is the first third of the film, a pleasant look at this fairly normal family.

One Sunday, the family plans an outing, but one of Giovanni’s patients intervenes. Oscar (Silvio Orlando) has been recently diagnosed with cancer and his understandably having a very difficult time dealing with it. Panicked, he calls the doctor and demands an appointment. Giovanni tries to play him off, but relents and goes to comfort his patient. Andrea goes out diving with friends.

And this is where the film turns. While scuba diving, Andrea evidently gets lost in an undersea cave, runs out of air, and drowns. It is sudden, tragic, and awful, and no one is around to find out until Giovanni returns home and is forced to tell his wife and daughter of Andrea’s death.

The rest of the film concerns the family attempting to cope as best they can with the sudden terrible hole in the middle of their lives and family. Paola withdraws; Irene becomes angry and violent, starting a fight during a basketball game. Giovanni spends his time running over the fateful day in his head, blaming himself for treating his patient and blaming the patient for calling him away from his family. And then out of the blue, a letter for Andrea arrives from a girl named Arianna (Sofia Vigliar). It seems that Andrea may have had a secret girlfriend that no one in the family knew about, and this news affects each member of the family in a different way.

I’m not trying to suggest anything when I say that in many ways this film is more emotionally satisfying than Ordinary People. The main reason for this is that in that film, we never really meet the son who drowns—he’s mostly a memory and we deal instead with the aftermath quite some time after his death. Here, we not only know Andrea, but we experience his death exactly as the family does—as something that happens when we are paying attention to other things.

It’s very effective. What is more, the characters are completely believable because they react in perfectly understandable and believable ways. The reactions to their personal tragedy are completely human and gutting because of it. Watching Giovanni soldier on with his patients talking about death and then seeing him break down suddenly and without warning when another patient mentions being childless hits to the heart of the humanity of the story and the realness of these people on screen.

Better, La Stanza del Figlio doesn’t wind up with a resolution that tells us everything. We get to a certain place and we get a certain amount of closure, or at least some reassurance that these three will go on and will somehow find their way through their pain, but we don’t go all the way there with them. We simply get to a particular place and are forced to leave them.

This isn’t a happy film, not with the death of a teenager who didn’t deserve it or the pain of a family that didn’t, either. It does reach a solid point of catharsis, though, and that’s very much in its favor. As a parent, it’s the sort of film I find very difficult to watch because it’s the sort of life experience I very much don’t want to have. At the same time, as a film viewer, it’s the kind of film I want to see more of because it touches on something very real in the human condition and does so beautifully. Nanni Moretti has been called “the Italian Woody Allen,” and with films like this, the comparison is a fine one.

Why to watch La Stanza del Figlio: Real human tragedy.
Why not to watch: If you’re a parent, it’s a tough watch.