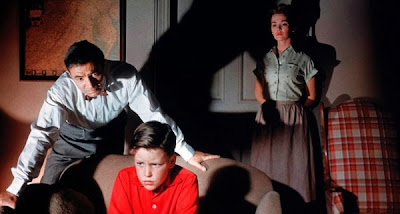 Medical dramas are sort of their own thing. They’re popular enough on television and have been for some time, but they don’t always do so well on the big screen. Bigger than Life is absolutely a medical drama, and it’s one that seems very much ahead of its time. According to the back of the DVD case, this film was virtually ignored upon release, and I get that. It might simply have been too raw for Eisenhower’s America.

Ed Avery (James Mason) is a grade school teacher who moonlights for a taxi company to make additional money. He’s also suddenly started having attacks of intense pain, sometimes so violent that he blacks out. When this becomes evident to his wife Lou (Barbara Rush), Ed gets rushed to the hospital. He is diagnosed with a rare condition called polyarteritis nodosa, an inflammation of the arteries. It’s a condition that is generally fatal within a year. However, the doctors want to try a new treatment—a wonder drug called cortisone.

At first, the change is dramatic. Ed is almost immediately cured and becomes a new man. He goes back to work and everything seems fine. He is warned, though, that the cortisone needs to be taken carefully—one pill ever six hours—but he immediately begins abusing the medication, taking more than prescribed because of the positive effects it seems to have on his mental outlook.

And then everything starts going off the rails. At his parent/teacher meetings, he begins speaking to the parents as if their children are mindlessly stupid, going off on a massive rant about the quality of their education and what he thinks should be done about it. At home, he is initially filled with manic energy, which soon shifts into egomania, irritation with everything, and eventually something not unlike psychosis. A part of his mania is the attention being paid to the family by his bachelor friend and fellow teacher Wally Gibbs (Walter Matthau). While Wally’s concerns are specifically for Ed’s health, particularly as his mania increases, Ed is convinced that Wally wants him out of the way to move in on Lou.

All of this is great to watch, but it’s all in service of the third act in which Ed’s megalomania really asserts itself. It starts off in little ways, with Ed spending money frivolously on his wife and son Richie (Christopher Olsen). When Ed decides to take on Richie’s education and begins treating him cruelly, Lou convinces the boy that it’s the medication talking. Richie eventually tries to steal the pills and is caught doing so, which leads to one of the truly great film climaxes it has ever been my joy to have observed. It’s the kind of emotional high point that I would expect in a modern film rather than one rapidly approaching 60 years old.

James Mason has always been one of my favorite classic actors. Part of that is his singular voice, but that’s hardly the only reason he was a great actor. He made a great villain. In Bigger than Life he might well be at his most villainous and yet he’s also entirely sympathetic. The ending might well play out a bit like melodrama, but it doesn’t matter, because the final 20 minutes of this film are among the most tension-filled minutes I have seen in a very long time. Even better, everything that happens feels like homage to Samuel Fuller.

I’ve never been shy about touting North by Northwest as my favorite film, and of course Mason plays the bad guy in that as well as he’s ever played anything. I might now have to amend what I think is his finest performance, though, because in Bigger than Life, he is absolutely riveting. It seems like a shame that Mason was passed over for an Oscar nomination.

In fact, Mason’s performance in this is so good, it’s easy to overlook just how effective Barbara Rush is. For all of the fact that Lou Avery is a fairly typical 1950s housewife, this is a truly feminist role. She is an absolute pillar of strength for her family, someone willing to do anything for the sake of her family. While Ed is the main character here, Lou is absolutely the person we are rooting for from start to finish.

There are moments of brilliance here from Ray as well. Angered with her husband treating her like a servant, Lou slams a bathroom medicine cabinet in a fit of pique. Later, Ed looks at himself in the shattered mirror, an absolute metaphor for what is to come. Staging the final conflict to the sounds of carnival music blasting from the television is genius as well.

I don’t often say things like this, but Bigger than Life has earned it: I’m even okay with it turning a bit sappy at the denouement. After the wringer it puts us through leading up to it, it’s earned a little tug on the heartstrings. And the best part? The psychotic breakdown that Ed goes through is completely legitimate—it’s a potential serious side effect of cortisone. 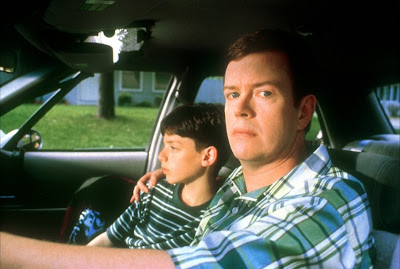 The film concerns the Jordan family—mother, father, and three adult daughters, each terribly messed up in their own specific ways. Lenny and Mona (Ben Gazzara and Louise Lasser) have been married for 40 years, and suddenly Lenny wants out. He’s not particularly interested in another woman; he just wants out. He’s become emotionally numb, and even a casual fling with a neighbor doesn’t do anything for him.

Trish Maplewood (Cynthia Stevenson) is the oldest of the daughters and lives what she thinks is the perfect life of a housewife with three kids and a successful husband. Little does she know that her husband Bill (Dylan Baker) is a closet pederast, who has developed an unhealthy obsession with one of his son’s friends. When the friend, whose father thinks is gay, sleeps over one night, Bill drugs everyone, giving him a chance to abuse the boy. He repeats this with another boy in the neighborhood and is eventually caught. His older son, Billy (Rufus Read) seems almost offended that his father wouldn’t molest him as well.

Middle daughter Helen (Lara Flynn Boyle, while she was still in the process of transforming into a stick figure) is a successful novelist, but is convinced that she doesn’t deserve any of her acclaim. All of her relationships are shallow, so she develops her own interest in a man who makes obscene phone calls to her apartment. Helen turns out to be disappointed when the caller proves to be her neighbor Allen (Philip Seymour Hoffman), who she finds unattractive. Allen, in the meantime, is pursued by Kristina (Camryn Manheim), another neighbor capable of her own version of unhealthy obsession.

Finally, there is youngest daughter Joy (Jane Adams). Joy is very much the baby of the family, the one who everyone believes needs to be constantly sheltered from the world. She struggles with her music career, and is called shallow by a sort of boyfriend, Andy (Jon Lovitz), who accuses her of emotional shallowness when she dumps him. Andy eventually goes on to kill himself. For her part, Joy tries to turn her life around by teaching, eventually hooking up with one of her students, who responds by stealing her guitar.

So yeah, this is not a pleasant film. It’s a difficult watch because so much of it is so painfully unpleasant, as a matter of fact. Don’t take this to mean that it isn’t worth watching, though, because it is. It’s simply the kind of thing that makes you want to take a shower when it’s done. There are conversations in this film, like Billy essentially asking his pederast father what it’s like to ejaculate that give me ugly feelings down my spine. It’s painful stuff. In fact, almost every conversation that isn’t crippling in its embarrassment is brutal in its cruelty.

Happiness pulls no punches, either. In the first 20 minutes, Andy dresses down Joy, Allen confesses to violent sexual fantasies about his neighbor, Trish tells Joy that the entire family believed she was destined to life as a loser and failure, and Bill fantasizes about killing people with a high-powered weapon and masturbates in the back seat of his car over the equivalent of a Teen Beat magazine.

So really, if the first 20 minutes don’t turn you off, at least you’re prepared for what’s to come.

There’s certainly comedy here, but it’s comedy of the blackest sort. It’s not the kind of comedy you laugh at, but the kind that you feel guilty for even seeing in the situations. But that’s also the genius of the film. Everyone in this film is significantly broken, broken in terrible, brutal ways. But everyone also tries their hardest to maintain a veneer of normality and respectability. It’s almost like David Lynch tried to make a comedy.

Did I like Happiness? I’m not sure. It’s ugly and awful, but it’s also beautiful and brilliant. That’s the best I can do.

Why to watch Bigger than Life: Because it’s James Mason, and he’s goddam awesome.
Why not to watch: It’s scarier than you’d guess.