Hell in a Handcart

When I watch a film like Jean-Luc Godard’s Pierrot le Fou (Pierrot Goes Wild), I seriously wonder what the hell I’m doing with these reviews. One of the main reasons I undertook the full list is because when I first encountered it, I had seen far fewer than 30% of the films listed, and had heard of only about half. I like to think I’ve come a long way as a film viewer, as someone who can watch and make sense of what he sees on the screen. And then I get Pierrot le Fou, which may well be packed with all sorts of meaning and importance, and I’m left scratching my head. I understand what happens in the story, but I don’t understand what it’s about.

Ferdinand (Jean-Paul Belmondo) is in a loveless marriage to his unnamed wife (Graziella Galvani). Against his wishes, they attend a party, leaving their children to be supervised by the alleged niece of a friend. This is Marianne (Anna Karina), actually the lover of the friend and a former lover of Ferdinand. The party proves to be less than banal; the people there speak literally in advertising slogans, so Ferdinand leaves. He arrives home and gives Marianne a ride home, but ends up staying with her.

And suddenly the two have decided to run away together since both are bored with their lives. Marianne claims to have a brother who is a gun runner. Their departure starts something like a minor crime spree. They steal a car, and evidently there’s money in the trunk that belongs to someone else, but they eventually decide to burn the car and the money, which they do at the scene of a car accident complete with mannequin-like corpses. And they go live on the beach for some time. Ferdinand reads books while Marianne gets bored. Eventually, the guy who the money belonged to comes looking for it. The pair are separated, find each other again, and we learn that, for lack of a better way to put it, Marianne is actually the femme fatale of a traditional noir. And, and, and, I don’t know.

There are parts here where I’m pretty sure I know exactly what Godard is trying to say. The party of advertising slogans is unquestionably a comment on the superficiality and commercial nature of society. Sure, I get that. I get that there are moments here that presage some of Godard’s later work. The comments about the fictional man in the moon trying to get away because the Russians forced communism on him while the Americans forced Coca-Cola down his throat look ahead to similar statements in Masculin-Feminin, for instance. But how does any of this connect to the crazy woman who claims to be a princess who sometimes flies her husband’s “space machine”? What the hell does it mean when Marianne paints her face yellow and pretends to be Vietnamese? Why the holy hell does she insist on calling Ferdinand “Pierrot” for the entire film? Why the hell does she kill a guy in her apartment with a wine bottle? Why do Ferdinand and Marianne break the fourth wall and narrate in tandem?

A film like this one leaves me in the same sort of position I am in with man of the films of Luis Bunuel. I don’t know if I’m supposed to consider what is happening serious and meaningful and full of philosophical import or if I’m supposed to think that it’s a bunch of silly nonsense and laugh at it like it’s a Monty Python film. I think there’s supposed to be some meaning here in what happens, but I’m entirely comfortable with the notion that Godard is pointing and laughing at anyone who tries to make it meaningful. Either one is entirely possible. I think there’s meaning, but I can’t ferret it out.

It feels like a very large question mark of philosophy in search of a meaning. Or at least it didn’t answer any questions for me. Maybe I’ll watch it again some day when I feel like I might know more. 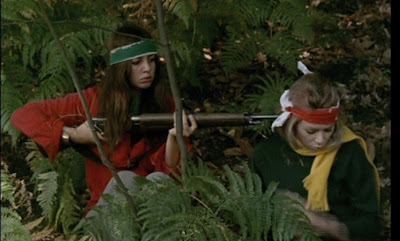 From here, we move to my final Godard film on The List: Week End. This is the Godard of a few years after Pierrot le Fou, when he evidently flat-out decided to give up on coherence and decided instead just to hurt his audience as much as he possibly could. Week End documents the complete breakdown of French society, forcing us into a world of chaos and anarchy, crime, murder, and eventually cannibalism. For as difficult as this film is and for as numbing as parts of it can be, I feel like I got much more out of it than I did Pierrot le Fou. While it’s a challenging film, it’s far less obscure in its intent.

Corrine (Mireille Darc) and Roland Durand (Jean Yanne) are a very unhappily married couple. Both are in the middle of an affair, and both would like to kill off the other. However, Corrine is due to inherit a great sum of cash from her sick father. Both, then, are content to wait for the inheritance before they kill each other. In fact, they’ve been spiking his food for years, hoping to finally get rid of him.

Everything we see as Corrine and Roland head off for a week end with her rich parents demonstrates that French society is breaking down and falling into chaos and complete disorder. We see a fight break out between people over a minor traffic accident. They encounter a massive traffic jam (complete with blaring horns for what seems like an hour). Throughout their trip, they encounter a variety of fatal accidents that no one seems to be doing anything about. Bodies and smashed cars lie everywhere. They’re eventually carjacked near another accident. The man calls himself Joseph Balsamo (Daniel Pommereulle) and also claims to be God until they kick him out of their car in the middle of a herd of sheep. Yeah, I don’t get it either, and this is just the first half hour.

Look, I’m not going to kid you. For the first third of the film or so, it’s almost impossible to hear anything because of the car horns. Eventually, Corrine and Roland crash, and while cars and people burn, Corrine mourns the loss of her designer handbag. From this point, the pair walk, encountering a number of people in various states of panic and insanity, furthering the complete mental, emotional, spiritual, and cultural breakdown of France.

Everywhere in the film, every conflict becomes immediately violent and murderous, and the further we get into the film, the more terrible and more violent the car accidents become. Corrine and Roland simply walk past burning cars and bodies lying in their own blood as if it is the most natural thing in the world. Why? Well, because in this film it is.

Week End contains the sort of playing with narrative and with the film medium that made Godard’s name. He splits the frame horizontally, showing the bottom half of the frame at the top of the screen and vice versa. He immediately repeats short clips of film, cuts in the middle of conversations, and does everything else he can to damage and destroy the very narrative he is trying to show. He also has the characters break the fourth wall, telling each other that they are acting in a film and dealing with imaginary characters—and in fact are imaginary characters themselves. This comes as little comfort when they decide to immolate a young woman who refuses to help them find the way to where they are going.

It’s also surprisingly sexual in places. Early in the film, Corrine graphically describes a sexual encounter with a friend and her husband that avoids being pornographic only by virtue of her being partially clothed and us only hearing it in description. While not particularly shocking for 2013, I can’t imagine that it was anything short of purely scandalous when the film was released in 1967.

There’s no nice way to say what I need to say about Week End. This film is solidly fucked up. I felt the entire time as if I was watching something that wanted to be a snuff film and that they only reason Godard wasn’t actually killing people off and littering the road with them was because doing so would be illegal. Or, more likely, because doing so would come with severe punishment.

And this doesn’t even cover the hippie cannibals or the final fate of Corrine’s parents. It also doesn’t mention the filmed slaughter of animals near the end. Those who object to watching a pig get bludgeoned and then have its throat cut are duly warned.

Ultimately, Week End is not a film to be explained, but must instead be witnessed. It certainly seems to be Godard at his most contemptuous of society and materialism, but this is not a film to watch lightly. It is gruesome and ugly and thoroughly unpleasant, even when nothing particularly unpleasant is happening on the screen. It’s not one I plan on watching again any time soon.

Why to watch Pierrot le Fou: Godard junkies think you should.
Why not to watch: It’s opaque.

Why to watch Week End: Godard at the start of his really rebellious phase.
Why not to watch: It’s flat out nasty.