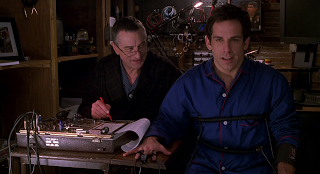 I’m not going to pull a punch here—I dreaded Meet the Parents for a number of reasons. First, I’m not a huge fan of Ben Stiller. I like him sometimes, but I rarely like him as a featured actor (Zoolander being a notable exception). He grates on me. Second, I have a real problem with what I call “embarrassment comedy,” defined as a comedy where all of the humor comes specifically from someone being horribly embarrassed. Third, just from reputation, I knew a couple of the main jokes going in—Stiller’s character name isn’t Greg, but Gaylord Focker (har har) and it’s a point of comedy that he’s a male nurse.

So yeah, that’s what we’re headed into. Misandry and gay puns. Joy.

So it’s a pretty straightforward premise for a plot. Gaylord “Greg” Focker (Stiller) has been dating Pam Byrnes (Teri Polo) for about ten months and now lives with her. As the film starts, he attempts to propose to her, using the kids she teaches to help (it’s actually kind of cute), but is interrupted when she gets a phone call from her sister. Said sister has just been proposed to by her doctor boyfriend of a few weeks or months. More importantly, the doctor boyfriend went through the important step of asking the father for permission first. This means we’re all going to the wedding and Greg will need to make a suitable impression and pop the question himself.

If you haven’t seen this, you can see where it’s going, can’t you? Greg’s suitcase is too big to carry on. Think it’ll get lost? Think the engagement ring is inside? And anything that can go wrong to give an unfavorable impression on the parents (played by Blythe Danner and Robert De Niro) does. Greg loses the treasured family cat, breaks his sister-in-law-to-be’s nose, and generally makes an ass out of himself in an effort to impress the humorless dad. Oh, and dad used to work counter-intelligence for the CIA.

The issue I have here isn’t that the film isn’t funny. There are genuinely good moments here. The sudden and impromptu lie detector—not a surprise since it’s one of the more famous scenes from the film—is funny and played very well. When he’s allowed to play on his persona, De Niro has the ability to be really funny; he’s a natural straight man, and can even deliver a punch line like a pro. No, the issue here is flatly this: I saw all the jokes coming.

Okay, maybe I didn’t see all of the nuanced little bits of everything or predict every line that would be spoken, but I definitely saw the jokes coming here. It’s obvious that the film is set up in a way to make Greg the butt of every joke who is both a schlemiel and a schlimazel (look ‘em up). And have we really not gotten beyond the point where a male nurse is funny? Sure, I realize that I can look at this as being an indictment on the Byrnes family for making fun of Greg for his occupation, but I don’t think it’s a stretch to suggest that we’re supposed to find this stuff funny, too. I’m also reminded of one of Roger Ebert’s old maxims—the only people who could get away with having a funny character name were Groucho Marx and W.C. Fields.

But my biggest issue is that all of the jokes come from a mile off. You’d have to be blind to not see them popping up on the radar. And that’s a shame because in the films where Stiller is good and worth watching, one of the reasons he’s worth watching is because the scripst aren’t so predictable. I’d throw out the aforementioned Zoolander as one example, as well as his turn as a comedically-stupid heavy in Dodgeball. Both of those films gave him a lot more to do, and despite his playing a mental midget in both, treated his characters with more respect. Hell, I even prefer Mystery Men.

So, bottom line, Meet the Parents is a tried-and-true premise that would have been a lot better if it had done more that wasn’t so obvious with it. There’s potential here and moments of fun, but it could have and should have been more than it is.

Why to watch Meet the Parents: It’s actually funny in places.
Why not to watch: The jokes are telegraphed.

Posted by SJHoneywell at 7:25 PM