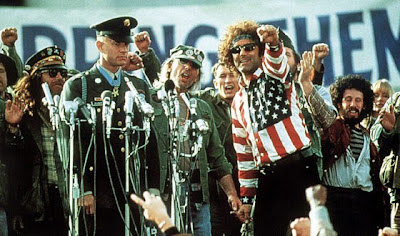 I really don’t like Forrest Gump at all. I don’t like the story, I don’t like the characters, I don’t like the premise. There’s only one character I like at all, and he gets killed. Where most people see a story of hope and a triumph of the human spirit, I see only the story of a guy who gets abused at virtually every turn of his life and is too stupid to realize any of it. Forrest Gump makes me angry, which is precisely why it’s taken me this long to get back to it. I didn’t like it the first time I saw it, didn’t like it the second time, and I didn’t like it today. As a matter of fact, I’d forgotten just how intensely I disliked this film, and I hated it more than I thought I would this time through.

A lot of people see wisdom in Forrest Gump. The most famous (and frequently misquoted) line is “My mama always said, ‘Life was like a box of chocolates. You never know what you’re gonna get.’” Twenty years ago, that was a cultural touchstone, a modern American Zen koan that people used as inspiration. In reality, I always know what I’m going to get from a box of chocolates. That’s because I’m capable of reading the little chocolate road map under the lid. This isn’t wisdom; it’s illiteracy.

Forrest Gump is the story of a man of the same name (Tom Hanks) who evidently likes to sit at bus stops and relate his life story to complete strangers. Here’s a tip for you—if a guy with a bad haircut and a “boxxachoklits” starts narrating his life story to you through a mouthful of sweets, leave. Anyway, over the course of the film, we learn all about the extraordinary events of Forrest’s life. We learn that he taught Elvis Presley how to dance, was an All-American football player in college, which he got in because of his running talent and despite his borderline-retarded IQ, got the Medal of Honor in Vietnam, survived a hurricane and became a successful businessman, met three presidents, started the jogging craze, helped break the Watergate story, and more. Throughout all of this, it is apparent that Forrest never really understands anything that is going on around him. Ever.

So let’s talk about the other characters, since Forrest himself is pretty much covered by the previous paragraph. We can start with Jenny (Robin Wright). Jenny is the girl that Forrest spends the entire film in love with, mostly unrequited. It’s evident early on that Jenny is sexually abused by her father. She leaves Alabama as soon as she can and spends most of the film doing exactly what she wants regardless of anything else. She also manages to hook up with a bunch of guys who treat her exactly as her father did, gets involved in drug culture, spends some time as an erotic performer, and eventually dies of AIDS. In a sense, she’s the anti-Forrest. She gets caught up in a lot of the events of the time as well, but never in a positive way. Oh, and one night she takes advantage of Forrest and gets pregnant with his child (eventually played by a very young Haley Joel Osment).

So let’s talk about that for a second. After a lifetime of basically screwing up her life, she returns to Forrest, who takes care of her as best he can. One night, she sneaks into his room and has sex with him, and then vanishes, basically treating him as she always has—as something convenient for her when she needs it, and leaves when she wants to. As for the thankfully brief sex scene...this is supposed to be a sweet scene, something charming. But switch the roles here. Would it be sweet if a guy essentially raped a girl with a borderline-retarded IQ? No—we’d all look at it as rape. I can’t look at it any other way—she basically rapes him and then skedaddles until she gets in trouble again and comes crawling back.

Now let’s talk about Lieutenant Dan (Gary Sinise). Lieutenant Dan, which is exactly how Forrest refers to him constantly, is Forrest’s commanding officer in Vietnam, and he believes that his destiny to die on the field of battle, like one of his ancestors in every previous American war. He doesn’t of course—Forrest manages to save him—but Dan loses both his legs and becomes a very angry man, blaming Forrest for all his problems. I’ll amend an earlier statement. I don’t really like Lieutenant Dan as a character, but Gary Sinise is hardcore. This is the role that put him on the national stage, and he plays it for everything he’s worth.

And then there’s Bubba (Mykelti Williamson), Forrest’s best friend in the Army. All Bubba talks about is shrimp and the shrimp business. He and Forrest plan to go into business together after the war, but Bubba catches a bullet and Forrest can’t save him. Bubba is by far my favorite character in the film and he’s only in it for about half an hour.

Eh, whatever. The whole damn thing is sappy and it makes me mad.

There are parts of this film I absolutely cannot fault. It’s beautifully produced. It was also groundbreaking in its use of technology, putting Tom Hanks into archival footage. While this isn’t that impressive by today’s standards (remember, this film is nearly 20 years old), especially when the dubbing of these characters doesn’t at all match their mouth movements, it’s still pretty cool. The war scenes are excellent as well.

I can’t fault the film for its production quality, but I can for how manipulative and glurgy it is. I’ve really given this film a fair shake, having seen it when it was new, again a number of years later, and again tonight. And I hate it now more than I ever did. I’m done with it. Anyway, Weird Al Yankovic's version of the story is better.

Why to watch Forrest Gump: Many people find it both great and inspiring.
Why not to watch: It’s actually maudlin crap.