Watching Oscar: A Man for All Seasons

Film: A Man for All Seasons
Format: DVD from Rockford Public Library on rockin’ flatscreen. 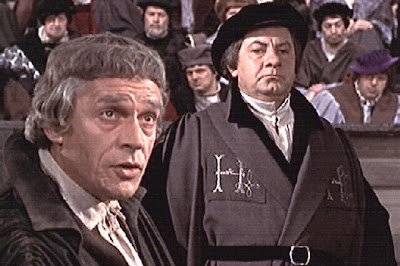 Historical dramas are an interesting genre because there’s always the potential that the audience already knows the outcome. It’s a problem I experience with some films when I know the history going in. I didn’t know a lot about the story of Thomas More, but I knew how it ended. In that sense I was essentially waiting for that particular climactic moment. Fortunately, for A Man for All Seasons, the devil is truly in the details. How we get from More’s opening position to his endgame is what is truly interesting, and it’s all in the telling.

To understand the context, we need to start somewhere other than with the main characters. King Henry VIII (Robert Shaw) wants a divorce, which is expressly forbidden by the Catholic Church. He claims that it’s because he married his brother’s widow, meaning the marriage should have never received the Pope’s blessing in the first place. The real reason is that Catherine has never given him an heir, something rather important to a king looking to extend the reign of his family beyond him. Ultimately, this schism is what led to the creation of the Church of England. It also starts the little memory game of the fates of Henry’s wives (divorced, beheaded, died, divorced, beheaded, survived).

This causes a problem for Sir Thomas More (Paul Scofield), a friend of the king and a truly devout man. He sees Catherine as the rightful queen and the marriage as legitimate. When the Lord Chancellor (Orson Welles) dies, More is named to the position, putting him in a place of real power next to the king. Naturally, this position comes with some important duties, the main one of the moment being securing Henry’s divorce from Catherine so that he can marry his mistress, Anne Boleyn. But again, More is ethically, morally, and spiritually opposed to the divorce, believing that his intense prayers can affect a miracle that allows Catherine to provide a viable heir.

Wrapped up in this political intrigue is Cromwell (Leo McKern), an ambitious member of Henry’s court and Richard Rich (John Hurt), a friend of More’s who wishes more than anything to be a member of the court. This desire extends as far as betraying More, since More refuses to assist his ambition at securing a court appointment—an ambition that Cromwell happily feeds.

The position taken by Thomas More is an interesting one—he simply refuses to speak about his opinion. He never voices it, not even to his wife (Wendy Hiller). In one of the most interesting scenes, Alice More demands that he tell her why he refuses to speak on the topic up to and including giving up his title of Lord Chancellor. He responds with a pretty point of law—if he never expresses his reasons for silence, there is no proof that he is against Henry’s remarriage, and thus he cannot be reasonably convicted of treason. His silence brings only suspicion, not proof.

It all comes to a head with the creation of an oath that all must take or be convicted of treason. The oath includes the idea that Henry is the head of the church in England, something that goes against More’s Catholic faith and he refuses the oath. This gets him locked up in the Tower of London to await trial, a trial we see at the film’s conclusion.

There are a number of interesting choices here, and they all work pretty well. One of the most surprising is the portrayal of Henry VIII by Robert Shaw. The common idea of Henry VIII is that of a scowling, fat man. Shaw plays him as young, vibrant, and vital, but also borderline psychotic. The Henry of this film takes pleasure in causing mischief and in doing exactly what he wants when he wants, essentially demanding his right as king to act in whatever manner pleases him. Welles as Lord Chancellor Wolsey has never looked in worse health; this is a man who appears to be preparing for death with his florid face and red-rimmed eyes.

Of course, the film really belongs to Paul Scofield, who brings a quiet majesty and intelligence to the role of Thomas More. From my perspective, this film is about two men fighting over who has the better imaginary friend, of course, but Scofield injects More with a sense of dignity and piety that really transfer off the screen. His More is devilishly smart and also willing to fight and die for what he believes to be right.

So is this really worth of Best Picture for 1966? I’m not so sure. It’s certainly a very good film and I appreciate that it’s one that attempts to live in a mental realm higher than most films. Importantly, while it deals with heady subjects, it remains firmly planted in something easy to follow. More’s case is a tricky legal maneuver, but it’s never confusing or difficult to follow. It’s a smart script and excellent performances that allow something this esoteric to be this easily understood by its audience. If nothing else, it’s noteworthy for raising the bar on what it concerns.

Why to watch A Man for All Seasons: The story of a man bound by duty and conscience.
Why not to watch: It’s pretty highbrow.