Huston, We Don't Have a Problem 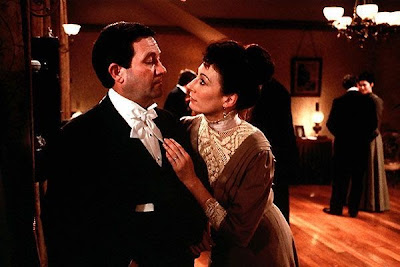 I think John Huston can be forgiven for the evident nepotism of frequently casting his daughter Anjelica Huston in many of his later films. I mean, we’re talking about Anjelica Huston here, not someone talentless and not worthy of mention. He can also be forgiven for putting her in one of the lead roles in his final film, The Dead, based on the final story in James Joyce’s Dubliners. This is one of the singularly most Irish films I have ever seen. Not only is the story one of fine Irish heritage, it is also an all-Irish cast, with the exception of Anjelica Huston herself, and she was at least partly raised in Ireland.

The bulk of the story takes place at a party in Dublin at the beginning of 1904, a party evidently there to celebrate the Epiphany, the revelation of Christ as the son of God shortly after his birth. That’s not a mistake, since the film itself is about the lower-case epiphany of one of its characters.

Don’t take this the wrong way, because I rather enjoyed my time with this film, but it’s the definition of a slow starter. The bulk of its running time is the party itself and the slow reveal of the various characters in attendance. We learn about their relationships and a little of their lives, see those relationships shuffle and change a bit, and then the party eventually ends. It almost feels like the entire point of the film is simply to watch the Epiphany party and see the lives of these people. It’s not until the final 15 minutes or so that we discover the point of the entire film.

The aforementioned party takes place at the home of two spinsters, Julia (Cathleen Delany) and Kate (Helena Carroll). Guests arrive and drink and dance. We get a little backstory on a few of the characters, like the drunk and failure-prone Freddy (Donal Donnelly), the drunk and respected Brown (Dan O’Herlihy), and the aggressively political Molly (Maria McDermottroe). But the folks we are most interested in arriving at the party are the spinsters’ nephew Gabriel Conroy (Donal McCann) and his wife Gretta (Anjelica Huston).

As the evening goes on, it becomes evident that several members of the entourage are expected to perform at some point. We get piano playing, singing, recitation, and then we get to the meal where the conversation turns to theatrical performances, opera, and those now-dead performers that the older members of the group remember from their youth. Gabriel offers a toast (one that he has obsessed with over the course of the evening), not noticing that the conversation has turned his wife rather wistful. As they prepare to leave, they hear a guest named D’Arcy (Frank Patterson) singing an old song, which causes Gretta to cry.

And all of this is the crux of the film. It takes us more than an hour to get to Gretta crying and several more minutes until Gabriel has the opportunity to ask her why that particular song made her cry. These last 10 minutes are what really make up the entire impact of The Dead. We watch the party and the interaction of the guests and set up all of these relationships specifically to get us to Gretta’s sudden emotional outburst at the end. I will not reveal it; it is the entire point of the film, after all.

With any film that works the way this does—65 minutes of set up for 15 minutes of actual drama, the real question is whether or not it works. That’s not a question I can answer for anyone but myself. For me, it worked perfecdtly. While the party scenes may seem pointless, they aren’t dull. These are interesting characters who appear to be fully three-dimensional, and while their conversation isn’t of any great importance, it’s interesting to listen to. And the payoff is a grand one. It’s the kind of moment that really does make the previous hour of the film worth it completely. It’s a real and human moment, and one easily relatable to anyone, both from Gretta’s perspective and from Gabriel’s.

What also makes The Dead really work is its simplicity. This is not a complicated film with a difficult plot that takes a great deal to understand. No, instead this is a little film in the sense of what it is about. It’s about a couple of lives coming to a particular point in their relationship and nothing more. But because it is a straight line of a plot, The Dead afford Huston and his cast the ability to plumb this simple scenario for real emotional depth, and that’s what they do. 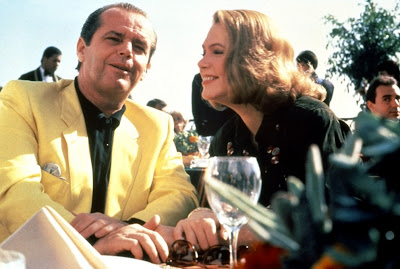 The Dead was Huston’s last film. His next to last film was Prizzi’s Honor. With the exception of the presence of Anjelica Huston, I’d be hard pressed to think of two more different films. There is a thread that connects them—it’s as much a film about relationships as The Dead is, but these are not the same kinds of relationships. Prizzi’s Honor isn’t quite sure if it wants to be a romantic comedy or a mob film, but it’s okay; this indecision makes the film work.

Charley Partanna (Jack Nicholson) works as a hitman for the Prizzi (pronounced “PREET-si”) family, a connected New York mob family with business around the country. Charley was romantically linked to Maerose Prizzi (Anjelica Huston), daughter of Dominic Prizzi (Lee Richardson). The two had a falling out, leading to Maerose being all but dropped from the family and a case of serious enmity between Dominic and Charley.

At a wedding, Charley sees a woman from across the church and is immediately entranced by her. He dances with her at the reception, but she leaves in the middle of the dance. Charley does what he can to find out who she is, so it comes as a surprise when she calls him to apologize for skipping out on their dance. It’s as big of a surprise that she is calling from Los Angeles. Moments later, Charley is taken downtown as a suspect in a mob hit. He decides to pursue the woman of his dreams, discovering that her name is Irene Walker (Kathleen Turner). She’s married, but claims her husband is gone. Charley professes his love for her, she reciprocates, and she tells him that if she could, she’d marry him.

Back in New York, Charley learns that a couple of Prizzi employees in a Las Vegas casino have scammed the family for nearly three-quarters of a million dollars. One of those men has turned up with a bullet in his head, making the other a prime suspect. Charley heads back to L.A. to find Marxie Heller (Joseph Ruskin), collect the money, and then make Heller disappear. So it’s something of a shock when Heller’s wife turns out to be Irene Walker. It’s a bigger shock when Charley’s father (John Randolph, who’s the damn image of Carl Reiner) identifies Irene as the person brought into do the hit that Charley was accused of.

Charley, dangerous in large part because he’s not very bright, decides that since he loves Irene, he’ll believe her in everything and marries her. A partially-botched kidnapping puts Charley further in Dominic’s bad graces, so he hires Irene to kill him, not knowing that she’s married to the man he wants dead. The other side of the mob family, Don Corrado Prizzi (William Hickey) and his other son Eduardo (Robert Loggia) decide that Irene is a liability, and they hire Charley to get rid of her. And thus we have a romance with mob ties, or perhaps a mob film with a romantic through line.

The real revelation, though, is Jack Nicholson. Nicholson is great, of course. I’m sure there are people who don’t like his work, but I don’t know any of them. The one knock against him in general, though, is that he essentially always plays himself. Not here, or if he’s playing himself here, he’s playing a dim version of himself. Charley Partanna is essentially a well-trained dog. He doesn’t think for himself much and doesn’t think much at all when someone isn’t holding his leash. It’s my opinion that it takes a really smart actor to play dumb this convincingly, because Charley is also not a caricature. He’s mentally slow, but he’s not a cartoon, and he’s bright and savvy enough to be consistently menacing when he needs to be.

Prizzi’s Honor works, and it works as a romance, as a comedy, and as a mob film. I’m not sure it works well enough to be enshrined on The List, but it’s entertaining, and sometimes that’s enough.

Why to watch The Dead: It’s John Huston’s last and most personal film.
Why not to watch: For a film so short, it still takes some time to get started.

Why to watch Prizzi’s Honor: There is no better proof that Jack Nicholson can do more than play Jack Nicholson.
Why not to watch: Willing suspension of disbelief is required far more than it should be for a romance or a mob film.