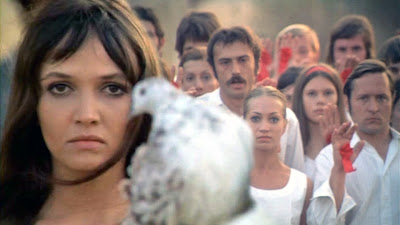 Today started out plagued by technical difficulties. I wanted to watch this on the big flatscreen in my living room today. Oh, the file worked just fine, but for some reason, the subtitles didn’t transfer over. This meant that once again I was relegated to the laptop. It’s not a problem; I’m just easily frustrated when my technology works less well than I had hoped. Regardless, Meg Ker a Nep (Red Psalm) is an unusual film. It’s easy to be impressed by it (the whole run time consists of a mere 27 shots), but just as easy to be bored by it.

The biggest issue with a filme like Meg Ker a Nep is that there is no real plot to follow. Oh, there’s a story here—there’s narrative, but there isn’t really someone or something we can latch onto to follow from start to finish. Instead, this film is about a failed workers’ revolt in Hungary. It’s not really about a specific revolt, working more as a pastiche of ideas and concepts. Characters aren’t important here. What’s important is not the story of a specific person, but the story itself.

I get the distinct feeling that this is yet another film I’d understand better and get more from if I knew my history. Sadly, my education has lacked much in the way of Hungarian peasant revolts. So I’m going to do my best here with the caveat that I might well be talking out my ass. This is also true because Meg Ker a Nep is by necessity and design highly symbolic. As mentioned above, this is a film about ideas rather than people, about a movement and an ideology instead of the people who made that ideology go. Because of this, it plays more like a stage play that takes place outdoors on a single set than it does a film. That there is also a great deal of singing does nothing to detract from that impression.

The closest I can come to defining this film in just a couple of words is that it’s a Hungarian Les Miserables. There’s a lot of peasant singing and chanting and walking around arm-in-arm. There are a lot of soldiers standing around looking aggressive and angry at the peasants. There’s even an element of liberte, egalite, fraternite running through the film. I half expected to see them storm the Bastille. At other times, unrelated to Les Mis, I expected a rousing chorus from Hair. Instead, there are topless women holding doves. Like I said, it works symbolically.

It seems like (and this is really the best I can do) this film is about the birth of a socialist movement of one sort or another. It certainly plays into the pro-proletarian ideology of the time. The happy dancing peasants, firm in their commitment to each other and their collectivism and desire for better treatment are all depicted some sort of youthful ideal. The soldiers who show up and surround them with bayonets are more monolithic. It’s the people with money who are definitely the bad guys here—there’s no hedging of the believe that those with capital do everything they can to keep down the noble workers, at least in the perspective of this film.

I’ve done my best to treat Meg Ker a Nep as fairly as I possibly could. I have done everything I could to look for the good and positive in this film and to find something that I could relate to. And I’m done with that now, because I’ve said all I can say about it without going into the territory I’ve wanted to go to since I started.

Meg Ker a Nep is a mass of images. I don’t get the point of much of it. Oh, I’m certain there is meaning here and there are plenty of important moments that passed over me without my understanding them. But I’m not even sure who everyone represents. A guy shows up and one point to talk to the peasants, and then he dies. He doesn’t get shot or beaten; he just dies almost in mid-sentence and suddenly there are priests there and a woman with a whip. It’s not quite surrealism, but it comes across as drug-induced.

So yeah, I just don’t get the damn thing. There simply not enough of a narrative here for me to have it hold my interest. I won’t deny that it’s pretty to look at. I also won’t deny that Jancso’s camera work is definitely something worth seeing; with an average shot length of about three minutes and constant camera movement, this is an artistically impressive piece of work. But it also comes across as Engels-Marx Superstar with occasional reference to Oklahoma!, and for that I can’t think of it as anything other than silly.

Why to watch Meg Ker a Nep: It is impressive technically.
Why not to watch: It doesn’t even try to be entertaining.