Down for the Third Time

Film: Drowning by Numbers
Format: Video from The Magic Flashdrive on rockin’ flatscreen. 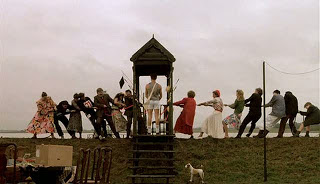 Peter Greenaway is a director I have trouble understanding in some respects. I mean, I think I get his films in large part, but his oeuvre is a collage of seemingly disparate elements sewn into a whole. There’s a part of his work that is reminiscent of a director like Oshima—it’s blatantly sexual and earthy, with much of the plot being driven forward by sensual desires and actions, often in what would best be called non-traditional places. There’s also a large piece of his work that touches on the body horror of a director like Cronenberg. The difference is that Greenaway’s work is set more closely in the real world rather than science fiction or horror, and the body horrors that crop up are those that might actually happen, or at least could happen. It was true of The Cook, the Thief, His Wife and Her Lover, and it’s true of Drowning by Numbers.

At least two of the words in the title of Drowning by Numbers are incredibly appropriate. Three people drown in the film, and the numbers from one to 100 appear in the film at some point. The story concerns a trio of women—grandmother, mother, and daughter, all named Cissie Colpitts (played by Joan Plowright, Juliet Stevenson, and Joely Richardson, respectively). In turn, starting from eldest to youngest, the three women drown their husbands and then coerce the local coroner Madgett (Bernard Hill) into helping them cover up the crime. For his part, Madgett is attracted to all three Cissie Colipittses, resulting in something not unlike the Three Billy Goats Gruff, where Madgett is promised something more and more wonderful each time he helps suppress the evidence of a deadly crime.

While the three drownings all have something in common—the drowning of a husband—they are also unique events, happening in different places and for different reasons. The eldest Cissie drowns her husband Jake (Brian Pringle) in the bathtub during a tryst with a young drunk local woman. His death, more or less, comes from his infidelity and a host of other minor annoyances. The middle Cissie kills her husband Hardy (Trevor Cooper) in the ocean because of his non-sexuality and his evident dislike of everything about her family. The youngest of the trio drowns her non-swimming husband of three weeks Bellamy (David Morrissey) in a swimming pool because she was disappointed in him and because she’d managed to get pregnant, which was all she really wanted in the first place.

Much of the counting and obsession with numbers in this comes from Smut (Jason Edwards), Madgett’s strange young son. Both Madgett and Smut are obsessed with games as well, playing a number of bizarre “ancient” games, some of which may actually be traditional games and others which were certainly created for this film. These games have bizarre and endless rules that make no sense, evidently existing only to confuse all of the players.

There’s also a great deal of sexuality in Drowning by Numbers, and it is a sexuality rather different than that in normal films. There’s no shame or embarrassment in sex and nudity in the country location of the film. Sex between couples is, more or less, something that simply happens and is a part of the natural world, much like sex between animals. Coming upon two dogs copulating would be no different in this world than finding Cissie #3 and Bellamy humping on someone’s couch.

There’s also an earthiness to this film that is unusual in a number of ways. I can’t think of a better word to describe it. Everything has a sense of the natural about it—food lies piled everywhere—apples cover the floor of rooms and the ground outside. There are also insects on everything. Strangely, though, this isn’t unpleasant and doesn’t give a sense of contamination or dirt, but something close to purity. Even the bugs convey this feeling of natural goodness and quality.

My biggest issue is that there’s a lot going on here that I simply have difficulty following. The constant games must mean something, but the rules make no sense. I can only think that there is a connection between these games and the sexual and criminal game being played by the three Cissies and Madgett, but other than the rules being arbitrary and confusing, I can find nothing. I’m also disturbed by the third drowning death. The first Cissie kills her husband because he cheats with much younger women and because of his terrible habits. The second Cissie kills hers because he’s a bastard. But the third? It’s almost like she does it to be part of the club.

I’m starting to think that I don’t love Greenaway. His vision is unique, and there are things I like in his work, but on the whole, his stories leave me cold. I find his take on sexuality unpleasant and his version of body horror uninteresting, and Drowning by Numbers does nothing to shift that opinion. In fact, it confirmed it.

Why to watch Drowning by Numbers: Like the games it presents, it’s more or less an extended puzzle looking to be solved.
Why not to watch: So much of it doesn’t make sense that it’s easy to get lost.