Prediction #2: The Cabin in the Woods

Film: The Cabin in the Woods
Format: Streaming video from NetFlix on various players. 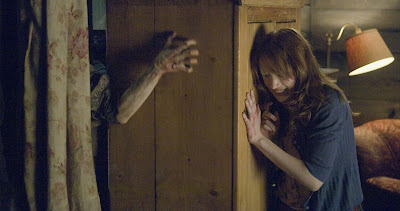 The set-up is a familiar one. Five friends have the opportunity to spend a weekend at a remote cabin in the middle of the woods, completely cut off from the rest of the world. No internet, no cell service, nothing. These five are the slutty Jules (Anna Hutchison), her jock boyfriend Curt (Chris Hemsworth), the relatively innocent Dana (Kristen Connolly), her potential scholarly paramour Holden (Jesse Williams), and the perpetually stoned Marty (Fran Kranz). The five set off in an RV, encounter a creepy old man at a gas station (Tim De Zarn), and eventually reach the disturbing and completely isolated cabin.

Once there, things seem extremely strange, almost as if they are being controlled by someone else. During a game of truth or dare, the trapdoor into the basement pops open, and the five descend. The room is littered with strange artifacts, and each person seems entranced or enamored of one of them. Finally, Dana begins reading out of an old diary. When she chants the incantation at the end of a passage, a group of torture-obsessed zombies arise out of the ground and begin hunting our hapless students.

Okay, all pretty standard horror movie stuff. In fact, this is straight out of Evil Dead as anyone with any horror knowledge will know. But there’s something much more going on here. Throughout this opening sequence setting up the monsters, we also spend a good deal of time with Sitterson (Richard Jenkins) and Hadley (Bradley Whitford) in a strange facility that appears in some way to be controlling the potential victims and the creatures they encounter. And this is where I have a quandary as a reviewer and critic. I’d love to go into more detail here, but the reality of the situation is so damnably inventive that I’d rather not spoil it for anyone who hasn’t yet seen the film.

Here’s the thing that really makes this work, and it’s something I don’t get to say very often in the context of a horror film: The Cabin in the Woods is really smart. Since it was made in large part in reaction to torture porn films that feature a parade of dumb people walking into dumb situations and getting ripped apart by something nasty, something more is needed. We still get people being ripped apart by something nasty (it is a horror film, after all), but the entire context of the film is a smart one. Not only does the over-arching story of the facility make sense in the context of the film, it also manages to put a bunch of other horror films into context as well, and does so brilliantly. Like any good genre re-write (like Scream), The Cabin in the Woods not only uses the conventions of the genre, it plays with them, defines them, explains them, and then breaks them in interesting and fun ways.

It’s also the sort of film that rewards the astute and careful viewer and fan of the genre with its references to other films. In addition to the obvious nod to Evil Dead, there are direct references to that movie as well as Hellraiser, Ringu and a number of others. I’m certain I missed a bunch of references here, some of which I’ll spot on a rewatch. Again, this is a smart film, and this is just more evidence of it. The references are often subtle (although not always) and never detract from the basic premise presented to us.

For non-genre fans, I suppose there’s not a lot here to recommend. For the typical viewer who watches horror movies only when forced to and then through fingers covering his or her eyes, this is nothing more than just another scary, gory film in a world filled with them. For the fan of the genre, though, The Cabin in the Woods is nothing short of a revelation of what the genre is capable of being—smart, funny, bloody as hell, and genuinely scary in places—and sometimes all of that at once.

The only films of the last couple of decades that play this well with the horror genre are the aforementioned Scream and the little-known and sadly underviewed Behind the Mask: The Rise of Leslie Vernon. All three manage to bend the standard tropes of horror into something rich and strange without losing the core reason why people who are horror fans love it in the first place.

In short, if you’re a horror fan, you’re doing yourself a major disservice if you avoid watching this. Track it down and revel in the joy of it.

Final note: I have hopes that The Cabin in the Woods may appear in the 10th edition of The Book, but those hopes are not very high. Looking through The List in its many varied stages, horror is one of the most under-represented genres out there. Great scary films of the current century--The Devil’s Backbone, 28 Days Later, El Orfanto, Ju-On are ignored completely, not even showing up for a cup of coffee as being worthy for a single year. My guess is that this one will suffer the same fate, being shoved to the side not because it isn’t worthy, but because the listmaker(s) have decided that the genre itself is of such little value.

Why to watch The Cabin in the Woods: It’s a complete rewrite of the horror genre.
Why not to watch: It’s far gorier than you might expect going in.

Email ThisBlogThis!Share to TwitterShare to FacebookShare to Pinterest
Labels: comedy, Drew Goddard, horror, The Cabin in the Woods