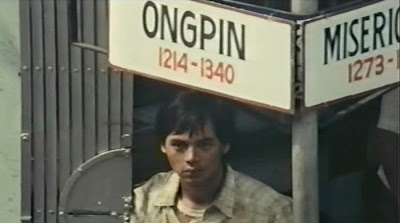 There’s a particular style of film that seems to really hate the poor. It wasn’t too long into Maynila: Sa Mga Kuko ng Liwanag (called variously Manila in the Claws of Brightness, The Nail of Brightness and The Claws of Light) that I realized that’s exactly what sort of film I had on my hands. Our hero, Julio Madiaga (Bembol Roco) starts the film as an underpaid itinerant construction worker. Despite his low pay, his bosses steal from him, skimming off the top of his negligible salary and refusing to pay overtime.

Julio has come to Manila from the provinces to search for his girlfriend Ligaya (Hilda Koronel). Ligaya was taken away from the village by a Chinese woman who promised her a good job in a factory—free food and enough money to send some back home to help with the education of her siblings. Ligaya doesn’t want to go, but does because of the promise of money. It’s not a difficult guess to figure out exactly what actually happened to Ligaya—she’s essentially be sold into prostitution. Julio, however, is slow on the uptake and naïve enough to not realize this for some time.

Julio’s life in Manila is not a happy one. He’s eventually laid off from his construction job and ends up with a group of male prostitutes. This is as unpleasant for him as you might expect, but he refuses to leave the city without Ligaya. At every turn, Julio, Ligaya, and his friends are screwed by the system, spat upon, trodden upon, and generally treated like the disposable human cargo they are in Manila. It plays a lot like El Norte but without the language barrier for the characters.

So what’s the emotional center of this film? One might think that it’s little more than “life sucks,” and I’d settle for that description of the film. Every time things look up even briefly, they immediately take a turn down (more shades of El Norte, although this one came first). Julio gets back on his feet temporarily and discovers his friend from the construction site has died in prison over a minor conflict. He tries to befriend his late friend’s sister, and then her house burns down and she disappears. Do we really have any right to think that things will be different when Julio finally locates Ligaya in the city?

Of course we don’t. This isn’t a film about redemption, or love, or battling our way through adversity or anything like that. It’s a film about what it’s like to be a member of the class of people for whom everyday existence is a struggle for survival. If you contrived to have the worst possible outcome for every encounter in this film for Julio, this film is what you’d come up with. He’s constantly a victim regardless of anything he does and anything that happens around him.

So maybe that’s what makes this film important. It’s claimed that Maynila: Sa Mga Kuko ng Liwanag is the greatest film to come from the Philippines, and that may be true; I don’t have a lot of experience with Filipino cinema. If that is true, though, it makes me wonder about the rest of the country’s cinema. This is not an enjoyable experience. We’re given a complete underdog character with nothing going for him, and the entire two hour plus running time is little more than us watching him get kicked over and over until it finally ends.

I hate films like this. I really do. Even when the film is a good one with solid production value and credible acting, it ends up just making me feel unclean at the end. Everything here is unclean and tainted, and the briefest moments of happiness are immediately destroyed. It’s a big ball of depression and oppression and social evil.

So here’s the thing—it’s not a bad film. It’s just not that much of a great one, because the story has been done to death. It’s not a film to watch when you’re in a low mood, because this will only intensify it and make it worse. If you watch it in a good mood, it will kill your mood completely. So I guess the biggest issue with it is that there’s not a good time to ever watch it, unless (like me) you’re committed to completing The List.

Why to watch Maynila: Sa Mga Kuko ng Liwanag: The Filipino version of a story you know.
Why not to watch: Every culture seems to have this story, so you’ve definitely seen it before.

Email ThisBlogThis!Share to TwitterShare to FacebookShare to Pinterest
Labels: drama, Lino Brocka, Manila in the Claws of Brightness, Maynila Sa Mga Kuko ng Liwanag, The Claws of Light, The Nail of Brightness