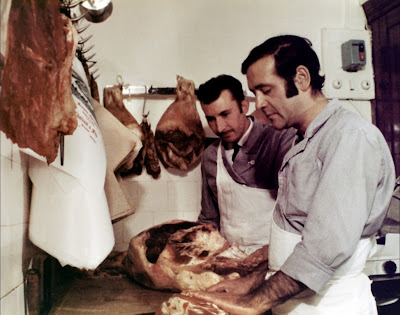 Here’s a warning right off the top: this entire review should be considered a spoiler for this film. If you don’t want it spoiled, don’t look below the jump. While it’s certainly conceivable that I could discuss Le Boucher (The Butcher) without resorting to spoilers, I’m not sure I see a way to do it. This film very much acts as its own spoiler, start to finish.

I’m not sure what Claude Chabrol was thinking when he called his film Le Boucher. While there is a butcher who is one of the main characters, the film is not specifically about him. The title calls attention to him specifically—and this isn’t a good thing when a large part of the film concerns a series of brutal murders. Calling this Le Boucher would be like Hitchcock deciding that Psycho would be better called Watch Out! Norman is Crazy!

So yes, I’ve just given away the ending of this film. Believe me, I really haven’t. If you can’t figure out on your own pretty quickly who the ultimate bad guy is in this film, you’re not paying attention. There’s a butcher who features prominently, and the murders are done by someone who butchers the victims. It’s not a shock when he talks about having seen bodies during his time in the military, or seeing people torn in half or being devoured by maggots. If you don’t get the vibe off him, it’s because you’ve either never seen a movie or you watched this one distracted the whole time.

Schoolteacher Helene (Stephane Audran) meets local butcher Paul, often called Popaul (Jean Yanne) at a wedding. The two sit next to each other and make small talk. They begin to see more of each other, and while it’s not especially a romance, they appear to be rather fond of each other’s company. At the same time, a series of brutal, grisly murders is happening in this small French town.

But it’s not too long before the creeper vibe starts coming off full strength from Paul, and not much after that the he becomes the only real suspect we have. At the midpoint of the film, when Helene is out with her students on a walk and they discover the body of the bride from the opening scene, it’s no surprise that Helene also finds the lighter she gave Paul as a gift. In fact, it’s expected—it merely confirms what we’ve already been thinking for a good 15 minutes or so. The fact that Paul seems to still have the lighter in his possession does nothing to sway us from that basic sense that he’s the only reasonable suspect in the killings. Seriously, if it turns out that he isn’t the killer, we’d rightfully claim that Chabrol has cheated the ending—there is simply no other character it could be.

The problem is that this completely strips the film of a great deal of the tension it could have. Once it becomes evident that Paul knows what she found at the murder site, once he realizes that she is aware yet another murder has occurred in the town he was just in, once he has reclaimed his missing lighter from her house, is there any surprise at all that the last 15 minutes of the film consist of Paul stalking Helene? That she acts in ridiculously stupid ways and allows him to get inside the building she lives in? That he’ll confess to everything while he slowly approaches her? Frankly, the conclusion may have a good deal of tension, but it’s only from the situation of a madman approaching our schoolteacher heroine, not because we’re at all surprised by his not-so-shocking revelation.

It’s a shame, really. There are ways to make a film like this work—certainly the earlier Peeping Tom, and there are some resemblances here—has not only an identified killer, but a sympathetic one as well. There are echoes of Les Diaboliques here, too, but sadly without any of the sublime tension that fills that film.

What makes this all worse is that ultimately Paul (and thus in a way, writer/director Claude Chabrol) blames Helene for Paul’s madness and his murder of innocent women. Helene, having been spurned in love in her past, has decided that she no longer wants or needs a lover, and instead dedicates herself to teaching her students. Paul cites this rejection of her as his reason to kill—his inability to have her causes him to act out on his frustrations. It is, frankly, insulting to suggest that Helene is a broken character because she has decided not to give herself over to a potential, and then fully realized, madman. It’s also complete bullshit—at least one of the murders occurs before Helene tells Paul she is not interested in a relationship.

When I think that I could have had Le Beau Serge or Rififi instead of what plays like a beginner attempt at a thriller, I get frustrated. Either of those—one of which is another film by Chabrol—would have been superior choices.

Why to watch Le Boucher: It echoes other, better films.
Why not to watch: If you can’t figure it out in the first third, you’re not paying attention.