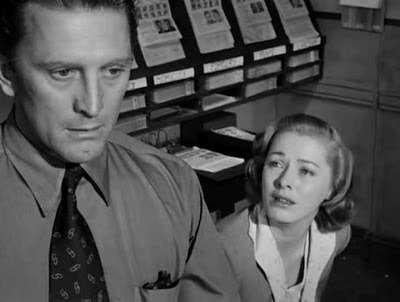 I love film noir, as any regular reader of this blog will know by now. While the endings are often harsh, they also tend to be the endings that the characters deserve (thanks in large part to the Hays Code). There’s a sense of justice that comes with film noir that doesn’t happen in a lot of other film styles. With Detective Story, the status as a film noir is far less obvious and something I only really realized after the fact. That’s not because it’s a bad noir, but because the focus of the film is not the typical.

Virtually the entire film takes place inside the station of New York police precinct 21. During the course of the film, we spend a little time with some of the cops and see a series of criminals and others come and go. There are those caught stealing, those who admit to stealing, and those who do what they can to avoid confessing to anything. We get petty crime and major crime. But most of what we see is the most tragic day in the life of detective James McLeod (Kirk Douglas), who goes from being a respected officer to a man completely broken by his own tragic flaws.

McLeod starts his day planning an evening out with his wife Mary (Eleanor Parker). Once inside the precinct, his day begins, and it’s a surrounded by and thoroughly filled with the actions of criminals. In particular, McLeod wants nothing more than to bring a man named Karl Schneider (George Macready) to justice. It’s not ever really spoken of, but through careful inference it can be determined that Schneider, a doctor who no longer practices medicine, is providing abortion services to women who need them. For the black-and-white world in which McLeod lives, Schneider is the enemy and must be stopped at all costs.

Both in this case and in one involving a young man (Craig Hill) who embezzles money from his boss to impress an old girlfriend, we learn that McLeod is inflexible. We also learn that his father was a criminal and essentially drove his son to this all-or-nothing view of the world. With the embezzlement case, the boy’s boss is persuaded to drop the charges, but McLeod won’t let him, demanding that he be prosecuted to the full extent of the law. McLeod is relentless in pursuit of justice as he sees it, letting nothing so paltry as sentiment stand in the way of getting a conviction.

Slowly, we see that McLeod is not the upstanding bastion of justice he believes himself to be. When Schneider gives himself up, having had pictures taken of his appearance before surrendering to the police, it is with the knowledge that McLeod might well take a swing or two at him. This and his treatment of the embezzler show us that McLeod is a man unable to compromise, unwilling to bend on anything. His partner Lou Brody (William Bendix) and boss Monaghan (Horace McMahon) do their best to rein him in, but to no avail. McLeod bends for no one.

What makes all of this work as a film is that Mary McLeod is carrying a secret, and it’s a terrible one. As the story plays out, more and more hints as to this terrible secret are revealed until everything comes out in the open, devastating Mary and McLeod, causing serious damage to their marriage and to McLeod’s self-image. Those things that are unable to bend may be strong in general, but are also prone to breaking—it’s the old fable about the massive oak tree knocked over by the wind while the feeble and slender reeds survive by bending instead of breaking. McLeod is an oak, and he suffers the same fate.

Through all of this, we have a parade of characters and criminals and weirdos who pass through the precinct on their way to night court. Lee Grant as an unnamed shoplifter frequently takes center stage. She’s a mildly sympathetic character in that she attempts to be sympathetic to everyone else in the place despite knowing that she’s confessed to shoplifting a purse and knowing that the mercy of the court may not be on her side. There’s also a side plot with the embezzler discovering that the girl he thought he wanted was not the girl he should probably end up with. Most critically are the thieves Abbott (Michael Strong) and Gennini (Joseph Wiseman), who play a pivotal role as the film draws to a conclusion.

What I expected from Detective Story was a crime drama, but not specifically a human one. Instead, the crime drawa was mostly secondary and there only because of the setting of the police precinct. This is a human drama about the unflinching and unchanging nature of James McLeod and the resulting tragedy that is forced by this tragic flaw.

I’m impressed. It’s not easy to fool me or surprise me in a film, but Detective Story managed to be fresh and surprising all the way through. This isn’t easy for a film a good 16 years older than I am.

Why to watch Detective Story: It’s more surprising than you think it will be.
Why not to watch: It ends the way most noirs do.