This Review is NSFW 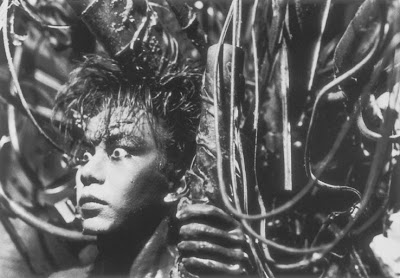 What in the monkey hell did I just watch? I mean, I’ve seen some massively fucked up movies in my lifetime and have even enjoyed some of them, but I’m not sure I’ve seen anything weirder or less understandable than Tetsuo (sometimes called Tetsuo, the Iron Man). Before my comments are filled with, “But what about…?” I know there are weirder films out there than this one, but I haven’t seen them. The only way to describe this is as industrial pornography. That won’t make sense if you haven’t seen it. If you have, you know exactly what I’m talking about.

Let’s see if I can make sense of this. I’m honestly not sure I can, but I’m game to try. We start with a man called the metal fetishist (director Shin’ya Tsukamoto) inserting a huge piece of metal into his leg lengthwise, sort of like a new femur. He passes out (from the pain, id’ guess) and when he wakes up, the wound is infested with maggots. This causes him to run out into the street where he is promptly run over by our unnamed main character (Tomorowo Taguchi).

The man and his unnamed girlfriend (Kei Fujiwara) dump the body in a ravine and then have sex. It’s kind of implied that they have sex because they’ve just dumped the body in the ravine. Oh, but the fetishist isn’t dead, and he starts infecting the man. By “infecting,” I mean that pieces of metal start showing up in the man’s body, poking their way to the surface. He’s attacked by a woman on a train platform, and while the attack goes on, the woman becomes more and more encased in pieces of metal—all the work of our friend the fetishist.

Think that’s weird? We’ve barely started. The man has a dream in which his girlfriend becomes an exotic dancer and rapes him with an animated metal hose. When he wakes up, he discovers more and more metal on his body, but he pretends like nothing is wrong. Y’know, it’s easy to pretend nothing is wrong when half of your face has wires sticking out of it. He feeds his girlfriend to the sound of metal-on-metal sound effects and then (and I can’t believe I’m about to type these words), his cock turns into a power drill. They battle back and forth for some time until she impales herself on the drill-cock.

And then the fetishist returns, turns the man’s cats into hideously screaming mutant metal/cyborg cat monsters, like if the Borg assimilated cats but allowed their slow cousins to do the work. The fetishist then animates the body of the dead girlfriend, splits out of it, and the two fight. I won’t tell you how this ends. I’ll only say that the ending of this film makes about as much sense as the rest of it, which is to say none at all.

This is more or less a Japanese version of Eraserhead except that it’s not as coherent. It’s a live-action anime, and it contains everything I tend to dislike about anime. I always feel like I’m missing something cultural, like if I knew Japanese culture better, I’d understand not what is happening, but I’d be able to put the why it’s happening into some sort of context. Perhaps I’m wrong and Tetsuo is nothing more than an industrio-erotic pain fantasy. If that’s the case, okay. It still doesn’t make sense, but okay. What’s more disturbing to me is that I’m almost certain that somewhere and at some time director/metal fetishist Shin’ya Tsukamoto has wanked off to this film, and probably more than once, and probably at the scene where the girl impales herself on the cockdrill.

There’s a lot of stop motion work here, some of it interesting. There are some tricks done with the camera as well—we get a lot of sped up action and strange camera angles. But is it any good? Not really. It’s interesting for a little bit and it’s some of the weirdest shit I’ve ever seen, but that most certainly doesn’t make it any good.

Ultimately, here’s my takeaway from Tetsuo: other people’s sexual fetishes are weird. That this film is about sex may not be obvious, but there’s a lot of physical penetration by objects, a lot of combining and coupling, and the end is almost Brokebackian in its homoeroticism. This doesn’t even begin to mention the massive number of phallic objects, including the thing we see at the end slouching toward Bethlehem to be born. Tetsuo is about Shin’ya Tsukamoto’s power drill cock. And based on that, it’s not worth the hour of your time it takes to watch it.

Why to watch Tetsuo: It’s a weird-ass trip.
Why not to watch: There is a very real sense that you are watching the director’s ideal pornography.

Posted by SJHoneywell at 6:45 PM