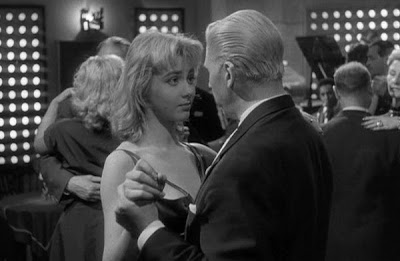 It’s pretty evident not too far into Bob le Flambeur (Bob the Gambler) that Jean-Pierre Melville loved American noir even before the term had been created. This film, while not properly a noir, has a lot of the elements of the style. It’s almost an homage to the American crime films of the ‘40s rather than a straight duplication of the style.

Bob Montagne (Roger Duchesne) is a well-liked, moderately wealthy, somewhat decadent ex-con living in the Montmartre area of Paris. We learn quickly that he did time for a bank job that went south, but that most people assume that he’s learned his lesson. His time is taken up by his love of gambling. He has a passion for cards and harness racing. As happens with gamblers, Bob goes through an extended losing streak, blowing most of his money on bad bets, leaving him not quite desperate but far from comfortable.

It’s at this time that Bob makes an important discovery. A local casino rakes in massive amounts of cash and is relatively unguarded at a particularly vulnerable time of day. With enough people and a good backer, it could be knocked over and make everyone on the team wealthy beyond their wildest dreams. Bob assembles a team, including his young and impetuous protégé Paolo (Daniel Cauchy) and expert safecracker Roger (Andre Garet). They create a plan and have everything set, but there are two particularly difficult flies in this ointment.

The first fly is Anne (Isabelle Corey), a young girl who goes home with any man willing to take her. Bob takes an interest in her initially, but she takes a larger interest in Paolo, who likes to brag. He tells her all about the impending casino job and tries to impress her with what he’ll buy for her when the job is complete.

The second fly is Marc (Gerard Buhr), a sometime pimp currently in trouble for a severe beating he administered to one of his women. Police Commissioner Ledru (Guy Decomble) tells him that the only way he’ll stay out of trouble is to give him a good tip on a major crime. It’s not that difficult to figure out that Anne, who is anybody’s girl for a night, will eventually go home with Marc. It’s also not too hard to figure out that Anne will spill the plan to Marc, who will then tell everything to Ledru. Ledru even has the plan confirmed by the wife of the team’s inside man because she wants him to hold out for a bigger slice of the pie.

Eventually, everything comes to a head and the heist goes down. It would be rude of me to say what actually happens in the heist itself, so I won’t, save to say that it’s both straight out of film noir and has a particular bit at the end of it that isn’t film noir at all. Everything is complicated (and made more noir-y) by the fact that Ledru and Bob have become friends since Bob’s release from prison.

There’s a lot to love here. The ensemble nature of the criminal team presages such films as Oceans 11 and The Italian Job (either the originals or the remakes). There’s also a good deal of the actual planning of the heist and Roger’s practicing safecracking, which reminded me a great deal of a film like Thief. I love stuff like that. Even more, there’s a scene of the basic heist. We first see something like a walkthrough on a floorplan of the casino spray painted on the ground. Second, we see Bob’s imagined plan—the criminal team walks through the actual casino, pulling off the heist, a view of what Bob hopes will happen when the job goes down. It’s a great scene because of how it works in the narrative. We get a chance to see the workings of Bob’s mind.

I enjoyed the hell out of this film in large part because of how much it shows Melville’s love of the American crime film. There’s not a single doubt that he studied plenty of gangster and similar films to make this one, and that love shows in every frame, from the crisp black-and-white photography to the costumes of the cast, to the fantastic soundtrack.

Beyond that, though, I enjoyed the hell out of this film for the film itself. It’s a great story, and Bob is very much a sympathetic character. He’s easy to like, charming both because of and despite his criminal and gambler tendencies. This is as good as a film like this gets—not bad for a guy putting his own spin on a genre created thousands of miles away. 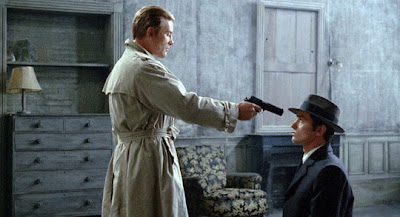 Now, I’m not going to pull any punches here. I liked Bob le Flambeur, but it’s not a patch on Le Samourai (inexplicably called The Godson in the Tome of Knowledge). If Bob le Flambeur is Jean-Pierre Melville playing with American crime films and film noir, Le Samourai is the realized thing, Melville demonstrating not just a love of the genre, but a mastery of it.

Jef Costello (Alain Delon) is a careful and successful assassin, as evidenced by his lack of a criminal record. We see him at is worst at the start of the film, though. He has been hired to knock off the owner of a nightclub. Despite pre-arranging his alibi with his girlfriend (Nathalie Delon), he either slips up or has tremendously bad luck. As he walks out of the office of the man he has just slain, he is spotted by Valerie (Cathy Rosier), who gets a good look at his bland but not unattractive features and his ever-present fedora and raincoat. He’s spotted by a few others in the club as well, and is rounded up by the police with a large group of potential suspects. It’s here that his bland features and unassuming manner serve him well—only a couple of the witnesses recognize him at all, and most aren’t sure. Despite this, Jef is the main suspect of the police, particularly the commissioner (Francois Perier).

It gets worse for Jef when he goes to collect his fee for pulling off the hit regardless of his being brought in by the police. Instead of a handful of cash, he gets a bullet in the arm and the realization that even the possibility of his being picked up by the police has made him a marked man. Now he has to get to them before they get to him. Meanwhile, the police are chasing him and bugging his apartment as well as harassing his girlfriend.

There’s a lot going on here. Melville has a number of elements in play that honestly don’t seem like plot points until they are suddenly central to the plot. For instance, we get the idea that Valerie did recognize Jef in the police line-up, but didn’t accuse him for some unknown reason. It’s curious, but it suddenly becomes obvious late in the film why this has happened. Melville could also have easily implied Jef’s skill as an assassin by giving him a lavish apartment with the latest conveniences. Instead, Jef lives alone in a dank apartment that is barely furnished. It’s very much as if the money is meaningless to him and he undertakes the jobs he does for the experience of doing it and the challenge of tracking down another kill.

The title is curious, of course, but makes sense. Jef is a samurai of sorts. His Spartan lifestyle and emphasis on being as perfect as possible gives him an air of the samurai. There is very much a sense of a desire for perfection in Jef Costello. He is meticulous about his appearance, as evidenced by his impeccable wardrobe and his nearly obsessive compulsion to make sure his hat is perfect. It is also effectively conveyed by Jef’s complete lack of facial expression through the film. He has no emotion tied to his work; he simply does it because he’s being paid to do so.

There is a way to see how much this film might have affected others’ films. I think it’s evident that Jim Jarmusch studied it when making Ghost Dog, and that Jef is in many ways the natural father of that character. There are differences, of course, and Jarmusch’s character is far more a student of Bushido than Jef will ever be, but there is a strong connection.

What I love here, though, is just how much Jean-Pierre Melville has adopted to the style of American noir. Again, the film is far more homage to the style than it is a duplication of the style. The story has many similarities to classic noir, but has enough important differences to keep it in the realm of influence instead of direct duplication.

I had never seen anything by Jean-Pierre Melville before tonight, so these were the first two of his films for me. Based on both, but most especially because of Le Samourai, I don’t think these will be my last Melville films. If these are his best, so be it, but he’s got to have a catalog worth exploring based on what we get with these two.

Why to watch Bob le Flambeur: Non-American noirs don’t get much better.
Why not to watch: If you’re a noir fan, the ending might not work for you.

Why to watch Le Samourai: Because it’s freakin’ awesome.
Why not to watch: I can’t think of a damn thing.