Lords of the Flies 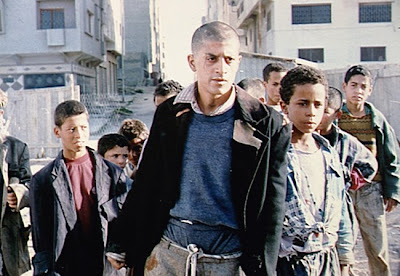 I understand exactly why people make films like Ali Zaoua, Prince of the Streets and I even understand why they are so important. I just wish I didn’t have to watch them. This is a film that is gutting like few others, although Cidade de Deus lands squarely in the same sort of real-world horror of children being forced to grow up long before their time and in the most awful way. This is not a pleasant film by any stretch of the imagination, and while there may be moments of sweetness here, it is filled with the sort of brutality that most of us pretends doesn’t really happen in the real world.

We start with a group of Casablanca street kids being interviewed. The one for whom the film is named, Ali Zaoua (Abdelhak Zhayra) is being interviewed. He claims that he ran away from his prostitute mother because she was going to sell his eyes to someone. He and a small group of friends have left a larger street gang run by Dib (Said Taghmaoui). Shortly after his interview, Ali and his friends are confronted by Dib’s gang. One member of the gang throws a rock that hits Ali on the temple, and Ali soon dies of the wound. So, our title character dies in the first 10 minutes or so of the film.

Now, his three friends, the new leader Kwita (Mounim Kbab), the scarred Omar (Mustapha Hansali), and the somewhat disfigured and manic Boubker (Hicham Moussoune) decide that Ali deserves a real burial. They determine that to do so, they must earn or steal enough money for his burial. They also decide to track down Ali’s mother (Amal Ayouch) and let her know that her son has died.

As the film goes on, several important things happen. Ali had talked about being a cabin boy on a ship and had arranged for a ship to take him on. Kwita, who ends up with Ali’s compass, begins to flirt with the idea of sailing away himself as a way to escape the terrible life he lives on the streets. At the same time, Omar, unable to tell Ali’s mother that her son has died, begins to get closer to her, allowing her to bathe him and take care of him, almost as a surrogate for her lost son. Through all of this, the three deal with the continual desire to bury their friend. There is the additional significant problem of getting Ali out of the hole in the dock area that they have stored him. Kwita’s ascension to cabin boy and working with the old sailor (Mohamed Majd) who originally hired Ali causes a rift between the trio as well, particularly when Boubker tries to join in as well.

All of this sounds rough enough, but there’s explicit evidence that Dib and his gang initiate new members by raping them. The kids, particularly Omar and Boubker, are addicted to sniffing glue, which causes some bizarre actions. In Kwita, the glue cause animated hallucinations that are vivid, childish, and beautiful. These fantasies come with a wife for Ali, who is a girl that Kwita sees repeatedly and develops an infatuation with.

But despite this beauty, this is a film of pain and tragedy. There’s not much that happens here that is good for anybody. In that respect it is a harsher, more brutal version of Cidade de Deus, which I didn’t think was possible. There is kindness in Hamid, the old sailor, but even this seems to come to nothing.

It’s impossible for me to say I liked this film, because this is not a film that is there to be liked. It is instead a film to be experienced because it demands to be seen. What it comes down to for me, though, is that I don’t like to see kids in pain or forced into these terrible situations. It makes this a difficult film to sit through, and not one I’m likely to sit through again. Much of this is made worse specifically because so much of what happens seems directed or even desired by the kids. It’s evident that Ali could have had a real life, but instead decided against it. It’s tragic in large part because it is so terrible and because it is so innocent at the same time.

Why to watch Ali Zaoua, Prince of the Streets: You will appreciate everything in your life.
Why not to watch: You’ll feel like a shit for complaining about anything.