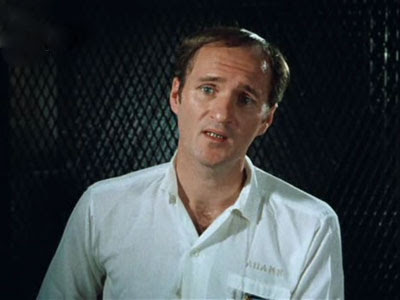 Everyone has fears. For me, physical confinement is a real issue. I’m also freaked out by spiders. I don’t fear snakes or public speaking, though, and those tend to be extremely common fears for many people. While we all have our own fears, there are a few that tend to be universal or nearly so. One of those fears is of being the victim of a miscarriage of justice. How would any of us react if we were incarcerated for a crime we didn’t commit? What if that crime ended us up on death row? That’s precisely the case under investigation in Errol Morris’s The Thin Blue Line.

The case in question is that of Randall Adams. Adams and his brother were on their way from Ohio to Texas when they arrived in Dallas. Through a series of minor misadventures, Adams ran out of gas on the road and was picked up by a young man named David Ray Harris. The two spent some time together before Adams claimed that he returned to his motel. Unbeknownst to Adams, Harris was driving a stolen car. Additionally, he had several guns in the car with him.

Later that evening, a police officer named Robert W. Wood pulled over the car in question because the car was driving without lights. When he approached the car, he was shot repeatedly and killed.

And here’s the nut of the film’s argument—the case is made that the crime was committed by David Ray Harris. Harris was 16 at the time and already had a substantial criminal record. Adams, not a native Texan, was in his 20s at the time and did not have a criminal record or a reason to shoot Wood. However, the two had been associated with each other for a day or so. More significantly (and this is really the nut of the film), the case is made that Adams was tried and convicted for the crime specifically because Harris’s age prevented him from standing trial in a death penalty case.

The Thin Blue Line also makes the case that much of the testimony accepted in the case was actually perjury and that specific lines of defense that would have been useful for Adams were denied by the Texas judicial system. In fact, Harris was brought in as a witness against Adams, testifying against him for the crime that the film posits Harris himself committed. At one point, Harris even says he believes Adams is innocent, and claims he thinks this because he is the one who would know.

The case against the Texas judicial system is an interesting one. Texas has long been the nation’s capital in executions, with nearly 38% of all American executions since 1976 and close to five times the number of its runner-up (503 vs. 110 in Virginia over the same time period). It’s a common stance that the Texas legal system is bloodthirsty and would rather convict an innocent man for a capital crime than allow a crime to remain unpunished.

Director Errol Morris does not appear in the film at all, and only shows up as a voice on a tape recorder at the end of the film. As such, he does not provide a running commentary of the story as it unfolds. Instead, he interviews a number of the key players including Adams (his death sentence commuted to life at the time of the filming), Harris (on death row for a different murder), the prosecuting attorney, several witnesses, and Adams’s lawyers. The crime is reconstructed, careful never to show the gunman as either Adams or Harris. The most damning part of the case is the presents of Dr. James Grigson, a psychiatrist used by the state of Texas to determine whether or not an accused criminal will commit a similar crime again. Grigson had the nickname “Dr. Death,” since his reputation was that every suspect was simply waiting for a chance to commit more crime, and his testimony helped put more than 100 people on death row.

Morris was smart enough to realize that a real-life story of judicial malfeasance was story enough without much in the way of bells and whistles. He instead simply lays out the case, using shots of newspaper articles, re-enactments, and interviews with the parties involved to allow the story to tell itself. It’s a remarkably compelling tale, not for the least reason that it’s one that plays on a basic human fear of being wrongfully accused of a terrible crime.

Interestingly, the aftermath of this case is almost as compelling as the case itself. Adams was eventually released, but was never pardoned, and never received any recompense from the state of Texas. He also took Errol Morris to court for the rights to his own story.

This is very much worth seeing. Adams’s case is a fascinating one, and Morris’s delivery of the principal facts in his argument is without fanfare, allowing the compelling nature of the story itself to tell the tale. This is how a documentary should be done, and The Thin Blue Line is rightfully considered a must-see.

Why to watch The Thin Blue Line: Because stories like this need to be told.
Why not to watch: You’ll become infuriated by American justice.

Posted by SJHoneywell at 8:48 PM