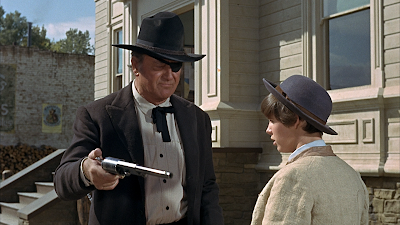 I had hoped to put up a review of Driving Miss Daisy today, since it’s the only Best Picture winner I haven’t reviewed. Alas, the vagaries of NetFlix delivery and the USPS have prevented me from getting a copy until later this week. Ah, well. But there’s still time for a last review before the year turns.

When you talk about John Wayne films, eventually someone will get around to True Grit. It certainly ranks in the pantheon of Wayne’s performances, but for my money, it’s not anywhere close to his best film. The Searchers is one of the two or three greatest Westerns ever made, and it would be hard to discount Stagecoach and The Shootist. And yet, True Grit is the film for which Wayne won an Oscar.

While Wayne is certainly one of the focuses of the film, he’s not where we spend our time initially. We first meet Mattie Ross (Kim Darby) as her father is heading into town with one of his men, Tom Chaney (Jeff Corey). Chaney, after a night of drinking and losing at cards, pulls a gun on his boss and shoots him in cold blood. This, then, is our real introduction to Mattie, as she heads to town to retrieve her father’s body and belongings and then to find a man to hunt down Tom Chaney.

Mattie is a unique character. Any write-up you’ll find of True Grit calls her a tomboy, but that’s a complete fabrication. Mattie isn’t a tomboy; she’s an adult in a young girl’s body. Mattie is the type of person who can’t let anything go, demands to have her own way in everything, speaks her mind when she shouldn’t, and refuses to compromise on any point when she thinks she is right. She’s doesn’t want to be or think she’s a boy. She wants to be taken seriously by everyone she encounters. She’s also willing to toss out the name of the family lawyer, J. Noble Daggett, at a moment’s notice.

Since Chaney has run off into Indian country, the local law has no jurisdiction. After a quick survey of the local marshals, she sets her sites on Reuben “Rooster” Cogburn (Wayne), reputed to be the meanest and least compromising of the marshals in the area. Cogburn is also everything Mattie distrusts—he’s sloppy, old, and a drinker. But, he has “true grit,” which makes him the man for her. She also encounters a Texas Ranger named La Boeuf (pronounced “luh-BEEF” and played by Glen Campbell). As it happens, La Boeuf is looking to bring in Chaney as well, since there is a large reward on the man’s head in Texas. Mattie isn’t a fan of La Boeuf, but Cogburn wants the help and a share of the larger reward money, so the three join up.

La Boeuf doesn’t think much of Mattie, either, and does his best to dissuade her from joining on the ride in to Indian country. Eventually, Mattie proves herself simply too dogged and determined to be left behind. The groups begins to hunt for Lucky Ned Pepper (Robert Duvall), a leader of an outlaw gang who Chaney is now riding with. Eventually, the two parties meet up and there is plenty of shooting, switches in who has the high ground, a few deaths, and an attack by a rattlesnake. And, of course, as a Western form 1969, it all ends as we want it to.

And so we come to the nub of things. When I reviewed the remake of True Grit a couple of years ago, I said that I wasn’t sure how it would compare with the original. Well, now I’ve rewatched the original and refreshed my memory. The remake is better. It’s played darker and more realistic for one thing. John Wayne may not play as well to a modern audience as Jeff Bridges (call that a push). I’ll take the original casting of Robert Duvall and Dennis Hopper over Barry Pepper and Domhnall Gleeson respectively from the original cast. Beyond that, the casting certainly goes to the remake. Matt Damon over Glen Campbell certainly, and I’ll take Josh Brolin ahead of Jeff Corey every day.

And then we get to Mattie herself. In the remake, Hailee Steinfeld made the film what it was. Her version of Mattie Ross is cold, no-nonsense, a girl with an adult’s mind and a psyche with hospital corners. What’s more, she looks the part. Kim Darby was 22 playing 14. She’s much too eager and too much demanding the attention of everyone at all times. In 50 years, people will still remember John Wayne’s Rooster Cogburn role, but they’ll also remember Hailee Steinfeld.

And so that’s what we get here—a perfectly serviceable, even very good Western that has aged a bit too much and has been usurped by a superior remake. There’s nothing wrong with that, and the 1969 version of True Grit is still very much worth seeing. But if you can only see one, you should really see the one from 2010 because aside from the Duke and a couple of other characters, the remake is better in almost every way.

Those of you who prefer the original can commence to throwing stones.

Why to watch True Grit : John Wayne was so much better than his caricature.
Why not to watch: Because this is one of those cases where the remake is genuinely better.