The Boys from Brazil

Film: The Boys from Brazil
Format: Streaming video from NetFlix on laptop. 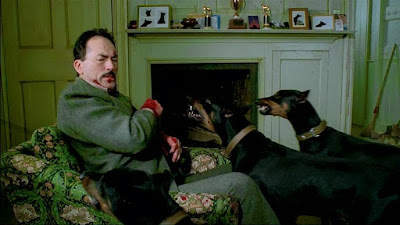 Often, the strangest premise makes for the most interesting film. That’s certainly the case with The Boys from Brazil, which has a premise that jumps into the bizarre with both feet. I genuinely question how far I should go into spoiler territory here, but without an actual discussion of the plot, I’m not sure how much I can really say about it. The NetFlix summary comes close to spoiler territory, so I guess the best option is to simply assume that the rest of this should be considered under a spoiler tag, or at least everything beyond the jump.

When I suggest that The Boys from Brazil works from a bizarre starting point, the most non-spoiler way I can explain that is by saying “South American Nazis.” What makes this one special when compared to the more lurid films of this nature is the cast. Check the cast list of this on IMDB; the first three names you’ll see are Gregory Peck, Laurence Olivier, and James Mason. Granted, since this was from 1978, all three men are in the twilight of their careers, but that’s some significant star power. Toss in Denholm Elliott, Bruno Ganz, and Lilli Palmer, and bizarre story or not, this is a film to pay attention to.

Anyway, we start no with them, but with a man named Barry Kohler (Steve Guttenberg, yes that Steve Guttenberg). Kohler is evidently tracking a number of men in Paraguay, one of whom turns out to be Dr. Josef Mengele (Gregory Peck), the doctor from the Auschwitz concentration camp made infamous by his horrible experiments on human subjects. Kohler has managed to get a transmitter placed in a prominent Nazi’s house. Through this, he overhears a plot to kill 94 men, all aged 65 and low-placed civil servants, around the world. Armed with this information, he contacts renowned Nazi hunter Ezra Lieberman (Laurence Olivier), but is murdered while on the phone.

Lieberman enlists the aid of Sidney Beynon (Denholm Elliott), a man who works for Reuters, asking for any news of civil servants dying by accident. Slowly, the plot begins to unfold. Eduard Seibert (James Mason) arrives to tell Mengele that the plans are continuing apace, but that many of the operatives are worried about Lieberman. Regardless, the “accidental” deaths of the civil servants continue apace. For his part, Lieberman begins visiting the families of the men killed and discovers to his horror that each family appears the same. The father was older than the mother by a number of years and emotionally distant. The mother is smothering to her only child, invariably a boy. More disturbing, the boys (all played by Jeremy Black) are virtually identical in appearance and attitude.

And here’s where things get fully into spoiler territory. We learn that the actual plan Mengele is enacting is to return Hitler to the world. Each of the 94 boys is an exact clone of Hitler, made from extracted DNA and surrogated by a woman in a Brazilian medical clinic run by Mengele. The idea is to recreate Hitler’s life as accurately as possible, thus killing the father in an “accident” at 65. Lieberman starts to catch onto the plot, which causes Seibert to attempt to pull the plug on it. Seibert destroys Mengele’s jungle compound, but Mengele vows to continue on his own, arriving at the Pennsylvania home of Bobby Wheelock (Black) to continue the plot of raising new Hitlers. As it happens, Liberman has zeroed in on the same family and has come to warn them that something is amiss.

So yes, this is a strange plot, ripped directly out of the pages of late 1940s and early 1950s pulp magazines and potboiler novels. And yet with the cast we have here, there’s a certain amount of class to the proceedings. In that sense, it reminds me of the film Eyes Without a Face, which would be ridiculous if not for how well put together it is. Despite its strangeness and almost ridiculous premise, The Boys from Brazil manages to be incredibly disturbing and completely compelling throughout. A lot of that goes to the main players, of course, but a great deal of that is because of just how solidly made the whole thing is.

There’s a lot of minor creepy touches going on here. For instance, at Mengele’s jungle compound, there are a number of young native children, all with startling blue (read: Aryan) eyes. They don’t have much to do with the plot; they’re just creepy window dressing. It’s little touches like this, like the obvious pleasure that Hitler clone Bobby demonstrates when seeing terrible carnage, that sell the entire premise and make the film work all the way through.

I like The Boys from Brazil almost in spite of myself and in spite of how salacious the plot. It helps that it sticks the ending, which is equal parts entertaining, upbeat, and disturbing.

Why to watch The Boys from Brazil: Two great actors and a damn weird story.
Why not to watch: The whole “Nazi plot” feels weird coming from 1978.