Off Script: The Lair of the White Worm

Film: The Lair of the White Worm
Format: Streaming video from NetFlix on laptop. 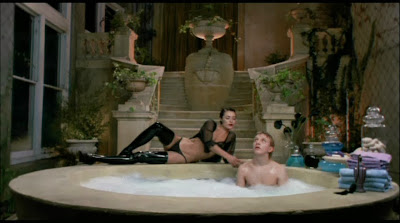 You just have to love Ken Russell. Even when his films aren’t that good, they’re fun as all hell. Additionally, once you’ve seen a Ken Russell film, you can spot one a mile off. I’ve seen four or five of them, although it’s been some time since I saw Gothic and I’m not sure I saw all of Mahler. Still, there are more than a few similarities between The Devils, Altered States, and today’s film, The Lair of the White Worm to suggest that Russell has a definable style, or at least an oeuvre.

The Lair of the White Worm is loosely based on the book by Bram Stoker of “Dracula” fame. As bizarre as Dracula is in places, it’s got nothing on this one, particularly filtered through Russell’s sensibilities. An archaeology student named Angus (Peter Capaldi when he was very young and blessed with a heady of playful curls) discovers an odd, giant skull on the property of a pair of sisters running a farm. Mary (Sammi Davis) and Eve (Catherine Oxenberg) have kept the farm going despite having their parents go missing the year before. Meanwhile, the new Lord James D’Ampton (a very fresh-faced Hugh Grant) throws a party to commemorate his ancestor’s killing of a legendary dragon/wyrm/worm.

Also arriving on the scene is Lady Sylvia Marsh (Amanda Donohoe), who is beautiful, mysterious, and evidently dangerous. It doesn’t take us long to discover that Lady Sylvia is something of a were-snake, and her venom is capable of either incapacitating her victims or infecting them with her own ophidian lycanthropy. She steals the skull Angus found and finds a couple of victims for herself.

Everything comes together when the pocket watch of Mary’s and Eve’s father turns up. A little bit of investigation leads the pair as well as James and Angus to realize that a series of caverns is actually connected to Temple House, the home of Lady Sylvia. Sylvia, looking for a sacrifice for her snake god, captures Eve and prepares her for her big moment in the belly of the snake. The other three realize that something is wrong and begin to investigate, and find quite a bit more than they bargained for.

So on its surface, The Lair of the White Worm is a pretty standard B-level monster movie. However, since this was made by Ken Russell, it’s also completely insane on almost every level. Russell’s films are identifiable by a number of common ideas, themes, and scene types. They’re not only all here, they’re all here in the most over the top form that I’ve seen from the man.

First, there’s a great deal of religious iconography, a great deal of it blasphemous. Much of this, as with Russell’s other films of which I am familiar, comes in dream or hallucinatory sequences. An epic one is suffered by Eve, who sees a serpent-entwined Christ on the cross looking down on buxom, mostly-nude nuns being raped by Roman centurions. That’s another hallmark of Ken Russell—lots of weird sex and nudity. James D’Ampton has a dream at one point that is absolutely the king of these in the film. Eve and Susan, both dressed as old school stewardesses (yes, I’m using the term intentionally, because they were dressed like stocking-clad sexy versions of 1950s air hostesses) wrestle in the aisle of an airplane. Meanwhile, the tied up D’Ampton is holding a red felt tip pen over his groin which, in close-up, periodically rises more and more upright. It’s fantastically campy and obvious, and completely hysterical.

There are all sorts of bizarre sexual imagery here. Lady Sylvia, at one point, straps on a massive pointed dildo (perhaps ivory? Perhaps the fang of a giant snake?) and prepares to rape Eve just before her sacrifice. It’s hard to call this funny, but it’s impossible to take it seriously. One of the plot points is that Eve is still a virgin (that’s why she’s a good sacrifice), but evidently getting her ready for the big moment means ramming a foot of pointed ivory into her hoo-hah. I gather that this is supposed to be disturbing (it is), but it’s also very difficult to see as a logical step in virgin sacrifice.

There’s plenty of other sex here, of a more standard (at least on the surface) variety. Most of this comes in the form of Lady Sylvia. I know she predates this, but she reminded me a great deal of the Borg Queen in Star Trek: First Contact. There is a decidedly sexual cast to her (the thigh-high boots and g-string don’t hurt, as in the picture above), but also a palpable level of threat. In fact, that threat is part of her sex appeal. There’s also something serpent-like about her, even when she isn’t sporting the giant fangs.

That’s perhaps the biggest problem with The Lair of the White Worm and with Ken Russell in general. So much of what he does is so completely off the wall that it’s difficult to take it seriously. When James blasts snake charming music, Lady Sylvia rises up out of a corded basket and slinks sinuously down her hallway toward the sound of the music. It’s ridiculous, but it’s also ridiculously fun in a camp way.

The Lair of the White Worm isn’t the mind screw of Altered States or The Devils, but it’s a hell of a lot of fun, not the least of which reason being the presence of Peter Capaldi and Hugh Grant before anyone knew who they really were.

Why to watch The Lair of the White Worm: Ken Russell films are always a head trip.
Why not to watch: It’s hard not to laugh at times.

Email ThisBlogThis!Share to TwitterShare to FacebookShare to Pinterest
Labels: horror, Ken Russell, The Lair of the White Worm