Really good stand-up comedy is hard, but it’s not that uncommon. Truly great stand-up, though, is rare and wonderful to behold. When you see a great comedian, someone who is really transcendent, it’s almost always someone who is pulling from a great storehouse of pain to make that comedy. Listen to Patton Oswalt talk about his depression. Listen to Tig Notaro talk about her breast cancer. Richard Pryor’s best material came from the worst episodes of his life. Bill Hicks dug into the bedrock of his soul to create routines that are still funny and still relevant 20 year after his death. And all of them owe a huge debt to Lenny Bruce. 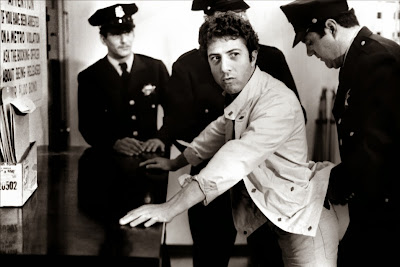 Bob Fosse’s film Lenny is about the brilliant but troubled and doomed comic whose meteoric career made him a massive star and equally made him a victim of the times in which he lived and performed. Bruce’s arrests and various trials on obscenity charges are fascinating in no small part because they seem so tame by current standards. Certainly some of his work is still shocking and has incredible power, but the things for which he was dragged into court are heard nightly on cable television. Still, for the time, Bruce flouted the law whenever possible. It made him a legend, and also probably killed him in the end.

The film that Lenny reminds me of the most is, at least in one sense, Citizen Kane. It has that sort of feel to it. The film takes place in the present of when it was made, almost a decade after Bruce’s death. Much of the film takes place as an interview of Bruce’s ex-wife, Honey Bruce (Valerine Perrine), who, over the course of the film is blunt about her past as a stripper, her two-year stint in prison, and her frequent drug use. We also get interviews with his agent and his mother. We also get re-enactments of some of his various court appearances and some of his stand up performances. To do this, Dustin Hoffman as Lenny Bruce put in one of the most complete performances of his career.

Ultimately, Lenny is a tragic film for a number of reasons. The first, and while this is certainly the perspective the film wants us to have, is that Bruce was unfairly treated by the justice system. Additionally tragic is that Bruce’s comedic genius came from the same place as his self-destructive behavior. The more he was wound up and wound himself up, the more relevant and pointed he became, and the shorter it made his life expectancy. Ultimately, it is most tragic because Bruce’s life and career were curtailed by things that less than a decade later became the common parlance of comics around the country.

This is a genuinely great film, the sort that fairly demands to be seen. The choice of shooting in black-and-white is absolutely the right one, giving the whole thing not only the air of Kane but also of something like a newsreel. It’s beautifully acted as well, bringing in Oscar nominations for both Dustin Hoffman and Valerie Perrine as well as one for Fosse himself. In fact, the only way I can think of to improve it is to add more to it, specifically to add more of Bruce’s monologues. These are highpoints in the film, and while they are used well, it stands to reason that more instances of the man’s actual work would be interesting in a film about his life.

The best comedy, the stuff that really stays with us, is more than simply funny. The really good comedy is the stuff that has something real to say beneath the humor. Bruce’s material was filled with truth and tinged with tragedy, something he shared in common with many of the truly noteworthy comedians of the last half century. It’s important to remember that Lenny Bruce paved the way for this. Had he not suffered for his art the way he did, many of the other comedy greats would have never had the chance to succeed.

So is the material offensive? Sometimes it is. Is it obscene? There is where you’ll have to make your own choice. Bruce’s stance was always that the real obscenity wasn’t the words he was saying but in the way society works and in the way society treats its people. It’s hard not to come to that conclusion, even in the potentially over-dramatized world of this film.

If you haven’t heard any of Lenny Bruce’s work, you owe it to him to listen to some, even for just a few minutes. This film is well worth your time, too. Like all good comedies, the source of the humor is very real and terrible pain. Watch it and laugh at that pain. It’s what Lenny would have wanted.

Why to watch Lenny: A fascinating portrait of a true original.
Why not to watch: It goes places unpleasant to see.