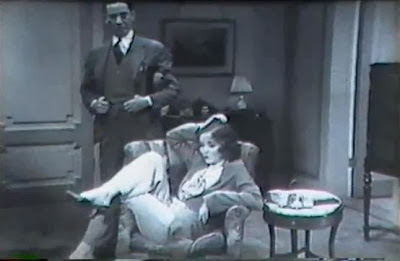 When you watch movies based on a list, you’re apt to run into ones that strike you the wrong way. The Devil’s Holiday is one such film. The premise is a pretty standard one, and I’m used to the acting style of the late ‘20s and early ‘30s that this didn’t bother me too much. There’s just something about this film that hits me wrong. By the time I got to the end, I knew exactly what the problem was, but I was catching hints of my issues almost immediately.

In a city—it may be mentioned which one specifically and New York is always a good default—a young woman named Hallie (Nancy Carroll) works as something a baby step away from being a prostitute in addition to her duties as a manicurist. Basically, she’s a freelance escort called in by various salesmen looking to close large deals, and she makes her living by getting a small piece of the commission on these sales. When a rube named David Stone (Phillips Holmes) shows up, Hallie is called in to soften him up to make a big deal go through. Hallie is excited because she’ll get 3% of the take, which will (she hopes) propel her on to her dream of living in Paris.

David, though, is a rube. He doesn’t seem to understand that Hallie is there to keep him happy. Instead, he falls for her and falls hard. When David’s brother Mark (a dyspeptic James Kirkwood, who I thought at first was Mark’s father) arrives and confronts Hallie, she decides on a new plan. She accepts the proposal with the plan of being so awful that David’s wealthy father will be so disturbed by her that he’ll pay her off, funding the rest of her life.

The one unexpected moment in the film comes when Hallie is working on getting that payoff from David’s father Ezra (Hobart Bosworth). David, convinced that Hallie really loves him and has chosen to be with him, gets in a fight with Mark. Mark eventually retaliates and pushes David down a flight of stairs. David is seriously injured and requires immediate medical attention (we get plenty of shots of him looking plaintive with his head wrapped in bandages) while Hallie leaves with her money and plans for Paris.

But of course you know where this is going, don’t you? Hallie decides that she actually does love her rube and while she puts on a brave face of leaving for the life she has planned for her whole life, she is lost in thought about her damaged man. And since the Stone family is evidently religious beyond all bounds of reason, you can probably see where we’re heading here.

Surprisingly, it’s not the religious content that bothers me the most, although it does bother me quite a bit. When the key moment happens, it’s relayed to us as a religious conversion, and I object to that on general principles. No, the big issue here is that I don’t buy a damn bit of it. I buy the film through the first half, although there were indications of the ending to come. What I don’t buy at all is Hallie deciding that she actually loves this guy that she tricked into marrying her. There’s absolutely no indication and no reason for her to decide that she actually loves this guy. It’s completely out of nowhere, and I simply don’t buy it for a moment.

Nancy Carroll is the reason I watched this, since she was Oscar nominated for her performance. It’s a fine performance, although it is one that is pretty firmly ensconced in that early 1930s style of acting. While it doesn’t really carry over to the present day, I get that it’s a good performance for its time. She’s an appealing actress on the screen, and while there are moments of vast over-acting, she handles the part well.

This is even true of when the film hits its maudlin point. She’s good in this part of the film, too. I just don’t buy it from what we know about the character. That’s the big problem with The Devil’s Holiday. Regardless of how good people are, it’s the plot itself that makes the film fail and fail hard.

On a final note, I’d have loved to have seen some better casting. I don’t buy Mark Stone as David Stone’s brother for a heartbeat. Phillips Holmes (David) was 23 at the time of the filming. James Kirkwood playing his brother was 55. I get that that can happen sometimes and can really work, but James Kirkwood looks 30 years older than his on-screen brother. Why not make him an uncle? Or hire a younger actor?

Why to watch The Devil’s Holiday: It’s inches away from a screwball comedy but holds out for something different
Why not to watch: It’s so sappy you could turn it into maple syrup.