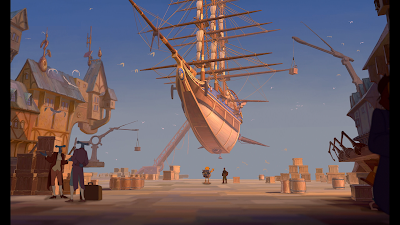 When “Best Animated Feature” turned out to be the new category, I was happy for a few reasons. First, it was the smallest category, which meant a smaller collection of films added to my already huge number. That’s a good thing. The other reason is that I often like animated movies, provided they don’t get too sappy. One of the ones I was most interested in seeing was Disney’s Treasure Planet. One reason for this is simple: I’d heard a lot of good things about it despite its tanking at the box office. The second reason is a bit more complicated.

I have a friend named Doug. Doug has several passions. Two of those passions are his enduring love of science fiction and his equally enduring love of swashbucklers and pirates. Doug loves the concept of swashbuckling in space, and I’m sure he’s not the only one. Actually, I think It’s a pretty cool concept, too. And that’s the idea behind Treasure Planet. This is a science fiction version of Treasure Island, down to the characters and the costumes, but it takes place in a bizarre future. It’s Firefly for the pirate crowd in that sense. The space ships are actually sailing ships using solar sails, but rigged and designed to look like 18th Century wooden ships. It sounds bizarre, but it’s a great combination. There’s that reckless sense of adventure combined with real exploration. How could I not want to see this? And how come Doug doesn’t wear a Treasure Planet shirt every day of his life?

The story is, of course, Treasure Island with gizmos. Jim Hawkins (Joseph Gordon-Levitt) is a troubled teen who wants to make something of himself but is constantly thinking of sailing with the solar ships into the void. His mother (Laurie Metcalf) is worried about her son, in part because she is busy running an inn, in part because Jim is constantly in trouble, and in part because her husband walked out on them several years earlier. Things change for the family when a ship crashes near their inn. A creature named Billy Bones (Patrick McGoohan) crawls out warning of a cyborg, hands Jim a sphere, and promptly dies. A band of cutthroats arrives soon after and burns down the inn.

The sphere, it turns out, is a map to a fabled treasure planet. Jim goes off with family friend Dr. Doppler (David Hyde Pierce) and hires a ship. This ship is run by Captain Amelia (Emma Thompson), seconded by Mr. Arrow (Roscoe Lee Brown) and crewed by a bunch of evil men led by the cyborg John Silver (Brian Murray). And of course Silver is actually a pirate, as are all of the crew, and they plan a mutiny when the crew reaches the treasure planet. In the meantime, Jim takes to him as something like a father figure. The parrot from the original story is replaced by a little floating shapeshifter named Morph (Dane A. Davis) who splits time between John Silver and Jim.

If you’re familiar with Treasure Island, Treasure Planet doesn’t hold a ton of surprises. If you don’t know the source material, there still aren’t a ton of shocks here. The guys who look evil are evil, while everyone who looks solid and decent is. And since this is based on a story when happy endings were the norm (and because this is a film for children), we get something like a happy ending here.

There’s a lot to like with Treasure Planet, not the least of which is the inventive setting. Taking a classic story and revamping it into something that plays like the original but is actually completely different is always an interesting choice, and in general, it works well here. It doesn’t seem like it should, but the idea of massive sailing ships riding solar winds across the void is actually pretty cool. The animation is top-notch, of course, and the film is immediately recognizable as a Disney film.

One of the major problems here is the vast number of alien races. I didn’t particularly mind seeing various aliens, but in this film, no two are the same. Jim, his mother, and John Silver are the only actual humans (and Silver only partly so). Every other creature is completely different. Captain Amelia is cat-like. Dr. Doppler has dog features. Mr. Arrow looks like a golem. There are frog creatures, squid creatures, spider creatures, big ones, little ones, and even one that speaks with flatulence. One wonders about the sort of entertainment available in the average port when it’s evident that every single person involved in the film is his, her, or its own distinct type of critter. For that matter, Jim’s mother is drawn so young looking that there is almost (not quite) an incest vibe between them. My daughter happened to walk through at the end and wondered if she was his mother or his girlfriend.

Second, and this is a far more serious problem, for as much as the film gains from using a known story very much limits what could be done with its interesting premise of sailing ships in space. It gains from having a familiar tale, but because the tale is familiar, anyone who knows it knows pretty much how we’re going to end. There are plenty of interesting options that could have been explored here that simply weren’t because we have to stick to the story that brought us.

Sadly, for as entertaining as Treasure Planet is, the film was a box office disaster, losing close to $80 million and becoming Disney’s largest financial loss. This effectively cancelled any hope of anything more being done with the universe, or even a direct-to-DVD sequel. While hardly a perfect film, it’s better than its financial loss would indicate. Damn shame, that.

Why to watch Treasure Planet: A traditional story with one hell of a fun premise.
Why not to watch: It doesn’t do enough with that premise.

Posted by SJHoneywell at 6:38 PM