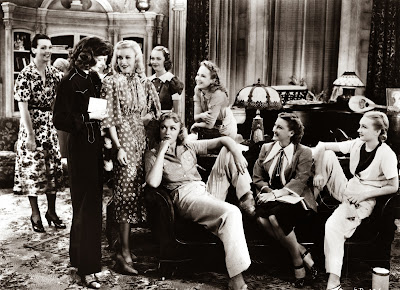 When I set up my NetFlix queue, I frontload it with all of the movies that have a long (or longer) wait time. This sometimes means that I end up with the film I had 30th on the queue, but sometimes it means that one of these rare films suddenly appears. Such was the case with Stage Door, a film that I fully expected would take months to finally show up on my doorstep. I went into this cold, knowing only that it was nominated for a couple of Oscars and that it starred Katherine Hepburn. What I discovered was something of an unexpected treat.

Most of our action takes place in a boarding house for young actresses in New York. All of the girls are struggling, most are between jobs, and all of them are particularly catty when the situation calls for it. There are a few of primary interest to us. First is Jean Maitland (Ginger Rogers), who would like to make it as a dancer. Jean has a particular animosity for Linda Shaw (Gail Patrick), mostly because Linda is dating the evidently married producer Anthony Powell (Adolphe Menjou). Also in the mix is the acid-tongued Judy Canfield (Lucille Ball), the aged Catherine (Constance Collier), and the talented but out of work Kay Hamilton (Andrea Leeds), who is the tragic part of our lighthearted collection. Into this mixture comes Terry Randall (Katharine Hepburn).

Terry is completely out of place in the fairly bawdy and rough-and-tumble world of the boarding house. For her, arriving in New York and living for $13/week is a something of a grand adventure. This is because Terry is the child of extremely wealthy Midwestern parents who do not approve of her desired life on the stage and have determined to do everything they can to curtail her efforts of being an actress. Things are tense initially when Jean takes an instant dislike to the haughty and cocky Terry, especially when the two end up as roommates.

What follows is sort of a genius confluence of events. Anthony Powell gets a good look at Jean and decides that he’d like to upgrade from Linda. Jean isn’t keen at first, but money and fancy dinners have a way of swaying her. Around the same time, Kay attempts to audition for Tony Powell but is rebuffed, and she faints in his office from fatigue and malnutrition. Terry arrives at this moment and dresses the producer down as thoroughly as she can, which increases her stock at the boarding house. Kay is convinced that she is perfect for Powell’s new play, but there are other forces at work. Hoping to convince her to return home, Terry’s father backs the play, but only if Terry gets the lead role, the one Kay wants. The hope is that Terry will be so terrible that she’ll be forced to return home.

I’m not going to describe the last half hour except to say that Stage Door takes a very dark and serious turn. This doesn’t sour the drama at all, but it does effectively change the tone of the film from what has been a dark and sardonic comedy into the realm of serious drama. The ending, though, is the real weak point of the film. It’s part and parcel for when the film was made, allowing for something like a triumph out of the ashes of despair, and it does so in a way that is pure 1930s Hollywood in that it’s completely unrealistic.

It’s almost certainly the dramatic turn in the third act that made Stage Door a Best Picture nominee and got director Gregory La Cava his nod as well, but for me, this is the weakest part of what had been a perfectly entertaining little show biz comedy. The wisecracks and insults between the women in the boarding house are a lot of fun, and the pace of the remarks is almost difficult to keep up with. Both Ginger Rogers and Lucille Ball are nearly perfect in their timing and their delivery, and Katherine Hepburn is easy to dislike as a snobbish child of privilege. This, keeping things moving and fun, is where Stage Door really succeeds.

It’s worth noting that evidently Stage Door has very little to do with the play on which it was based. Many of the character names are the same and much of the action takes place in a women’s boarding house, but most of the actual plot is a complete fabrication for this film. As someone not really up on the stage dramas of the age, this didn’t bother me a whole lot, but I could see that easily becoming a problem for any purist in the audience.

One the whole, I was pretty pleased with what I got here. Stage Door, while it finishes at a pace and quality below where it starts, is well-acted and entertaining all the way through. If you’re interested in films of this era, you could do a lot worse than queuing this one up at the top of your NetFlix list and seeing it when it eventually rolls in.

Why to watch Stage Door: Great dialogue and a surprisingly engaging plot.
Why not to watch: Evidently, it has about as much to do with its source material as I do.