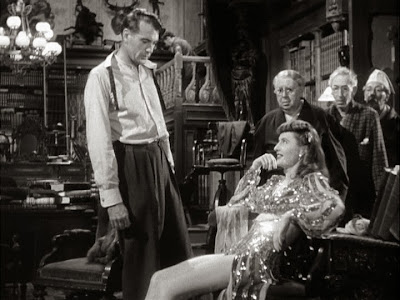 So I had these fantastic plans. I was going to watch Driving Miss Daisy tonight, and then tomorrow I was going to post a complete list of the Best Picture winners ranked from worst to first. However, the disc I got from NetFlix today was cracked down the middle, meaning I still haven’t watched Driving Miss Daisy. So, hooray for the backup plan—my DVR and the movies I’ve recorded from Turner Classic Movies. And when I’m this disappointed, a Barbara Stanwyck movie is sweet, sweet balm. So, Ball of Fire (also called The Professor and the Burlesque Queen) it is.

Ball of Fire is a screwball comedy of the old school in that it paints very broad characters who can’t really and don’t really exist in the real world, puts them in crazy situations, and seeks not to educate but to entertain. I like some screwballs and dislike some others, but since this one features Barbara Stanwyck playing a burlesque singer, I’m predisposed to like it. I can take or leave the Gary Cooper connection.

We start with a collection of eight learned but extremely sheltered men. These eight men, headed by the young but in many ways most stern Professor Bertram Potts (Gary Cooper), are hard at work putting together an encyclopedia at the behest of a foundation. They’ve been hard at work for eight years and are in the middle of the letter S when their musings are interrupted by their garbage man. He’s looking for a little help on a quiz, and the eight professors are able to give him the answers he’s looking for. However, the speech pattern of the garbage man are unlike anything the men have encountered. This is a huge problem for Potts, the grammarian of the group, since he has just finished his article on slang, and none of what he included is in the current slang. He makes the decision to explore the world and look for new slang and to find people who will come and help him understand all of these new words.

One of those places he ends up is in a nightclub where he catches the act of Sugarpuss O’Shea (Barbara Stanwyck). He’s naturally attracted to her, but he’s also fascinated by the language in the song that she sings (and while it pains me to say this, Stanwyck isn’t much of a singer). After the show, he approaches her, asking her to help him with his article on slang. Meanwhile, Sugarpuss discovers that her gangster boyfriend Joe Lilac (Dana Andrews) has been implicated in a murder and she needs to vanish because she can be made to testify against him. Naturally, Sugarpuss takes the professor up on his offer and decides to stay at the house where the eight men live and work.

Of course, this causes all sorts of problems for everyone involved. She teaches the old men how to do the conga and while each of the professors is enchanted by her, it’s Professor Potts who falls hard for her, and this is, while not requited at first, at least appreciated. Meanwhile, Joe Lilac decides that if he marries Sugarpuss she won't be able to testify against him, so he sends his men Asthma Anderson (Ralph Peters) and Duke Pastrami (Dan Duryea) around to bring her up to speed and keep tabs on her. And, of course, nuttiness ensues, in this case because Professor Potts becomes convinced that Sugarpuss has fallen for him.

Okay, so this isn’t heady stuff, and there’s not much going on here that takes a lot of thinking to understand. I’m okay with that. Ball of Fire is a complete puff piece, designed specifically to be entertaining and funny and cute and nothing more. All of the professors are straight out of the cliché vault. Each one is completely enamored of his own particular specialty and is unable to talk about much else. They’re all movie academics, all book smart and life dumb, none so much as the stiff and formal Potts. And for her part, Sugarpuss O’Shea is bawdy and raucous to the point where it’s difficult to see a real person beyond the persona.

And you know what? It doesn’t matter. Ball of Fire is fun and cute, and that’s really enough. It doesn’t try to be anything it isn’t. If you don’t know within the first minute of Potts encountering Sugarpuss that the two are going to end up together, you need to watch more movies. And that’s okay, too. I didn’t expect something that would engage me mentally. I wanted something funny and softball, and that’s exactly what this is.

Everything works here, almost in spite of itself. And I love that the professors get to use their specialties to foil the bad guys in the end.

Yeah, it’s not like it’s going to rewrite the way movies are made or stories are told, but it’s entertaining and silly. What else do you need?

Why to watch Ball of Fire: Because Barbara Stanwyck was a sexy beast.
Why not to watch: Like all screwball comedies, it bears no resemblance to reality.