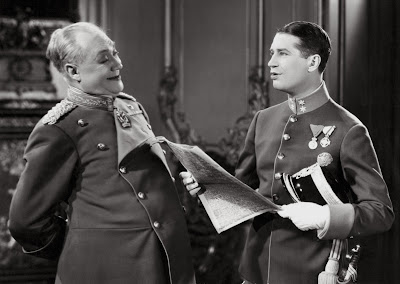 I tend to like the films Ernst Lubitsch, but there tend to be exceptions. The Smiling Lieutenant is one of those exceptions, although only a mild one. I went into this with the hopes of enjoying a Lubistch film the way I have in the past. I hoped for a surprise along the lines of Trouble in Paradise. That was probably too much to ask for, because not a lot of films are that good. The Smiling Lieutenant pissed me off for about half an hour and then got a lot better.

The plot is simple enough. Niki (Maurice Chevalier), a lieutenant in the Austrian royal guard meets Franzi (Claudette Colbert), the leader of an all-girl orchestra. The two are soon an item, playing chamber music together in the evening, a different kind of music overnight, and singing to each other over breakfast. One day, the king of a neighboring tiny country, King Adolf XV (George Barbier) is visiting with his daughter, Princess Anna (Miriam Hopkins). While they are on parade, Niki winks at Franzi, but Anna is convinced that he meant it specifically as an insult for her. Called on the carpet and unwilling to admit that he was playing visual footsie with his girlfriend, Niki says that the wink and smile were because of the incomparable beauty of the princess. And so, the naïve princess immediately falls for the dashing lieutenant and demands that he marry her. To prevent an international incident, he does, and that’s where the fun really starts among Niki, Franzi, and Anna.

While I didn’t love this film, it wasn’t completely dismal. One of the joys of pre-Hays Code films, and romances in particular, is the amount of double entendre that manages to sneak in under the radar. After their first evening together, Franzi turns to go and suggests dinner the next night. He replies that he’s so hungry, so maybe they should have breakfast together. There may have been a naïve few who missed the implication there back in 1931, but the meaning is pretty obvious, and that’s pretty great.

One of the big issues I have here is that the songs really aren’t up to the standard of other musicals of the era. We open with Niki belting out a song about how he and his fellow soldiers don’t really have to go to battle, so they go to battle with women instead. Later, we get a song between Niki and Franzi over breakfast—how they swoon over the spoons and like it most when eating toast. I was embarrassed for both of them, because that one was pretty wretched.

Anyway, things get a lot better when Niki gets in trouble with King Adolf and the weird little love triangle starts up. It is still completely tied up in being a film from the very early 1930s, so it can’t go too far in the direction Lubitsch obviously wants to take it. It’s also clever in the sense that the complications arise not simply because it is a love triangle, but because of the political implications of everything going on. That’s typical Lubitsch. He was never content to make something too simple or simplistic. His films tended to be more layered and complicated, and thus much more interesting. He’s also smart enough to give us hints at what is really going on in the places where the camera isn’t rolling. When Franzi determines that Niki is going to be forced to marry the princess, she collects her things from Niki’s apartment, which includes her raiding an underwear drawer, and there’s a reason that the memento she leaves him is her garter rather than something else. Again, this is typical for Lubitsch.

Ultimately, I think as much as could be done with a fluffy little story like this one was done. It’s biggest problem is that it’s just not enough of a film to really be that satisfying, no matter how much Lubitsch tried to put into it. It’s worth saying that while Maurice Chevalier may have been the draw here, the best performance comes not from him but from Claudette Colbert, who sells both her infatuation and her heartbreak completely.

I ended up liking The Smiling Lieutenant a lot more than I thought I would based on the first half hour, but it’s still not a film I would rush out to watch again. I would see it again, but it wouldn’t be my first choice from its year, from its director, or from its principle players.

Why to watch The Smiling Lieutenant: Lubitsch didn’t make bad films. Not really, anyway.
Why not to watch: This is lesser Lubitsch.

Posted by SJHoneywell at 7:55 PM