This is the first in a monthly series of reviews suggested by Nick Jobe at YourFace. 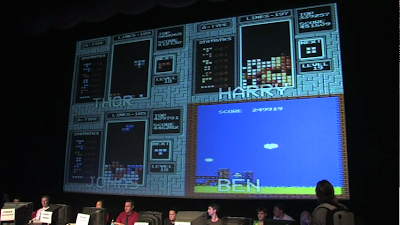 It’s a not-very-well-guarded secret that I spent 12 years of my life deep in the world of video games. I spent a lot of time playing a lot of games from 1991 to 2003. One of those games was Tetris. I remember when Super Tetris was released for the PC. I remember the different variations (Welltris, Wordtris, Hatris, Faces…tris…). I met and interviewed the game’s creator, Alexey Pajitnov. When Nick suggested that I watch this, I was really interested. I was a decent Tetris player, but not world class. Having now seen Ecstasy of Order: The Tetris Masters, I know that I’m nowhere near the class of the people shown here. I specialized in real-time military strategy and first-person shooters anyway.

The whole point of the film is the creation of a tournament to crown the world’s first Tetris world champion. Former video game champion Robin Mihara organized the tournament and sought out the best players of the game, including Thor Aackerlund, the first winner of the first Nintendo World Championship.

This is a strange and fascinating ride. The most obvious thought about the people who dedicate such massive amounts of their lives to a single 20-year-old video game is that there would be a level of OCD. That would be wrong. Certainly there is a quest for perfection, but perfection in Tetris is evidently messy, and the player needs to be willing to accept a great deal of messiness to play well. That said, there is a level of obsession here that is difficult to understand but fascinating to observe.

There is a natural similarity to a film like King of Kong, and Ecstasy of Order does pay a little homage to the earlier film. There are several things here that are just as surprising as the lack of OCD in the competitors. One is how normal many of these people are beyond the Tetris obsession. Certainly many of them are pure geeks, but pure geeks are my people. Three’s a surprising lack of social awkwardness. The other surprise, considering how male-dominated video games and the video game world tend to be is that several of the top players are women (a comment made by one person in the movie).

What surprised me most about this is how damn gripping it is. I was completely invested in the final tournament. With multiple people I had come to know in the course of the film, I genuinely wanted certain people to make the finals. As with any sort of competition, there are enough interesting stories to go around—people looking for redemption, respect, or perhaps just peace of mind that their obsession has never allowed them. The final 20 minutes are as compelling as anything I’ve watched recently.

But here’s what surprised me the most: I like every person in this film. They all seem like really decent people, like they’d be interesting to talk to and hang around with. There’s not a single villain in the film. Thor Aackerlund, the former Nintendo champ, is initially set up as a potential bad guy, or at least a crank, until we meet him. And we find out about the difficulty of his young life. He seems like a regular guy who almost wants to live down his past and be treated like just a person. He’s given something like the Billy Mitchell treatment in King of Kong, but by the end of the film, we’re rooting for him as much as we are everyone else. When one competitor sneaks into the finals, we’re happy, except that this knocks out someone else. It’s nearly impossible to dislike any of the competitors.

This is highly recommended. If you’re one of the 33% of the world who has never played Tetris (even my dad has played Tetris), you’ll still find a lot here worth seeing. You might well be put off by the nature of the topic and what you think you’re going to see, and you’d be really, really wrong. And hey, it’s on free Hulu. What do you have to lose but 93 minutes of your time?

Why to watch Ecstasy of Order: The Tetris Masters: Obsession is always fascinating.
Why not to watch: You’ll see falling blocks in your sleep.