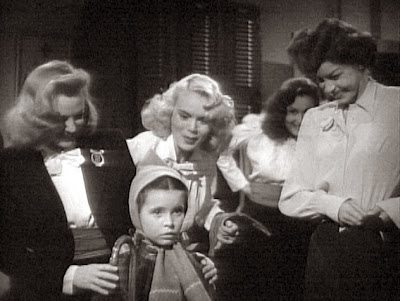 Music for Millions is a film I frankly can’t figure out. I mean, I kind of get it, but I also really don’t. There’s a plot here, although it’s a pretty sparse one. A great deal of this film exists specifically to give the audience a chance to hear some really good music played very well. Another chunk of the film exists specifically to allow Jimmy Durante the opportunity to be Jimmy Durante. The rest of it seems to be an advertisement for St. Christopher and Jesus.

Okay, I realize that from an atheist perspective that sort of thing is going to be annoying in the best of times, but in Music for Millions we’re essentially told that all you have to do to get what you want is pray really hard for it, and maybe give up something like ice cream as if you were having your own personal Lent. The bulk of this odious philosophy comes out of the mouth of the youthful Margaret O’Brien. O’Brien was disturbing as the pseudo-sociopathic Tootie in Meet Me in St. Louis, but in this film I actually loathed her.

Briefly, here’s the story. “Mike” (O’Brien) arrives in New York to visit her sister. Since she is a child, she draws a lot of attention. Eventually, she reveals to various people at the train station that her sister Barbara (June Allyson) plays with the symphony, so a cop takes her there. Unrestrained by sanity, decorum, or good sense, Mike walks out on stage while the orchestra is playing because she wants her sister. Now.

This disturbance comes to the attention of conductor Jose Iturbi (playing himself). He wants to fire Barbara for the distraction, but he’s persuaded otherwise by Andrews (Jimmy Durante). After all, most of the men in the orchestra have been drafted for the war, and decent bass fiddles are difficult to come by. Barbara and her various roommates sneak Mike into their boarding house. Soon after, Barbara seems overcome and faints. It turns out she’s going to have a child by her husband Joe, who is off fighting in the South Pacific. She’s worried (y’know…war) in large part because she hasn’t received a letter in ages.

Eventually, a telegram comes, and it’s the bad kind that arrives during a war. The various roommates intercept it and hide it from Barbara because she’s not supposed to get any serious shocks while pregnant. And through all of this Mike counsels constant prayer and giving up ice cream to make God grant wishes. And now I’m going to spoil the ending, so if you really don’t want to know, skip a bit. Seriously, though, this film deserves it.

Of course, the wisdom of children proves to be accurate. Despite the letter from the War Office saying that Joe is taking the big dirt nap, it turns out he’s fine. Why? Well, if you follow the logic of the film, it’s because Mike skipped ice cream when she really wanted some and asked a lot, especially using the word “please.” So, evidently, the Big G can retroactively resurrect someone because a kid decides to skimp on the tutti-frutti.

I’m sorry, but that’s absolutely offensive. If you can’t figure out what’s offensive about that basic philosophy, you’re not allowed to read this blog any more.

Anyway, the good news is that not everything is as dreary as the plot. The music is actually really good. Jose Iturbi is a hell of a good conductor and a tremendous piano player, and he’s very much worth watching. Durante, also a good pianist, isn’t much of a singer, but that was his act. Sure, he sounds like he’s singing through a sandpaper cheese grater, but that’s part of his charm. What he lacks as a singer he makes up for by being wildly entertaining.

Even so, I can’t in good conscience recommend Music for Millions. If there was a cut that trimmed out the plot, Mike, telegrams, and Jesus, it would be worth it for the music. Otherwise, pass.

Why to watch Music for Millions: Great music and the presence of Jimmy Durante.
Why not to watch: It gets sappy to the point of physical pain.