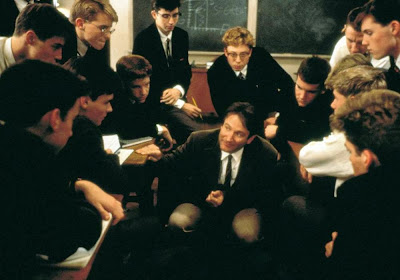 I’m a teacher and more specifically an English teacher, which means that I’m supposed to love Dead Poets Society. I don’t. I don’t hate it, but I don’t love it. There are plenty of things to like about it, of course, and there are a few important discoveries in this film, like the fact that Robin Williams can offer up a solid, restrained performance when under the direction of someone who keeps his manic persona under lock and key. But there are problems here, which we’ll no doubt get to as we proceed.

We’re set in the late 1950s at an all-boys boarding school somewhere in the wilds of New England. We are quickly introduced to our young protagonists, a motley assortment of the progeny of the upper crust of Eisenhower’s America. Of primary importance are Neil Perry (Robert Sean Leonard), who is bright and outgoing and suffers from a demanding and tyrannical father (Kurtwood Smith) and Todd Anderson (Ethan Hawke), who is ignored by his parents and living in the shadow of his graduated brother, which makes him shy and unsure of himself. Of secondary importance are the lovelorn Knox Overstreet (Josh Charles) and the wannabee radical Charlie Dalton (Gale Hansen). Rounding out the group are the suck-up Richard Cameron (Dylan Kussman), the nerdy Steven Meeks (Allelon Ruggiero), and the dorkish Gerard Pitts (James Waterston).

Into this mix we throw the newly minted English teacher, John Keating (Robin Williams), whose name is absolutely supposed to make you think of John Keats. Keating is unorthodox to say the least. He famously stands on his desk, has his students rip pages out of their textbook, and has them walk around the school courtyard or play soccer out in the field while reciting poetry. Naturally his methods are in conflict with the staid traditions of the school and just as naturally his students love him.

Keating, while tossing around some poetry, commands the young men in his tutelage carpe diem. They do this by various methods. Knox runs after a girl he has fallen for, risking life and limb to be near her. Charlie proffers some ill-advised writing in the school paper. But it is Neil who takes the advice to heart. Suffering under the demands of an overbearing father who demands he become a doctor, Neil instead forges a letter of permission and gets a part in a play being produced locally.

The centerpiece to all of this is the titular Dead Poets Society, an organization Keating was in during his time as a student at the school. The boys sneak away from the campus in the middle of the night and wander off to a cave where they sit and read poetry to each other. The movie makes this seem much more daring and a bit cooler than it sounds written here. Anyway, eventually a number of the boys get in trouble (some quite serious) for their various forms of rebellion, a few terrible events happen, and everything comes to a head.

Now, since virtually everyone loves this film, I’ll mention the good stuff. First, the performances are regularly solid all the way through, and Robin Williams is a stand-out from top to bottom. This may be his first truly great performance. Good Morning, Vietnam was an earlier film, but for much of that, Williams seemed to be playing himself. Bits of his stand-up routines come out in this film, but it’s a much more restrained performance overall, so most of it comes through as positive. The students, all relatively young and inexperienced actors at the time of filming, are generally good. Ethan Hawke is a bit too tentative for many moments and Robert Sean Leonard is far too self-possessed for a kid that browbeaten by his parents, but it’s really neither here nor there. It’s a good script, too.

But there are some places where I find it to be lacking. First, at least from my perspective, is the reliance on too much of the poetry that everyone knows. There’s not much here that many viewers will not have heard at least once. Beyond that, there’s way too damn much Walt Whitman. I’m not a fan of Whitman. Most of his poetry seems to be self-serving; he’s like the original bad rap artist who does nothing but rap about how awesome he is as a rapper. And while this is, admittedly, the Dead Poets Society, they couldn’t bring in anything modern? Charlie, with his radical sensibilities and saxophone would be a natural for the Beats, and should have given us at least the first couple of lines of Howl. No. Instead it’s Whitman, with a line or two by Byron or Tennyson tossed in for good measure.

A larger point is Keating himself. He’s supposed to be teaching these boys literature, and poetry in the specific. There’s no reason for him to decide to become their life coach. The school wanted an English teacher and instead hired a motivational speaker. No one has a teacher this inspiring. No one. I’ve had some excellent teachers in my time, some of whom I still speak with at times. These are people who encouraged and inspired me and who taught me a great deal during my time with them. None of them felt it necessary to stand on a desk or make me kick a soccer ball. For this I am actually quite grateful.

The worst moment of this is when Keating introduces the boys to Shakespeare. The boys groan and Keating acts like Robin Williams for a moment. Cut to the next scene, and they're all crowded around him while he reads, laughing on cue after every line. Sorry, I don't buy it.

The biggest sin, though, is that Dead Poets Society goes for the emotionally easy way out. It sets up a situation and then gives us not a difficult resolution or one that requires us to make any real decisions, but one that is driven entirely by the emotions of the moment. There can be only one way for this film to end, and we land there on the nose.

As I said at the top, I don’t dislike this film. It’s damn well made. I’m just supposed to love it, and I really don’t.

Why to watch Dead Poets Society: Proof that Robin Williams can act when reined in.
Why not to watch: It overplays its emotional hand.