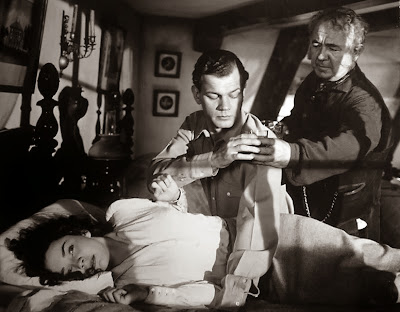 When looking through the full list of films that I have in the Oscar categories I’m following, I’ve found a number that are difficult to locate, making this enterprise similar in many ways to the 1001 Movies List. My secret weapon is Turner Classic Movies. I’ve been finding multiple difficult to locate films every month on Turner and my DVR is my new best friend. When Love Letters cropped up on Turner, I knew I had to record it, and since there are a bunch of films I want to see in February, I’m being diligent in watching and erasing films from the DVR when I can. I can’t say I was thrilled about Love Letters going in, but it was watch it now or watch it later.

This is a very strange movie. It’s essentially two slices of romantic bread with a creamy mystery filling. We start during World War II. Roger Morland (Robert Sully) has met a young woman named Victoria on leave. Unable to compose a convincing letter himself, he enlists the aid of fellow soldier Allen Quinton (Joseph Cotten) to write the letters for him. Quinton, already virtually engaged Helen Wentworth (Anita Louise), pours his heart into these romantic letters, calling Victoria a “pin-up girl of the soul.” He’s disturbed by what he considers Roger’s callous attitude toward the poor girl, so when Roger is returned to England and eventually marries the girl, Allen is visibly upset.

Things between him and Helen aren’t going well, either. Part of this is the situation between Roger and Victoria and part is his own introspection after being wounded in battle. In the mood for more introspection, he leaves to take over his aunt’s old house in the country. Before leaving, he is take to a party where he meets Dilly Carson (Ann Richards) and a mysterious woman known only as Singleton (Jennifer Jones). Heavily inebriated, he tells the story of the love letters he wrote, which sparks something in Dilly. When he heads off to the house, he discovers that it is nearby the town where his love letters went. Inquiring, he discovers that Victoria is dead, and so is Roger, killed in some rage or fit by Victoria.

Another trip to London and another encounter with Singleton and Dilly gives us everything we need to know leading to the end. First, Singleton finds Allan fascinating. Second, in private, Dilly tells us that Singleton has only the one name because she is suffering from amnesia. See, she actually is Victoria, the recipient of all of Allan’s letters from the front, and the woman he has come to love in his own mind without meeting her.

Believing Singleton/Victoria to be in a delicate mental state, Allan tries not to pursue her romantically, but is compelled to. Singleton finds herself attracted to Allan, but attempts to resist, knowing that he is in love with a woman named Victoria and not realizing that she is that same woman. Based on the time when this was written, it’s not hard to see how things are going to end up, but this is really all about the journey rather than the destination.

Once things started getting interesting with Singleton’s amnesia, I admit that I perked up a bit. We get a hint of that at the end of the first act, but it takes us a long time to get back to the mystery and the murder. This is a slower film than it needs to be through the first and second acts, although the third act more than makes up for this. The bigger disappointment, at least for me, is that Love Letters downplays this interesting mystery angle by boosting the romance angle more than it needs to. That’s already inherently interesting. Probing the mystery has more meat on it, and this information comes too slowly to be completely satisfying all the way through. While not a bad film by any stretch (Joseph Cotten cures a lot of ills), it’s also one that is only a fraction of what it could have been with some different direction in the story.

Jennifer Jones earned a Best Actress nomination for this, and that’s something that both makes sense and is its own mystery. On the one hand, she’s only important in the second half of the film. We go for a good 30 minutes or so with her making only a token screen appearance and we’re closing out the first half when she becomes an important character. However, Oscar has always had a penchant for nominating performances where the person in question plays someone physically or mentally handicapped in some way. Toss in roles as prostitutes and you have what seems like half of the Best Actor and Actress categories.

On a completely unrelated note, the screenplay was adapted from the original novel by Ayn Rand. Yes, that Ayn Rand. Who knew?

Why to watch Love Letters: The central mystery is really good.
Why not to watch: The romance is emphasized, and it’s less interesting than the mystery.

Posted by SJHoneywell at 7:18 PM