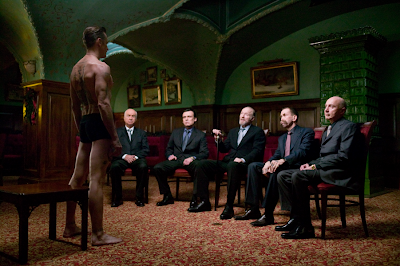 I’d seen Eastern Promises before, and I wasn’t looking forward to seeing it again. That’s not because it’s a bad movie; on the contrary, it’s a great film. It’s one of the best films of David Cronenberg’s career. No, the problem here is that it’s brutal and completely realistic. There are certain things that can happen in a film that bother me terribly. I can see blood and guts without any problem, but seeing someone get his or her throat cut really bothers me. Cronenberg, with his love of body horror, doesn’t just have people get their throats cut; he makes us really look at it. This is to say nothing of the brutal fight in the bathhouse. This is the definition of a hard watch.

Eastern Promises is almost a film noir, albeit an astonishingly brutal one. It starts simply and quickly devolves into something horrible but fascinating. A young girl is taken to the hospital because she is bleeding. It turns out she is both underage and pregnant and about to give birth. Complications in the birth kill her, but the baby survives, a Jane Doe at birth. All of this is watched by Anna (Naomi Watts), a midwife who works at the hospital. She finds a diary written in Russian on the girl’s body and takes it to her uncle Stepan (Jerzy Skolimowski) to have it translated. He balks after reading a few pages, since those few pages are filled with accounts of drugs, prostitution, and rape.

Frustrated and wanting to know the baby’s origin, Anna takes the diary to a Russian restaurant, since the diary included a business card from it. It is here she meets Semyon (Armin Mueller-Stahl), who runs the place. Also present are Kirill (Vincent Cassel), Semyon’s son and Nikolai (Viggo Mortensen), their driver. Semyon is very interested in the diary and asks Anna to bring him the original so that he can translate it.

Of course, Semyon and Kirill are vyor, or Russian mob. Nikolai, in addition to being their driver, is also the man who handles taking care of bodies that need disposing. And there is one—we see someone killed in the opening few minutes of the film. It turns out that Kirill ordered a hit on a Chechen vyor, and the hit was unauthorized. This has caused friction in the Russian crime community, forcing Semyon to make a terrible deal, essentially offering up Nikolai in place of his son. At the same time, Anna gets the translation of the diary from her uncle and discovers that while Kirill abused the dead mother of the baby, it was Semyon who raped and impregnated her. And suddenly her uncle Stepan is missing.

I won’t go into much detail beyond that. If you haven’t seen Eastern Promises, the last 20-30 minutes are worth experiencing without spoilers. If you have, you know exactly what I’m talking about.

This is one of Cronenberg’s great films, and it’s one that seems both unusual from the man who made Rabid and The Brood and also a natural extension of his oeuvre. In a sense, this is a film that moves him further out of the niche of weird body horror and more into the mainstream, but manages to keep his vision of body horror intact. Eastern Promises doesn’t pull any punches anywhere. The violence is up front, sudden, and incredibly nasty. It’s a film that makes me cringe in places because it is so real.

The scene that everyone talks about is the fight in the bathhouse, and for great reason. It’s the scene in the film that shows us a great deal of who Nikolai really is. Nikolai sits in a sauna clad in only a towel and is attacked by two assassins sporting very cruel curved knives. What happens is painful to watch and awful, and happens without speech and without music, forcing us to listen to every horrible sound and slash and breaking limb. While the most pivotal scene in the film, it’s also one that I don’t look forward to and that I spend watching from the fetal position.

Eastern Promises is a difficult film to recommend, but it’s also one that is absolutely worth seeing. The difficulty in the recommendation isn’t from any lack of quality or a poor story, but strictly because it is hard to watch. This is not “fun” violence, but real violence. It is sudden, nasty, and awful. And yet the story is fantastic. Naomi Watts is as good here as she is anywhere else, and Viggo Mortensen may be better here than anywhere else, and that’s saying something.

If you haven’t seen it, it’s worth your time. Don’t plan on a fun night or a bowl of popcorn, though. Plan on being kind of dazed afterwards and going to bed soon after.

Why to watch Eastern Promises: The hardest of the hardcore crime films.
Why not to watch: Even in a non-horror film, Cronenberg can’t avoid the body horror.