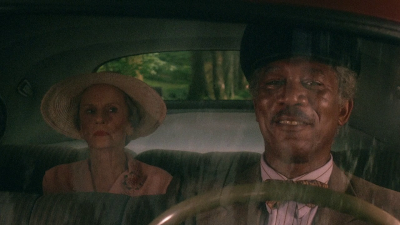 We open with the titular Miss Daisy Werthan (Jessica Tandy) losing control of her car and miraculously managing to get away without injury. Based on her declining skills, her son Boolie (Dan Aykroyd) decides that she needs someone to drive her. The person he chooses is Hoke Colburn (Morgan Freeman). Miss Daisy is none too pleased about having a chauffeur and equally upset with the choice being Hoke; despite her frequent protestations that she isn’t prejudiced, she certainly holds some views that are not far from in keeping with the 1940s Georgia society she lives in.

Eventually, she accepts Hoke, who becomes more and more useful around the house for her. She learns to accept Hoke as a driver, and then as someone who does additional odd jobs as needed and sometimes assists her cook, Idella (Esther Rolle). When Idella dies suddenly, Miss Daisy opts to keep house for herself, with Hoke helping her as needed. As time passes and Daisy succumbs to dementia and age, Hoke manages to stay with her as much as he can. And along the way, Daisy starts to confront her own mild racism and prejudice, particularly in the context of Southern society’s own prejudice against her as a Jew.

So I’ll be blunt here—I like a lot of the people in this film. I don’t have a solid opinion on Jessica Tandy because I’m not familiar with much of her work, but anyone who doesn’t like Morgan Freeman is immediately suspect in my world. Dan Aykroyd is good when he’s given a good role to bite into, and he’s got something to work with here. But I didn’t have massive expectations for this. It seemed on the surface too much like it would be a film for the same sort of crowd as Terms of Endearment. Someone driving an old woman around town is pretty far out of my wheelhouse for what I would typically enjoy.

And Driving Miss Daisy is a very slow film. The plot moves along just fine, but this is not a rip-snorting action film, a hot-blooded romance, or much of anything else beyond the relationship between Daisy and Hoke and the growing mutual respect and eventual friendship between them. Even a film perfectly made in this vein would be slow and not the sort of thing I would normally choose to watch. I’ll go so far as to say that had it not been nominated for Best Picture let alone won, Driving Miss Daisy wouldn’t have been anywhere near my radar.

That makes it a bit of surprise that I enjoyed it as much as I did. I’m not saying that I’m hot to watch it again, but this is absolutely a film that I wouldn’t be ashamed to recommend. It’s good, and it’s good not because of the story, but specifically because of the performances throughout. Everyone here is good, and all of the characters are given suitable dimension that they come across as real people.

I was even aware that the film was attempting emotional manipulation by the end, and it still manages to work. The closing scenes are actually quite sweet, in part because of the previous 90 minute of film and in part because of how naturally they are played.

That said, that’s really it. There’s not a lot else going on here. Driving Miss Daisy is a good movie, perhaps even a very good one, but I’m not convinced it’s a great one. There’s little here beyond the slow-growing and unusual friendship and a few hints of racism, and I’m not sure that’s enough to catapult it into that rarified air of what makes a truly great film. Even when we discover things that could make a whole film—like Hoke’s illiteracy—we’re given a few moments, a quick uplift, and it’s immediately dropped.

In short, I liked it, but it’s got a long way to go to get me to say that I love it. See it for Morgan Freeman and Jessica Tandy, and do your best to ignore the “yas’m, no’m” attitude of Hoke.

Why to watch Driving Miss Daisy: Morgan Freeman and Jessica Tandy.
Why not to watch: The story is small enough to fit into a matchbox.