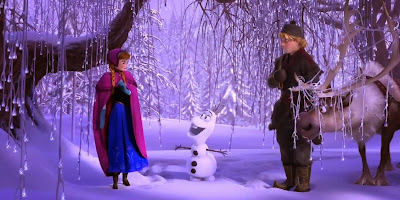 My older daughter has been obsessed with Frozen since the first time she saw it a few weeks ago. Since today was a snow day all around, I decided it was time that I saw it, too. So we went to an afternoon matinee, my two girls and me. Aside from the three teenage girls who sat behind us and talked through the first 20 minutes or so, it was a completely pleasurable time in the theater.

I didn’t see Tangled, which most people said was a return to form for Disney. If it hadn’t been, Frozen would be, because it’s about as good as the classic Disney films that everyone loves. It’s also very smart, which is even better than it just being good. There are plenty of good children’s films that don’t do anything terribly new or exciting, but Frozen stores up a brilliant curve ball at the end. The conclusion is very different from what we’re led to expect, and that’s a slice of brilliance.

We start with two young princesses, Elsa (Idina Menzel) and Anna (Kristen Bell). They are friends as well as sisters, and Elsa is blessed or cursed with the ability to create snow and ice on a whim. One morning while playing, Elsa strikes Anna with a bolt of ice in the head. Her parents rush her to a group of friendly trolls, the leader of whom cures Anna by converting her memories to get rid of the magic. From this point on, Elsa becomes a recluse, terrified of her powers and unwilling to show anyone. A few years later, the girls’ parents are killed in a shipwreck, and eventually Elsa comes of age and is to be made queen. Anna is excited for this, since it means that people will actually come into the palace, something she’s wanted for ages.

At the party, Anna encounters Hans (Santino Fontana) and the two immediately fall for each other. They rush to Elsa and ask for her permission, but Elsa denies them. Desperate, Anna clutches her sister and instead gets just her glove. With her hand exposed, Elsa’s ice powers go into overdrive, snowing in the entire kingdom and freezing the port completely. Elsa runs off into the mountains. Anna determines to go after her, leaving Hans in charge.

On the way up the mountain, Anna meets Kristoff (Jonathan Groff), an ice seller now out of business because of the freeze. Kristoff and his reindeer Sven are essentially hired by Anna to help her, and they get her up the mountain, but Elsa refuses to return. Still panicked, Elsa lashes out, hitting Anna in the heart with a bolt of ice. Kristoff rushes her back to the trolls, but this is a wound that can only be cured by an act of true love. Meanwhile, scheming back in the kingdom may mean a very short reign for Elsa and Anna both. Oh, and there’s an animated snowman named Olaf (Josh Gad) who provides a great deal of comic relief.

As I said above, the story is something straight out of the Disney playbook. We’ve got princesses, true love on a first meeting, and danger that can only be averted by true love. There’s magic and comedy and plenty of singing. But here’s the reason that Frozen is worth seeing—it very happily plays with our expectations, leading us down a garden path and throwing us a complete switch at the end, reaching a conclusion similar in some ways to what we expected, but getting there by entirely unexpected means. This is evidence of smart screenwriting, because the climax is both a surprise and completely logical. It’s not a cheat in the least, and the film plays it out without dumbing it down or explaining it too much to the audience. It assumes we get it, and it’s right.

Know what? The songs are good, too. Yes, this is me saying that.

It’s an unusual year when a straight Disney release eclipses the Pixar release, but that’s absolutely the case here. Frozen is a completely entertaining time in the theater. Take the kids and have a great time.

Why to watch Frozen: Disney back in form.
Why not to watch: Expect talking in the theater. It’s a children’s movie, after all.