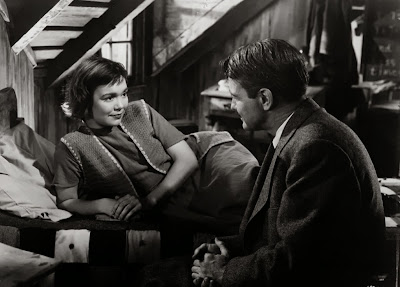 I really love my DVR, although I’ve found a problem with it. The blessing is that I can record things that are showing at 2:00 am or when I’m at work and watch them later. That’s also the problem—the watching them later part. I’ve got a nice collection of films just waiting for me to watch them, but other things always seem to take priority. Sometimes it’s another film that’s just shown up. Other times is that I’m not sure I want to subject myself to the subject matter at hand. Such is very much the case with Johnny Belinda.

Why? Well, Johnny Belinda has all of the elements of a film designed specifically to pull emotionally in pre-planned and obvious ways. The quick synopsis is this: a deaf girl becomes the project of a local doctor, who teaches her to read lips and speak in sign language. An evil member of the small community rapes and impregnates her, although everyone assumes the doctor is the father. Eventually, there is a confrontation with the real father. This is not the sort of thing I wanted to jump into with both feet, so it’s sat on my DVR for months.

That is the story here. Belinda (Jane Wyman) is a deaf-mute who works on the farm of her father, Black MacDonald (Charles Bickford). Black and his sister Aggie (Agnes Moorehead) resent Belinda for a number of reasons. First is her deafness, which makes everyone in the area assume that she is mentally deficient. Second is that Belinda’s mother died in child birth. Enter the new doctor of this small Canadian settlement, Dr. Robert Richardson (Lew Ayres), who sees the intelligence of Belinda and teaches her both to lip read and to use sign language.

But all is not rosy in this little town. While an outsider, Dr. Richardson is learning to be trusted with by the locals. He has no issues in this regard with Stella (Jan Sterling), who works for him. Stella has a bit of a crush on the doctor and can’t understand why he devotes so much of his time to “the dummy” Belinda when he could be spending time with her. Since she assumes that the doctor is out of her league, she instead focuses on Locky McCormick (Stephen McNally). Unfortunately for her, Locky seems a little fixated on Belinda, despite everyone assuming that she is mentally slow. One evening, when both Black and Aggie are away, Locky shows up at the MacDonald house and rapes Belinda, working under the assumption that she can’t read, write, or speak, and thus is a safe target.

Of course, Belinda winds up pregnant and eventually gives birth to a boy she names Johnny. And of course, this creates a scandal in the town. And since Dr. Richardson has been spending a great deal of time working with Belinda, the gossip is impossible to stop. For her part, Belinda refuses to tell anyone, including the doctor, the source of the child. This only causes the rumors to spread more rapidly. Ultimately, when the townspeople decide that Belinda (because they all still think she is feeble) is an unfit mother and Locky McCormick (now married to Stella) says he’ll take in the child, everything comes to a head.

My feelings on Johnny Belinda are split. There’s a lot here to like. Jane Wyman’s performance is a good one, since she is left with only her face as a means of expression for a good half of the film and is never able to speak aloud to express anything. Lew Ayres comes off as a bit too much of a white knight here, but it’s forgivable considering the time in which the film was made. I’m far more impressed with both the performances of Agnes Moorehead and Charles Bickford as well as where the script takes them. Black MacDonald, in particular, is immediate in his conversion to his daughter’s actual intelligence and his desire to protect her from the rest of the town (at least until he’s no longer in the picture). This is a great portrayal of people bound by a particular moral code and able to immediately see when it becomes immoral, and I love that about this film.

I equally appreciate that the film genuinely shows the mob mentality of the rest of the townspeople. The minute Belinda is known to be pregnant, the rumor mill starts, and what the mill churns out immediately becomes fact against all proof and evidence. This is realistic and mildly terrifying, and it’s a great thing to see here because the film doesn’t pull its punches.

So what’s the problem? Well, this is what Roger Ebert used to call an “idiot plot.” Everything could be cleared up with Belinda telling someone what happened. When she is threatened with the loss of her child, she needs to only tell people what happened, and there’s no more trouble. We’re shown over and over that Belinda knows how to write, so communication isn’t a huge problem here. And she can read lips, so she’s capable of answering questions. But for whatever reason—and this is what I don’t buy—she won’t do this. It could be claimed that she doesn’t understand what is going on, but I don’t buy that, either.

I liked Johnny Belinda, but I wish it had done something different with the plot. When the last half hour or so of the film can be solved with a short conversation, there’s a problem with the plot, or at least the script.

Why to watch Johnny Belinda: Great performances all around, and something like real family values.
Why not to watch: The whole plot could be solved in less than five minutes.