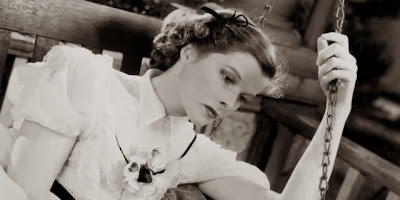 I’ve been surprised many a time by many a film, and I always do my best to come at each film with the hope of actually enjoying it. I went into Alice Adams cold, knowing only that it had Katherine Hepburn and Fred MacMurray in it and that it was nominated for a few Oscars. Having now seen it, I wonder why.

I’m not going to be nice to this film, so if it’s one that you like, I’ll suggest that you look elsewhere. I’m not going to apologize for disliking this film. It’s filled with the most repellent characters I’ve seen in a long time. I can’t imagine wanting to actually spend time around 90% of the people in this film. This isn’t a case of them having a particular bad habit or quirk—these are people who are almost designed to be as unpleasant as possible, and since this is a film from 1935, we’re guaranteed that these unpleasant people will wind up with a happy ending.

Alice Adams (Katherine Hepburn) is a “poor” girl in a town evidently filled with society people. Poor here is very much a relative term, since this was made during the height of the Depression and the Adams family has a house that’s large enough to have a back staircase. Alice’s father Virgil (Fred Stone) is no longer working because of an illness. Despite this and despite the Depression, his boss J.A. Lamb (Charley Grapewin) has kept Virgil on salary, allowing the Adamses to keep their house if not their social position. Mrs. Adams (Ann Shoemaker, no first name for the character is given) consistently hounds her ailing husband about quitting the job where he’s getting paid for staying home and starting his own business. Why? Specifically so that Alice can join society. The ugly secret of the family is brother Walter (Frank Albertson), who is a gambler and (gasp) hangs around with the black folk on the other end of town.

What passes for a crisis in this film is Alice having to attend the formal dance of an acquaintance in the same dress she wore the year before. It is at this dance that she first encounters Arthur Russell (Fred MacMurray). Arthur is immediately attracted to Alice despite warnings from others and despite the fact that he is virtually engaged to Alice’s “friend” Mildred Palmer (Evelyn Venable). Alice proceeds to “charm” Arthur by talking non-stop and putting on significant airs about herself, her family, and her social station. Despite this, Arthur begins to pursue her.

Meanwhile, Virgil Adams does go into business for himself, talking with him a glue formula he created that technically belongs to his former boss. At the same time, Walter Adams, owing $150 for gambling debts, swipes it from his boss, who happens to be the same J.A. Lamb currently coming after Virgil. While all of this is happening, the Adamses formally introduce themselves to Arthur Russell in a truly tragic dinner during which virtually everything goes wrong, not the least of which is Alice’s non-stop chatter and pretenses about living far above her current lack of means.

Of course this is all going to end happily for everyone involved except for those people who have been inadvertently screwed over by the Adams clan. In the middle of the film, there’s a conversation in the Palmer home when Mildred is trying to determine whether or not to invite Alice to a garden party. This scene is designed to show us how terrible the Palmers are to poor Alice, and specifically to show Arthur how terrible the Palmers are. Unfortunately, I got the impression that everything the Palmers say about the Adams family and specifically about Alice herself is the truth. She’s a social climbing little nit who frequently embarrasses herself with overblown importance and ridiculous behavior.

The overall intent of Alice Adams is singularly unpleasant. Consider for instance the situation of Virgil Adams. In the midst of a global depression, he gets sick. Despite millions of people looking for work, his boss keeps him on payroll and even hires his ne’er-do-well son. We’re given the impression that Virgil’s illness is not a temporary thing, that he’s been laid up for years, and yet he’s still drawing a salary. And J.A. Lamb is made out to be something like a villain here. That’s pure insanity.

It would be easy to complain about the racial issues in Alice Adams, but I won’t. In that sense, the film is very much a product of its time. Walter’s association with the non-white elements of the town may have been scandalous in 1935, but they aren’t today. And I got a particular bit of pleasure in watching Hattie McDaniel ruin the big meal.

But that’s not my issue with this film. My issue is that Alice Adams and her mother are unpleasant people. They’re needy, self-serving, demanding, pompous, and a host of other adjectives along the same lines. These are the sort of people who are social outcasts not because of their lack of income or Walter’s unsavory (for the time) associations, but because no one could bear to spend time around them. Hell, I’d have shunned them, too. But, because Alice is pretty, everything works out in the end and she gets what she wants, including Arthur Russell. Good luck with that marriage, since he’s evidently going to marry someone who is little more than a veneer of social arrogance over an empty (albeit pretty) shell.

Why to watch Alice Adams: Katherine Hepburn at the start of her career.
Why not to watch: The characters are truly awful human beings.