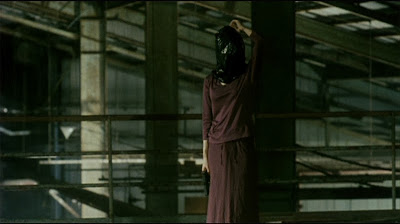 Like many people, I’m deeply upset by the now long-standing trend of American remakes of foreign films, particularly horror films. Such is the case with Kairo (Pulse), originally made in Japan in 2001 and shoddily remade about half a decade later in the U.S. I certainly understand the desire to put one’s own stamp on a good story, but I find this insta-remake trend bothersome. In almost every case, the remake is far less than the original. Even when the remake is good, the original is usually better. In the case of Kairo, it’s not too much of a stretch to suggest that M. Night Shyamalan cribbed from it when making The Happening, too, meaning that this has not one, but one and a half crappy remakes.

Kairo, like many a good horror film, has a simple, albeit strange, premise. In Tokyo (and eventually we’re told in the world at large), people are shutting down mentally, physically, and emotionally, and then suddenly disappearing. This all appears to be connected with a number of electronic media and devices. We start with Michi (Kumiko Aso), who works at a plant sales company. One of her co-workers has been missing for some time, so she goes to check on him. She finds him and a computer disk he has been working on. While she hunts for the right disk, her coworker calmly goes to another room and hangs himself.

Yabe (Masatosh Matsuo), another of her coworkers, tries to discover what happened to the first one after he receives a phone call from what sounds like his dead colleague repeating “Help me” over and over. He discovers a doorway sealed off with red tape. He goes in and encounters a ghost. Following this, Yabe becomes almost catatonic and eventually vanishes, leaving only a rough human outline of black soot on the wall where he last stood. When Michi’s third coworker Junko (Kurume Arisaka) encounters a ghost as well and dissolves into ash, we’re well beyond the point where we know something bad is going on.

This story is intercut with another involving a college student named Ryosuke (Haruhiko Kato), generally called Kawashima, who begins discovering similar clips of video online. When he first tries to sign onto the internet, he is taken to a series of short clips of catatonic people followed by the phrase, “Do you want to meet a ghost?” He seeks help from a computer science student named Harue (Koyuki). Another student (Shinji Takeda) offers the theory that wherever spirits go after death has, for lack of a better word, reached capacity, forcing those spirits to enter the material world. Meanwhile, more and more doors are covered in red tape around Tokyo and more and more people are disappearing after becoming emotionally catatonic.

Kairo is a deeply unsettling film. It’s not scary in the more traditional sense, but it is highly unnerving. Almost all of this is done with smart camera work and excellent use of sound. Frequently, when we encounter a ghost or something that looks like it could be a ghost, the sound drops away completely. We also only get glimpses of things. When one of our characters becomes the sooty wall splotch, we’re certain it’s going to happen a moment or two before it does and we see only a darkening of the character before it cuts away. As tends to be the case with the scariest and most interesting horror films, we don’t see the true horror. That’s left to our imagination, since we see only the edges. The scenes of the deserted Tokyo are similar to 28 Days Later from the same year.

In addition to its spectral horrors, there is an apocalyptic vibe to Kairo in the second half of the film as Tokyo becomes more and more deserted. We see Ryosuke in a video arcade at one point and it is crowded with people. He returns to it near the end of the second act and finds himself alone there except for a single shadowy presence. Soon, the appearance of a door outlined in red tape becomes not only a common sight, but one of dread as the small number of people we are left with become more splintered and fragmented. There is a real sense of a story like The Stand or Invasion of the Body Snatchers in places.

All of this is the point of Kairo, of course. While exploring things from the perspective of horror, this is very much a film about alienation and the separation of human beings either through or because of technology. After all, it is through the internet, through phones, through cameras that people encounter the spirits and lose their will to feel and eventually to live. Because this is a story that deals almost entirely with emotional reactions, it’s difficult to parse into words.

There are few real “scare” moments in the film but plenty of upsetting ones. It feels slower than it needs to be and a touch too long, and most of what I’d want to cut is in the last 30 minutes. Our two main characters of Ryosuke and Michi don’t even meet until we get to the third act. But it still works all the way through. It is in parts reminiscent of Ringu. This is certainly intentional.

Kairo is one of those unusual horror films that either works very well for its audience or works not at all. If it works for you (and it did for me), you’ll find a lot here worth thinking about once it’s done. If it doesn’t work for you, if it doesn’t regularly make you want to look over your own shoulder, you either lack imagination, or you’re made of much stronger stuff than I am.

Why to watch Kairo: It’s genuinely unsettling.
Why not to watch: You might get the shitty American remake instead.