The Hollywood Revue of 1929 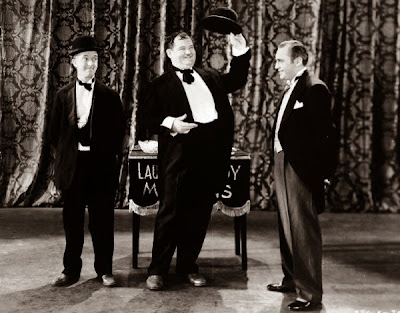 This is going to be rough. I’ve reviewed films that feel plotless before, but here is a case where I have a film that literally has no plot. The Hollywood Revue of 1929 is pretty much literally what the name says it is. This is vaudeville show presented on celluloid. It’s presented as if it were a show on a stage, complete with scripted gags and skits between musical numbers. A couple of these still work but most are horribly dated. There’s no behind-the-scenes romance, no villain. There’s just two hours of variety acts with a couple of camera tricks tossed in for fun, or possibly to prove that this was indeed on film and not live.

What’s more, the bulk of the acts here are people who may well have been famous in 1929, but whose fame has not managed to carry into the modern era. There are a couple who are still well-known enough to be interesting here, but the bulk of the singers and dancers have been lost to the ages. Joan Crawford, who belts out a song of dubious quality and then dances pretty well is an exception. Jack Benny, who acts as something like a master of ceremonies is another. Laurel and Hardy put in an appearance with a failed and mildly comic magic act and Buster Keaton does a slightly more comic dance routine. Beyond these, though, most of the names involved in this are not ones that roll trippingly off the tongue of most dedicated film viewers—even classic lovers.

For instance, what leaps to mind when I toss out the names of Gus Edwards, Polly Moran, or The Brox Sisters? How about Cliff Edwards? Marion Davies? Myrtle McLaughlin?

Interesting to me is that two of the feature performers here are Charles King and Bessie Love, fresh off their triumph in The Broadway Melody. Both have a few spots here to show off, including a number near the end. There’s a great deal of singing throughout interspersed with some weak comedic patter from hosts Conrad Nagel and Jack Benny. There are also a lot of big-cast dance numbers, most of them looking like pared-down Busby Berkeley or Flo Ziegfeld productions. There’s also an acrobatics act tucked in near the end.

I find it difficult to understand why The Hollywood Revue of 1929 would be nominated for Best Picture since this is a movie only in the strictest sense; it contains moving images recorded on celluloid. It is nothing more than just a stage show presented without comment, though. I understand why it was made—plenty of people would have heard of a number of these acts or would know them through radio, but might never have a chance to see them. In a more modern context, a film like Stop Making Sense was nothing more than a Talking Heads concert, offered with no commentary, and it’s a damn brilliant film. But Best Picture? I find that hard to fathom.

That said, it’s worth noting that the production values of this are far higher than that of the eventual Best Picture winner, The Broadway Melody. While many of the musical numbers in that film looked unrehearsed and slapped together, they are precise and well-choreographed throughout. Many of them, particularly those that didn’t employ the twee camera tricks like shrinking Bessie Love to fit into Jack Benny’s pocket or causing Marion Davies to appear Thumbelina-sized between the legs of dancing soldiers, were what The Broadway Melody really could’ve used. It sure as hell would’ve been more interesting than seeing that same Bessie Love standing on top of a ladder and not moving and then getting heaped with praise.

There were some moments here I didn’t really get, but there were enough that were interesting and worth watching. I’d be hard pressed to say that I enjoyed this as a film, but there were some acts that were worth seeing. It was also interesting to see the rudimentary Technicolor passages here, almost a shock for a film this old. For what it’s worth, this is also the debut film for the song Singin’ in the Rain, although here it’s played on a ukulele.

Why to watch The Hollywood Revue of 1929: Some of the acts are great.
Why not to watch: It doesn't feel like a movie.

Posted by SJHoneywell at 7:37 PM